When the Mary Rose set out from Portsmouth on 19 July 1545 to repel a French invasion fleet, she was a battle-hardened flagship looking back on 34 years of successful service to King Henry VIII. She had fought in campaigns against France, Scotland and Brittany and was still relatively fresh from a re-build 10 years prior. 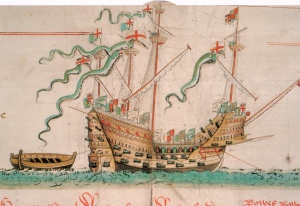 Peroid illustration of the Mary Rose

Yet, on that day, she sunk within sight of port in the Solent sea channel between Portsmouth and the Isle of Wight. Many theories exist about why she went down so quickly – human error, the wind and tide, French firepower – and we’ll probably never know the exact reason.

But thanks to the efforts of conservators, archaeologists and scientists over the past 35 years, the Mary Rose provides a veritable time capsule of technology, medicine and socioeconomic conditions in 16th Century Britain – which is now on public display in Portsmouth Historic Dockyard and inspiring a new generation. 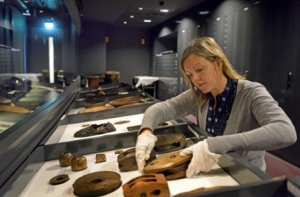 Dr Eleanor Schofield is Head of Conservation and Collections Care at The Mary Rose Trust in Portsmouth. She is in charge of keeping the ship itself and the wealth of artefacts in the best possible condition and is responsible for instigating fresh investigations and research into the collection.

Although Eleanor was only a small child when the Mary Rose was excavated in 1982, she has inherited the legacy of the conservators and volunteers who came before her.

After its excavation, the Mary Rose was initially put into passive storage and constantly kept moist with chilled water. It was then then sprayed with a polymer called polyethylene glycol (PEG).

“Whilst the structure can look quite intact, there is actually a considerable amount of wood matter that has been lost, and when it was excavated it was essentially being held up by water. If you simply dried it, it would shrink and basically collapse. So, you must replace that water with PEG,” Eleanor says.

“After being sprayed for many years with PEG we started drying it out around four years ago. There’s always some movement associated with drying so we need to monitor that constantly. We’ve currently got an Imperial student working over the summer to monitor the movement from  laser scans, to see how it correlates with the drying process.” 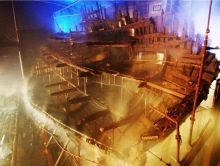 In another project with the University of Portsmouth, Eleanor’s team is using a neutron beam to map how the wood dries now it is impregnated with PEG.

“Although, the structure started out its life as wood, once you put PEG in it doesn’t have the same properties anymore: it’s a composite material. The neutrons allow us distinguish between the elements.”

Eleanor graduated from Imperial with an MEng in Materials Science and Engineering in 2002, going on to complete a PhD at the College, also in materials science. Yet, her interest in conservation came later, as a happy by-product of her materials expertise and particularly her skills in using synchrotron sources for advanced x-ray analysis of materials at the nanoscale.

“After working at the synchrotron facility in Stanford in the States, a postdoc position came up at the University of Kent, in partnership with the Mary Rose Trust. It was looking at how sulphur and iron are incorporated into the wood when it’s on the seabed, causing acids to form which degrade the wood. The only way you can see exactly what’s going on is with a synchrotron. So, it was an interesting new avenue for me and one where my skills could make a valuable contribution.” 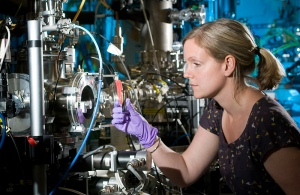 Eleanor went full time at the Mary Rose Trust in 2012 as Conservation Manager, moving up to lead the entire Department in 2016. The team celebrated a major milestone in April 2013 when a new state-of-the-art museum opened to house the ship and collection. After further renovations completed in July 2016, the museum offered the public unrestricted views of the hull from bow to stern, and the chance to effectively enter the upper deck through an air lock. With that access came unique challenges though. The museum has a suite of sensors and regulators that control temperature and humidity and alert the team, via text, day or night if something is awry.

“In some ways, it’s like a materials scientists’ dream being here, but in other ways it can be exceptionally overwhelming, we need to break it down into what is suffering and what needs the attention.”

Eleanor retains links with Imperial through an Honorary Lectureship, which sees her return to the College to speak to materials students. She has also worked on conservation research projects with her former supervisor and mentor Professor Mary Ryan, now Vice Dean for Research in the Faculty of Engineering.

“I basically spend a lot of time writing grants with universities to get PhDs and postdocs who will then work on specific problems related to the Mary Rose. We’re a charity and we get no state funding; we rely solely on tickets sales and donations. I have no budget for research at all. All of it is done by my going out and finding partners and finding money.

“It works really well having the students based at a university, with access to better facilities and kit than we do. When they visit us, they gain the context of what we’re trying to achieve and the importance of the collection.”

One of the projects Eleanor is now looking at is using carbonate nanoparticles to sequester and neutralise the sulphur and iron contaminants in the wood, incorporating these remedial particles into patches that stick on the wood, ‘almost like a poultice’. 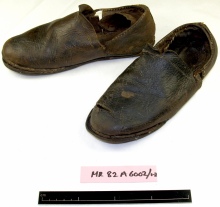 With the help of a community of volunteers, her department is also leading a project to digitise the vast collection of artefacts as well as archived film and slide imaging captured in the early days after the excavation.

“We’re so reliant on people volunteering; our museum wouldn’t run without volunteers. It’s all because of people’s passion for this. It’s special and it’s nice to be a part of that.”

The museum exhibition deftly explains the historical context in which the Mary Rose was born, before taking you into the main hall housing the ship itself, which is an eerie, inspiring moment. A display of technology and ingenuity from two different eras under one roof. It is one of those rare places where history is really brought to life, helped by little touches and attention to detail - for example, ghostly digital images of sailors, cooks and other crew going about their duties, are projected onto the structure itself, where they would have been working.

But for the staff working there now, does the magic ever wear off, through the mundanities and routine of maintenance?

“When I first started working here, I was on and around the ship a lot. There’s a lot of health and safety aspects, so you would be so focused on the task you’re doing and for your own safety you wouldn’t necessarily be taking it in as much. But then they’d be those ‘wow’ moments where you realise ‘I’m stood on the Mary Rose’. Which is insane. I still have those moments sometimes, walking around, when it’s quiet before the public get here.” 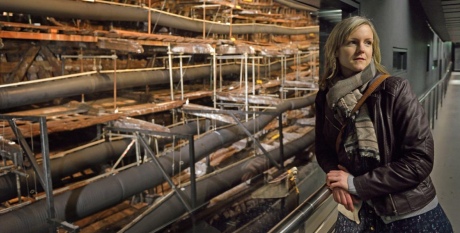 The Mary Rose has been referred to by historians as 'Britain's Pompeii' - preserved not by fire and ash, but water and silt.

For example, divers found a gimbals compass (pictured above), which rotates on two axes so it remains horizontal whatever the movement of the ship. It was thought to have been developed much later, in the 17th Century. Yet three were recovered from the Mary Rose.

Health is something of mixed picture. We know from records that diet was very good on board the ship, yet the bones of some of the crew show evidence of childhood vitamin deficiency, such as rickets, which tallies with severe famines in the early 1500s, possibly related to climate change.

The average height of the sailors was 5ft 7ins, not far from the modern UK average of around 5ft 9ins. In fact the average height of soldiers in the First World War was only 5ft 6in, which some experts have attributed to urbanisation and poor diet in the late 19th/early 20th Century.