Imperial Festival shares the wonder and reveals dates for 2018

Inspired crowds and widespread College pride are highlighted in a new report on Imperial Festival 2017 out today.

Feedback from attendees, exhibitors and volunteers on the College’s flagship public event are presented on the same day that the return of the Festival is announced for 27 – 29 April 2018.

Imperial Festival is the College’s largest annual showcase. For one long weekend its doors are thrown open as students, researchers and a range of other staff leave their labs, lecture theatres and libraries to discuss, engage, perform, create and debate with thousands of visitors.

The Festival’s sixth incarnation in May this year welcomed about 20,000 family members, school pupils, alumni, local residents and other members of the public onto campus to enjoy interactive stands, workshops, tours, talks and performances on everything from flying robots to the future of food.

Evaluation has been critical to the development and growth of the Festival. This year more than 500 Festival attendees, plus alumni, exhibiting staff and weekend volunteers gave their thoughts and suggestions to help provide a fuller picture of why they value the event, and how it could improve going forward. The summary report can be read on the Festival website.

This year almost half of attendees had no connection to Imperial at all (46%), and for around half of those the Festival represented their first ever visit to the College.  The Festival is growing in appeal to family audiences as around 50% of visitors were parents with children. 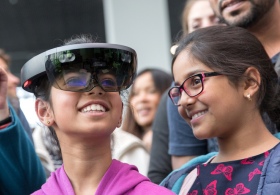 “Absolutely loved the atmosphere and all the staff and students were incredibly willing to talk about their passions which inspired future generations” said one visitor.

The evaluation also raised areas for improvement for next year’s Festival. Responders of all ages commented on overcrowding and the length of queues, while a number of parents asked for more guidance to find content suitable for younger attendees.

“Very proud to be part of Imperial”

Imperial Festival is only made possible because of the time, effort and enthusiasm shown by more than a thousand members of staff who dedicate their weekend to entertain, engage and educate the crowds. As a result the Festival team place great emphasis on listening to the views of contributing Imperial academics, students and staff members, and were pleased to see a similarly positive picture emerged from their interviews.

More than 92% of the academic presenters and exhibitors taking part in the Festival described it as a rewarding and motivating experience with a range of benefits. Nearly seventy-three per cent described it as enhancing transferable skills, while a similar number (73.8%) reported that it strengthened connections with Imperial colleagues. Nearly sixty-nine per cent stated that Imperial Festival raised the external profile of their work.

“I was really proud of Imperial, and of being part of Imperial, over the festival weekend – made me see what an open and exciting place it can be, filled with enthusiastic and brilliant scientists who are keen to share what they do with the wider community,” said one academic staff member.

“I wanted to give back”

For volunteers, 87.8% of respondents rated their overall experience as good or excellence. Almost all reported that participating in Imperial Festival 2017 had positive impacts on their feelings about Imperial College London, with increased pride and a greater sense of community being emphasised.

“I wanted to give back to Imperial and help make the festival successful this year,” said one undergraduate student who helped out during the weekend.

The next Imperial festival will take place on 27 – 29 April 2018. The call for proposals for Festival activities, demonstrations, talks, workshops, performances and any other ideas will open for researchers, students and staff in the autumn term.