The past, present and future of optics at Imperial has been highlighted to commemorate 100 years of College research and innovation in the field.

From the first fires lit by our ancestors thousands of years ago to the luminous glow of modern mobile phone screens, the power of artificial light has provided humankind with incredible opportunities to survive, discover and advance. The development of the optical field over the last two hundred years has pushed the potential of light-based technology to brilliant heights.

Last week the Photon Science Section celebrated 100 years of Optics at Imperial with a diverse programme of lectures, demonstrations and displays charting Imperial’s vibrant contribution to this dynamic area of research.

Opening the event, President Alice Gast said: “The Optics Section is an example of Imperial delivering on its original mandate. Imperial was established in 1907 ‘for the purpose of giving the highest specialised instruction, and providing the fullest equipment for the most advanced training and research in various branches of science, especially in its application to industry’.

“Today, Photonics and Quantum Optics and Laser Science fulfil Imperial’s mission of excellence in research and teaching for the benefit of society.”

Emeritus Professor Chris Dainty explored the origins of the Department of Technical Optics, established at Imperial in 1917 as the UK government’s response to a growing need for innovation in optical design and industry, highlighted during World War I. By 1919 Imperial was offering the first undergraduate and postgraduate courses in technical optics in the world; in 1931 the group was absorbed into the Department of Physics. 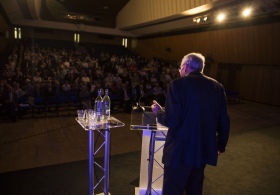 Imperial’s Optics Section has attracted scientists at the forefront of their field whose research has had, and continues to have, far-reaching, long-lasting impact. During the celebration, speakers examined the work of many notable figures from the group’s prestigious history.

His theories and work in mathematical analysis have become central to computer optics, image quality measuring, and the foundation of contemporary low-cost optical disc technology such as Blu-ray and DVD.

In his talk, Professor Roy Taylor delved into the world of lasers. Imperial’s first laser was constructed in 1962, but it wasn’t until the arrival of Professor Dan Bradley and his world-leading laser team in 1973, doubling the size of the Photonics Section, that this area of research really took off at the College.

The team pushed the field of laser and nonlinear optical technology, developing ever-more efficient and compact equipment, such as the femtosecond visible solid state laser. This heritage continues at the Rutherford Laboratory, where, in 1977, Professor Bradley was instrumental in establishing the Central Laser Facility.

Current research from the section continues to provide rich results with real-world impact. Professor Paul French delved into a series of fascinating research images showing how ultra-fast lasers are allowing us to see biological processes in humans and plants in unprecedented and extraordinary detail.

This helps specialists better understand, diagnose and treat disease through observation, via measurement and imaging; and intervention, via therapy and manipulation. Professor French demonstrated how useful this technique can be when imaging human tissues ‘in vivo’, from a living organism that’s constantly breathing and moving. 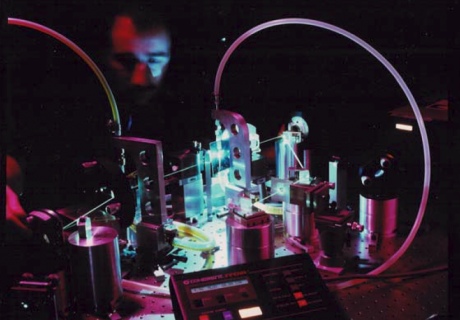 In his talk Professor Sir Peter Knight focused on fundamental optics and quantum science, presenting experimental and theoretical work into the interaction of high-intensity and ultra-short laser pulses with matter. Research in development at the National Physical Laboratory investigates quantum information processing, measuring jumps from single ions with a view to building the next optical clock.

Professor Knight presented a brief history of time-resolution, from shutters that function in milliseconds, to pulses operating in attoseconds, also mentioning breakthrough results in 2011 confirming that electrons are in fact round, and dipping into the area of classical and quantum cryptography.

Imperial alumnus Dr Chris Dorman, now Vice President of Coherent Scotland, presented a history of light, considering how and why the cost and efficiency of this industry continues to improve. For example, mobile phones rely heavily on the precision and power of laser processing for their internal components and sensitive touchscreens.

Exploring the huge economic impacts this advancement has on the economy, he also touched on what it takes to turn research in the lab into a market-viable product, and the journey from physicist to engineer to entrepreneur.

Alumnus, Professor Ian Walmsley (Oxford), discussed where the field goes from here. Probing areas such as cryptography, communication, computation and precision measurement, he provided examples of events on the horizon, including the launch of the James Webb Space telescope, a 6.5-metre primary adaptive, optical infrared instrument, which will broaden the Hubble Space Telescope mission in 2018.

A theme high on the agenda for the future of optics is the pressing need for increased diversity in the field, reiterated repeatedly during the event. 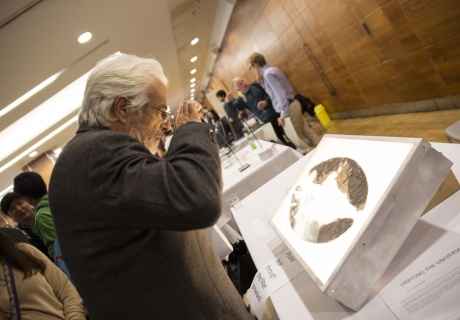 In recent years postgraduate study in Optics at Imperial has expanded with the development of two new Centres for Doctoral Training (CDT) in Controlled Quantum Dynamics and Quantum System Engineering Skills. Photonics MSc, MRes and PhD research also continues to flourish, looking to address emergent new themes, such as biophotonics.

It seems the 'golden era' of optics is set to get brighter for years to come.