Professor Gavin Screaton looks back on 14 years of world-class medical research and leadership at Imperial.

Gavin Screaton read medicine at the University of Cambridge, completing his clinical training in Oxford and London. Studying for D.Phil at Oxford University he developed a strong interest in research, establishing himself as a world leader in the field of molecular immunology. In 2004 he was appointed Chair of Medicine at Imperial’s Hammersmith Hospital Campus. He went on to serve as Vice-Dean (Academic Development) for the College’s Faculty of Medicine, before leading the Faculty as Dean in March 2015. From October, Gavin will take up the role of Head of the Division of Medical Sciences at the University of Oxford.

What was it about Imperial that attracted you and made you stay here?

The Medicine Chair was an exciting new opportunity for me and created some space for me to really develop, in terms of managing things and exploring new horizons.

I think it’s fair to say that Imperial College owes me very little and I owe Imperial a lot. I came here with the management skills to run a laboratory of ten people and Imperial has taught me the rest of it, and given me the opportunities to develop, to try new things and put ideas into practice. That’s one of the special things about Imperial, it is not frightened of good ideas, not frightened of change, and it gives people opportunities. Come up with a good idea and people will listen to you here. 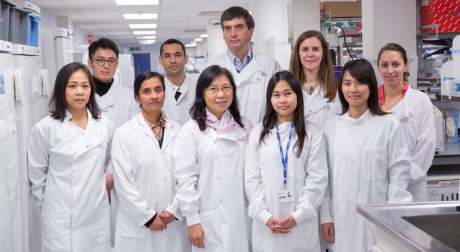 Professor Screaton and his research group

In addition to your leadership responsibilities, you’ve remained very active publishing research, with two papers out this month. You must still have that passion for your field of work?

That’s the one thing that’s not negotiable. I get a lot of enjoyment out of research and it keeps me ticking. It is something that I couldn’t really give up and I’ve been very lucky at Imperial to continue that. 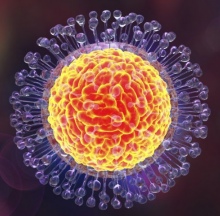 Of course, the leadership roles have constricted my research to a degree, and my interests are much less broad than when I was more dedicated to research, but we’ve focused more tightly on dengue and now Zika virus – and if anything that’s become more successful than it’s ever been.

The crucial thing is that I have a lot of help in running my lab. For example, I’ve done a considerable amount of work together with Dr Juthathip Mongkolsapaya, who came from Oxford with me and is now a Reader at Imperial. 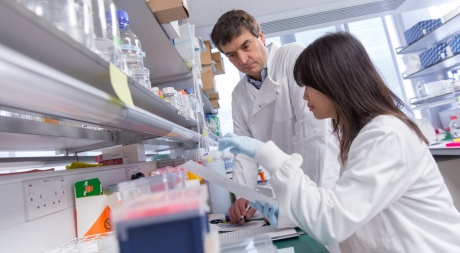 Do you think that scientists are getting more of a grip on these very clever viruses or will they always be one step ahead?

I think we’re catching up in terms of understanding them, the difficulty is that there will always be new ones wanting to make a jump from animals into humans and the evolutionary arms race is very much with us. If you put a pressure on a microorganism it will try desperately to run away, whether that pressure is a new vaccine, a new drug or an antimicrobial agent. So I don’t think this is going to go away, and in fact in terms of emerging infectious threats, be they bacterial or viral, it is recognised as an increasing problem. So as molecular virologists, I don’t think we’re going to be out of work any time soon.

How has the field changed?

Previously, something like virology was a very specialist area where you needed to train for an extensive period of time in that field. Now molecular biology techniques and the underpinning science has moved on to such an extent that one can actually span a number of different disciplines, such as immunology and virology as well as incorporating the clinical aspects. It’s the technology that has allowed one to span that spectrum, which in turn has enabled quicker progress.

What are you most proud of from a leadership and organisational capacity? 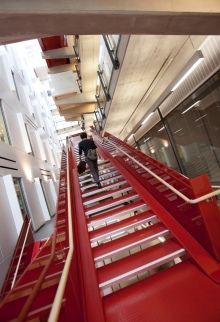 Certainly leading the redevelopment of the Hammersmith Campus, where we’ve probably spent the best part of £200m rebuilding and refreshing that campus and it’s now really special – although we’ve still a way to go to seeing that all the way through. I think setting up a partnership agreement with the Institute of Cancer Research (ICR), has been an important thing to be involved with.  Also, with colleagues setting up the Department of Medicine in 2010 and recruiting new blood into it I really enjoyed. One of the biggest legacies could well be in helping to drive the no smoking on Campus campaign at Imperial.

I’ve recruited a lot of people to the College, a number of whom have been very successful indeed. It would be invidious of me to start a list, as I’m bound to miss people off, but it’s been really fun to bring juniors here and see them setting themselves up, as well as more senior colleagues who are making a real success of Imperial.

What will you miss most about Imperial?

I’ll miss some terrific colleagues and relationships I’ve built over 14 years, I will miss the entrepreneurial spirit of the place, where change is encouraged rather than feared. I will miss the fact that if one makes a good rational argument for something, it will be listened to: that’s something very special to Imperial that it needs to keep.

A large number of colleagues have given me advice very generously through the years, and protected me from falling down open manholes.

With your successive leadership roles, do you feel you’ve gained a broad understanding of the current state of play in medicine? What do you make of talk of a coming digital revolution in healthcare and research?

I think there’s been a tremendous amount of funding in biomedical research over the past decade. But there’s an increasing realisation that we need to deliver this very high quality science for the public and patient good.

The NHS is awash with problems as well as opportunities, and data is a big one. How can we use that wealth of data to improve the patient journey? How can we use it to make progress in diagnosing and treating disease and designing new technologies which will ease the financial burden for the NHS, improve the outcome for the patients and help the country in terms of high end science and innovation? In the UK it’s something we really should be able to do perhaps better than anywhere else in the world because of the wealth of data in the NHS, but there are of course challenges with patient information which need to be resolved.

With the emergence of new immunotherapies and approaches such as gene editing is it a particularly exciting time for young doctors starting out?

I don’t think it’s any more exciting now than it has been; there have always been waves of technology, waves of new understanding. What impresses me is that it doesn’t stop – there are always brand new things that one has never thought about that come along and dramatically change the way science runs, the way we treat disease. They are frequently incremental, but there has been great progress during my career both in science and in clinical delivery to the patient.

I encourage all young doctors to look at this and in fact in my welcome address to students I remind them they are in this for the best part of 50 years and there will be good times and there will be bad times but there are real opportunities in research. The key to having a sustainable job for all those years is to make sure that tomorrow is slightly different than today.

Should young doctors be taking part in research from the outset where possible?

That’s very much part of our USP at Imperial, we have a research-led medical degree; we want people to understand the basis of disease, understand the nature of the evidence pointing to causality and treatment. That’s very important for us: we think it will make better doctors, but also more resilient doctors and resilience is a very important thing in a doctor.

You’ve been involved with aspects of White City – how has that project evolved?

It’s an extremely ambitious and very exciting project which is beginning to take some form. The northern part of the site is out of the ground and the masterplan for the rest of it is coming. I think the vision for a biomedical innovation space – which is collaborative, cross-disciplinary, and brings in industry whilst also hooking in all of the aspects we have already in the area at Hammersmith Hospital – is a very compelling one and I really hope it’s going to be realised.

With the Oxford position you’re returning to familiar terrain, but what are some of the challenges ahead?

Many of the issues in UK medicine today are generic to all top medical schools, be they issues of funding, student recruitment, of attracting and retaining the best researchers, so I think a lot of the things are the same. But I think the culture of the two organisations is very different. Having known Oxford a little bit from before and still knowing a lot of people there, I hope it will be a successful transition back.