Professor Dame Julia Higgins has spent her professional life at the intersection of physics, chemistry, engineering and materials science, and the catalogue of organisations that she has chaired or for which she has been president covers an even more diverse range of interests.

A polymer scientist who now holds the emeritus position of senior research investigator in the Department of Chemical Engineering, her previous roles have included president of the Institution of Chemical Engineers, president of what was then the British Association for the Advancement of Science and chair of the Advisory Committee on Mathematics Education, to name but a few.

“I like the leadership role and I think I am a very good chair,” she says frankly, but makes a distinction between that and “telling people what to do”, which is not her ambition. She was chair of the Engineering and Physical Sciences Research Council (EPSRC) in 2003–7 and foreign secretary and vice-president of the Royal Society – roles that fall firmly in the leadership category. She emphasises that any decisions in which is involved at the IOP will be made in conjunction with senior staff and officers and with all the Institute’s Council, for whom she is full of admiration, she says.

She is grateful that the IOP enables presidents to become familiar with the role by spending two years as president-elect but does not restrict eligibility to those who have previously served on Council. “If you stipulated that, it would rule out a lot of people who haven’t had the time to work up to it. The role requires someone who, if not retired, can at least control their own diary.”

Though herself retired, she is still very much a part of Imperial College and wants to be considered part of the research community, she says. While she does not run laboratories or grants, she is working with colleagues and active in research, currently in the field of spinodal decomposition of blends of polymeric materials. She and her colleagues are revisiting the Cahn–Hilliard model of spinodal decomposition that was developed in the 1970s and 1980s but has seemed not to entirely match experimental observations. “We’re just coming to the end of the review process and are about to submit a paper. I don’t have students working on it but it’s been great fun.”

She first became interested in polymers after doing a PhD at the University of Oxford, centred on neutron scattering. Having been an undergraduate at Somerville College, Oxford studying physics, she was recruited by John White in Oxford’s chemistry department for the PhD, despite at that time having done no chemistry since O-level.

Later, she went on to apply neutron scattering techniques to the study of polymers, initially as a postdoc at the University of Manchester. Her four-year research fellowship there was followed by a one-year research fellowship at the Institut Charles Sadron in Strasbourg, France then a three-year period as a physicist at the Institut Laue-Langevin in Grenoble, France. The experience has helped shape her personal views on Brexit.

“I think the UK should be part of Europe and Europe needs the UK. I did a postdoc just as we were joining the EU. I was offered the post before this had actually happened [on 1 January 1973] and I was told that I’d need a work permit and that it would be difficult to get it, but when I turned up with the documents on around 3 January I was told ‘oh you don’t need that now’".

“Scientists will find a way to work together, they always have, it was just that everything was facilitated by the EU. I’m very supportive of the work that the IOP is doing around this and I just hope that we can have an impact and that a sensible compromise will be found.”

Before becoming a postdoc and while writing up her PhD while starting married life, she spent two years as a physics teacher at Mexborough Grammar School in Yorkshire, which she found challenging in terms of classroom management, particularly as she had had no teacher training. The experience, however, has given her an invaluable insight into education in schools. She’s now a governor at the Godolphin and Latymer School in west London, an independent girls’ school with a record of high achievement in science subjects, but she’s deeply conscious that this is not the norm for mixed secondary schools in the state sector and of the statistic that half of these do not see any girls progress to physics A-level.

One of her hopes for her time in office is to see further progress in the Institute’s work on physics education, and particularly in increasing the proportion of girls participating in physics. “I think the IOP’s latest reports, which have been looking at whole-school culture and at boys’ subject choices as well as girls’, have put their finger on the right thing. I’m sure that there’s more that can be done in supporting teachers and allowing them time for subject-based CPD, although I’m very supportive of the work that the IOP is doing already.

“I think one of the great things about the Institute is that it’s managed to welcome teachers as full members of the IOP and that their needs were really considered in the recent changes to the membership structure. Overall there was a huge effort to explain the new structure to the membership. The change was absolutely essential and we have to make it work.” 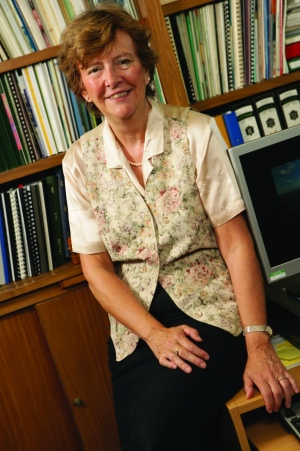 The major priority in the coming months is to make a success of the Institute’s move to its new building in King’s Cross next summer, she says. “Internally I think it’s going to make it much easier to work together – currently staff are separated in cramped offices and don’t see each other. It will be a lot easier and pleasanter and it will enable us to do a lot more outreach-type activities in the new building – it will give us a physical profile in the world with those large windows facing onto Caledonian Road.”

Most of her own working life has been spent at Imperial College, where she became a lecturer in the Department of Chemical Engineering after her return from France in 1976. She went on to be a Reader there from 1985–9 and then became Professor of Polymer Science until her retirement in 2007. In 2006–7 she was principal of the Faculty of Engineering, and in 2002–6 she also held a part-time post as director of Imperial’s Graduate School in Engineering and Physical Sciences.

Over the years people tried to tempt her to take up posts in the US, but she resisted. “People said ‘you are free, you could easily go’, but I thought ‘you have got a family whereas I would have to go on my own and leave all my roots in Europe’.”

During her career she has championed the cause of women in physics, being chair in 1998–2003 of the Athena Project, which aims to advance women in science, engineering and technology, a former trustee of the Daphne Jackson Trust and a patron of Women in Science and Engineering (WISE). In 2010 she was named as one of six Women of Outstanding Achievement in Science, Engineering and Technology by the then UK Resource Centre for Women in Science, and a photographic portrait of her that is part of the award was hung in the IOP’s London office.

She did not consciously encounter sexism in her work, she says, but was one of only 10 women among 200 undergraduates studying physics when she first started at Oxford. This was somewhat mitigated by the fact that most of these were students from Somerville, and formed a small group within this then all-female college.

She had also been in an all-female environment at school. “A really good physics teacher joined the school and I was immediately fascinated with physics,” she says. It had been assumed that she would be a mathematician but she realised that with A-level she was reaching the limit of her ability in maths and by that time physics was more attractive.

Having been somewhat unaffected by sexism, therefore, it was not until she was in leadership positions that she realised she was in a unique position to take action to support diversity in science.

In recent years she has been closely involved with the work of the Royal Society in developing science education. She believes there is a false dichotomy between science and the arts. “An education system that taught people in a holistic way would be better for all of us. It’s better not to specialise too early – you miss out on such a lot."

“What I find really exciting about physics is that you can be curious – you are always asking ‘why’ or ‘how’. The sort of physics I do – materials physics – is not glamorous to a lot of people, but it is just as satisfying. There’s a huge amount going on at the frontline of biology and materials and physics is sitting right in the middle of that.”

As a former chair of the EPSRC she believes that “it doesn’t do a bad job, given what it’s there to do and that it has to balance lots of different demands”. She adds: “On the whole I think science has not been badly treated in this country, but I don’t think academia has been looking after the research assistant community well enough. The career path for people who take grants to be research assistants is very hard and it’s a very difficult transition from the two to three years after a PhD to finding a permanent job. It’s a fact that we use them – they’re the engine that keeps research going."

“When I was a postdoc I think there was much less pressure put on young people in research than there is now, though that may be true more generally, not just in science and in universities.”

Over the years since then she has received numerous awards and honours. She was the first woman to be made an honorary fellow of both the Institute of Physics and the Royal Academy of Engineering. She was elected a Fellow of the Royal Society in 1989, was made a Dame in the 2001 Queen’s Birthday Honours and was awarded France’s Chevalier de la Légion d’honneur in 2003.

She received the Fernand Holweck Award of the Institute and the French Physical Society in 2006 and her involvement with the IOP has included being a member of the Polymer Physics Group, the Neutron Scattering Group and the Honorary Fellows Committee. However, it hadn’t crossed her mind to put herself forward for election to be president until she was approached to consider standing and was elected unopposed.

“I consider myself a physicist and therefore it’s a rather nice honour,” she says.

This press release originally appeared on the IOP website on 26 September 2017, and was written by Heather Pinnell (News Editor, IOP). Its content has been adapted and republished here with permission.