Young people from schools across London are working on innovative products that would improve lives for city dwellers.

The Schools Challenge, a collaboration between Imperial and J.P. Morgan, challenges year 9 pupils to develop solutions to one of three key urban challenges – transport, reusing resources, and air quality. 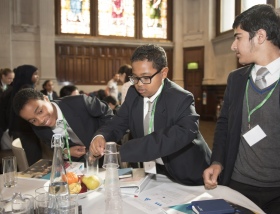 Nearly 150 students from nine schools in the capital are taking part, designing and building a prototype product using facilities at the Reach Out Makerspace at Imperial’s Invention Rooms, as well as developing a promotional campaign and business plan to support their idea.

The 18 teams will work with Imperial students and J.P. Morgan business mentors, who will help them develop their idea before pitching their prototypes at the grand final in December.

The programme aims to boost engagement with science, technology, engineering and maths (STEM) among underrepresented groups and support them to make informed choices about their next steps in education and employment.

You are the future

During an event held at J.P. Morgan last week, Imperial physicist Dr Simon Foster gave an introduction to the teams, explaining how London’s growing and aging population is placing pressure on the capital’s infrastructure. 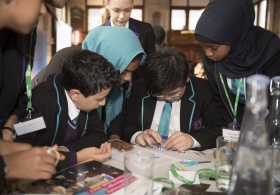 He highlighted just one example of this, the London seweage system Built during the Victorian era in response to the Great Stink of 1858, London’s sewerage system revolutionised the city’s waste-management and brought profound public health benefits to a population previously plagued by water-borne diseases such as cholera.

However now trouble is brewing again, he said, because the Victorian sewers are unable to cope with London’s ever growing population and proliferating high-rise developments. Modern life is also contributing, with sewers becoming blocked by ‘fatbergs’ – congealed clogs of fat and unflushable items. 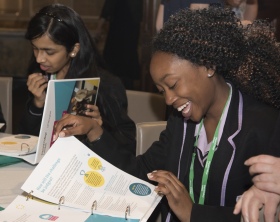 More solutions are needed, he said: “You are going to be the medics, scientists and engineers that will fix these problems in the future”.

Jenzen Fernan, a year 9 pupil from Burlington Danes Acadamy in West London, said: “I’m excited for the start of the programme. We’re going to be making things that could one day change the world, which makes me feel very proud.

This is very different from anything I’ve done before, but I’m looking forward to learning to both make a product and develop my business skills. I can’t wait to see what we all come up with.”