Scientists have identified a key gene in blood vessels which could provide a new way to assess and potentially treat liver disease.

The findings come from a study, published in the journal Nature Communications, which highlights how a single gene, called ERG, plays a key role in keeping the liver healthy.

According to the group, led by researchers at Imperial College London and the University of Birmingham, the work on mice and human cells highlights how this ‘master gene’ is fundamental to maintaining the health of blood vessels and the specialised cells which line their inside, called the endothelium.

The findings identify an underlying mechanism of how disease progresses, which could have implications for patients with damaged livers and potentially those with heart disease, and could open new avenues for targeted treatment. 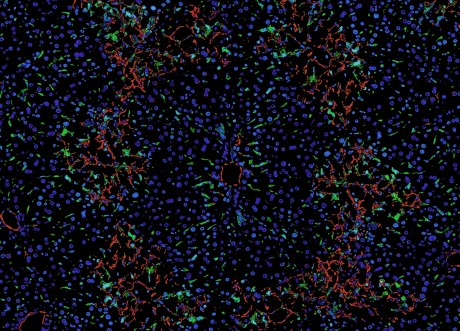 Fibrosis in the liver: Fibrosis starts around vascular structures (green) then smooth muscle cells (red) start to spread through the liver

Liver disease is the fifth biggest cause of death in the UK, with a 20 per cent increase in cases over the last decade. It kills more than 16,000 people a year, with over a quarter of these related to alcohol. However many patients do not present symptoms until they have irreparable liver failure, which leaves transplantation as the only possible option.

This highlights the need to find more biomarkers – molecules or other markers which can be picked up on by clinical tests – to detect early disease and has led researchers to focus on the small blood vessels supplying the organ with blood and nutrients.

Lining these blood vessels is the endothelium, a layer of specialised cells which plays important roles in the inflammatory response against infections, enabling white blood cells to pass in and out of the blood stream, as well as signalling to direct clots where to form after injury.

The master regulator of endothelial cells, ERG, is not only essential to maintain the health of blood vessels, but also of the tissue around blood vessel

Scientists have previously shown that the gene ERG helps undifferentiated precursor cells to mature into the endothelium, as well as playing an ongoing role in keeping the endothelial cells healthy.

In the latest study, researchers found that loss of function of this ERG master gene in endothelial cells caused damage and fibrosis in the livers of mice.

When mice were genetically modified to inhibit the expression of ERG, endothelial cells lost their unique properties and became dysfunctional, reverting to an earlier, undifferentiated state – a process known as EndoMT (endothelial-mesenchymal transition). EndoMT is associated with tissue inflammation and the build-up of fibrotic tissue, a signature of liver disease.

A similar process was seen in animals given a chemical compound to inhibit the function of their livers. In these animals, the researchers found a drop in levels of the ERG protein (encoded by the gene) in liver tissue and a loss of ERG function in endothelial cells was linked with liver injury. However, they found that giving the animals an anti-inflammatory drug prescribed for chronic rheumatoid arthritis was able to prevent the drop off in ERG, and protected the animals’ livers from damage.

The findings in mice were backed up by observations in human tissue, using biopsies from patients with liver disease, including alcohol-related cirrhosis. Analysis revealed the same loss of ERG in endothelial cells as seen in the mouse models, confirming the protective effect of the ERG gene in endothelial cells.

Professor Anna Randi, Head of Vascular Science at Imperial’s National Heart and Lung Institute, and leader of the research, said: “We have found that the master regulator of endothelial cells, ERG, is not only essential to maintain the health of blood vessels, but also of the tissue around blood vessel, in this case the liver; its loss pre-disposes tissue to becoming fibrotic and dysfunctional.” 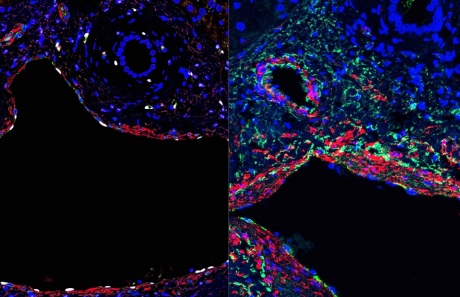 She added: “The study shows how acute and chronic inflammation can dramatically affect the activity of this master gene which is essential for endothelial cells function, with profound consequences not only for the vasculature but also for the surrounding tissue function, which leads to liver damage. This is an exciting finding, as it opens a new way to prevent or treat liver disease by targeting the endothelium.”

According to the group, this research shows that ERG could potentially be used as a biomarker to monitor the health of blood vessels and tissue. By measuring levels of the ERG protein it could act as an early warning sign that tissue health is declining – with a drop in ERG linked with the feedback loop and a slide towards scar tissue. Likewise, it could also be used to confirm if a treatment is working, with levels of ERG restored.

This is an exciting finding, as it opens a new way to prevent or treat liver disease by targeting the endothelium

In addition, the research may extend beyond liver disease. Chronic fibrosis occurs in many other diseases such as atherosclerosis, heart and lung disease and the researchers believe that their study identifies a fundamental mechanism which could have implications for patients suffering from other diseases.

Professor Randi added: “We are working to understand the ERG pathway and how it can be targeted in the liver, but we also want to know if the same mechanism occurs in other tissues, such as the heart. Fibrosis is a serious consequence of many diseases, including myocardial infarction (heart attacks) and can lead to the severely debilitating condition of heart failure.

“We plan to study whether patients with heart disease and fibrosis also have a loss of ERG in their blood vessels, and how we might possibly exploit this pathway for the treatment of these patients.”

This research was funded by the British Heart Foundation.

Images: Neil Dufton. Images taken at the Facility for Imaging by Light Microscopy.