One of China's top universities strengthened its partnership with Imperial, while President Alice Gast received an honorary professorship this week.

Tsinghua University and Imperial signed a strategic partnership this Tuesday, pledging to explore further exchanges and interactions between students, staff, entrepreneurs and senior leadership from the two world-class universities. 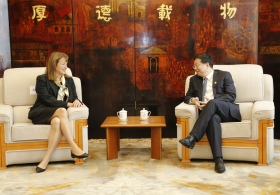 Imperial and Tsinghua already have a high volume of research collaboration, publishing more than 400 joint papers within the last five years. Beyond academic-to-academic partnerships, students from both universities take part in education and research exchanges.

President Gast, a distinguished chemical engineer, became an honorary professor of Tsinghua’s renowned Chemical Engineering Department. Alumni of the Department include President Xi Jinping, who visited Imperial as a part of his UK state visit two years ago. 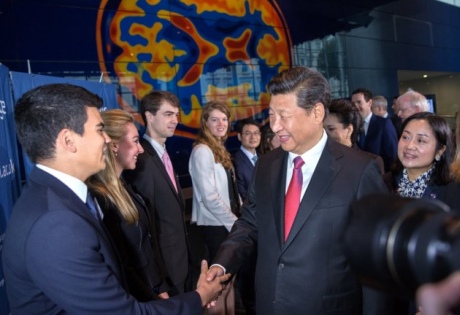 After receiving the honour from the President of Tsinghua University Professor Qiu Yong, Professor Gast delivered a special lecture on "great universities in times of change", highlighting the importance of collaboration, excellence, patience and sharing.

The lecture was part of Tsinghua’s Global Visions series, hosted by Professor Zhao Jinsong, Chair of the Department of Chemical Engineering at the University.

Professor Gast told the audience of Tsinghua students and academics as well as many Imperial alumni that: “Tsinghua University and Imperial College London have a long history of collaboration. It began over twenty years ago and has grown stronger and more vibrant over the years. Today our two great universities are working together on research on biomedical imaging, nanotribology, microsatellites, computing, energy and a host of other areas.” 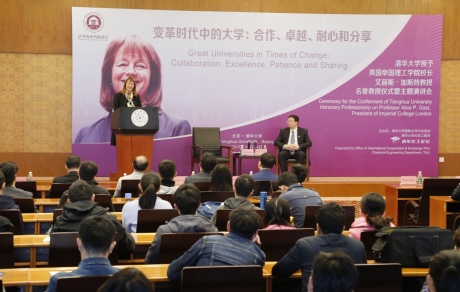 “In addition to research, we have established education links between our undergraduate and graduate students,” she added. “This past summer, 13 Imperial undergraduates participated in the learning and cultural programme hosted by Tsinghua. They described the experience with expressions like: ‘eye-opening and enriching’, ‘a great adventure’ and say things like: ‘I believe I am now a more international person’. This is what it is all about; using educational exchanges to allow students to open their eyes to other parts of the world, to become more international.

“Next summer doctoral candidates from Imperial will participate in the Imperial-Tsinghua Global Fellows Programme on Global Climate Change and Energy. And other Imperial and Tsinghua students will work together once again and develop lasting friendships through our Global Fellows Programme, Tsinghua’s Environment Summer School, International Summer Research Placement Exchange Scheme and other outstanding exchange programmes.” 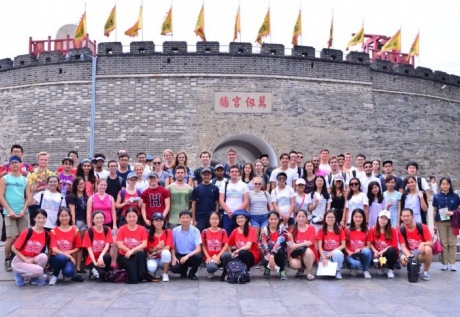 Imperial students visit Qufu on a summer exchange with Tsinghua

Reflecting on the wider significance of UK-China academic collaborations, Professor Gast said: “Tsinghua and Imperial play an increasingly important role in today’s world. Like other research universities, we educate tomorrow’s leaders, provide solutions to pressing problems, and look beyond the immediate to advance the frontiers of knowledge.

“Society’s demands on universities have never been greater. Our ability, as great universities, to rise to the challenges and opportunities we face requires an openness to collaboration, a commitment to excellence, patience when facing complexity, and, a desire to share our world of innovation and discovery.”

Professor Gast delivered the lecture ahead of a visit to Tsinghua's X-Lab, where she and Associate Provost (Academic Partnerships) Professor Maggie Dallman met a group of young female entrepreneurs.

"These challenges need innovation at all levels, which is why the growth in student entrepreneurship at both universities is so exciting.

"Imperial, like Tsinghua, is working to remove barriers to and build support for women in entrepreneurship. We need bright, creative innovators, like those we met in the X-Lab, to find solutions and create the next generation of business and societal opportunities."

Professor Gast said: “Governments rightly look to universities for the research that will bring innovation and translate discovery into commercial enterprise. But we must take care to protect and support those ideas having great societal, but little short term economic impact."

We need to provide long-term "patient capital," and to "invest in ideas that take longer to develop," she argued. "Tsinghua Holdings is doing that with its incubators and accelerators." 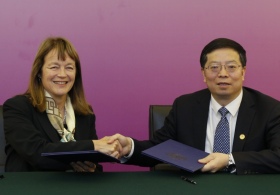 Professor Gast added: “In addition to trying to create small start-up companies, it is important for universities and corporations to work together to turn ideas into commercial applications.

“At Imperial, we are doing our part to promote innovation amongst our students through a host of programmes. We have our new Enterprise Lab, the WE Innovate programme, our Venture Catalyst Challenge and our Incubator at the I-Hub at our new campus in the White City area of London. We are building these and more. We are looking for partners with patience and foresight, partners to help us be even more innovative.”

After Professor Gast’s lecture, a lively Q&A session led to discussions on the challenges of cultivating interest in science and engineering among those with fewer traditional ties to the fields, as Imperial is doing at White City’s Invention Rooms and the College’s Reach Out Lab.

She responded to a student’s question on the “culture shock” of overseas study, by emphasising the importance of cultural exchange and the new ideas and perspectives that can drive creativity and academic discovery.

Professor Gast said: “We are fortunate to live in exciting times. We are also fortunate to be a part of great universities whose work adds to the dynamics and excitement of meeting today’s challenges.

“We at Imperial look forward to continuing our long and productive friendship with Tsinghua.”