Colombia is moving forward with an ambitious environmental framework, said the Minister for Environment & Sustainable Development at Imperial.

In 2016, the Colombian government signed a landmark peace deal with the country’s largest rebel group, the Revolutionary Armed Forces of Colombia (Farc), putting an end to 53 years of conflict.

Earlier this week, Minister Murillo visited Imperial’s Grantham Institute to explain how, following a turbulent period of reconciliation, the peace process has paved the way for a new era in climate change and environmental policy. “Now, we are able to focus on building a country that is peaceful, inclusive, and full of hope, not only for Colombians, but for the world,” he said.

The dividends of peace

Our Climate Change policy reflects our vision for 2030, and one that we share with global community – to have a carbon-neutral economy by 2050

Minister of Environment and Sustainable Development

Minister Murillo described Colombia as “a country of invaluable natural wealth, where the cultural diversity of people reflects the richness of the land”. Colombia is listed as one of 17 “megadiverse” countries. Over 53% of its territory is covered by natural forest, it is home to 311 types of coastal and continental ecosystems, and it is one of the world’s richest countries in terms of biodiversity - ranking second behind Brazil.

“One of the dividends of the peace agreement is that we can protect Colombia’s rich natural world,” said Minister Murillo. “Colombia is home to 60% of the world’s páramos, high-altitude wetlands that contain many rare, endangered species, provide a vital source of clean water to millions of people and act as carbon sinks. Before, we had military brigades fighting in areas like these, so we couldn’t protect the ecosystems there. Now, we are able to create conservation areas - brigades that were fighting in the páramos are now working with former Farc members to protect the wildlife there.”

“Similarly, researchers from Colombia and the UK have been able to access areas they couldn’t dream of going to before. As a result, over the past two years, we have discovered 88 new species - and we may yet discover more.” 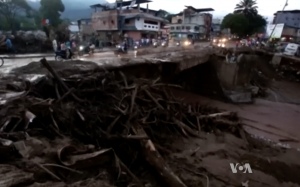 Due to its large coastal, marine and mountain ecosystems, Colombia is particularly vulnerable to extreme weather events and climate change. Earlier this year, heavy rains in the Putumayo province led to a deadly landslide that engulfed the city of Macoa and killed over 300 people. Similarly, La Niña in 2010 and 2011 hit the country very hard, leading to severe flooding, landslides and widespread destruction.

“Colombians understand that climate change is a serious issue – they are already feeling its impact,” said Minister Murillo. “All political parties support the climate change agenda, which protects it from the political cycle. We are defining long-term policies that take us right up until 2030, and have the support of the international community and the private sector to guarantee its continuity.” 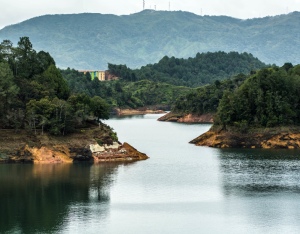 Over 53% of Colombian territory is covered by natural forest.

Colombia is now implementing a comprehensive environmental framework that consists of five priorities: adaptation to climate change, designation of protected areas, conservation of water resources, restoration of degraded land and the introduction of more sustainable production and consumption.

Like many other developing countries, Colombia faces many environmental challenges as it grows. “One of the biggest problems we have is deforestation,” said Minister Murillo. “Since the peace agreement, dissidents have created criminal networks that promote deforestation – something we need to stop quickly. 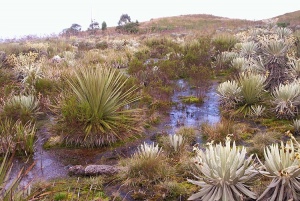 Colombia is home to 60% of the world’s páramos

“Another challenge is funding. On average, we need 1 billion dollars per year to implement the policy until 2030. To secure this investment, we must raise awareness to help mobilise more private funding. “

On his visit to Imperial, Minister Murillo and His Excellency Néstor Osorio Londoño, Ambassador of Colombia to Great Britain & NI, met with Professor Joanna Haigh, co-director of the Grantham Institute, and senior Imperial academics from Energy Futures Lab and Imperial College Business School to discuss ways in which Imperial and Colombia might collaborate further to build deeper partnerships in future.

To stay up to date with the latest news and events at the Grantham Institute, sign up to our weekly newsletter.