A new study suggests a drug that was used in the past to treat gonorrhoea could help tackle infections that are resistant to current treatments.

Cases of the sexually transmitted infection gonorrhoea have been rising in recent years and the bacteria that cause it are becoming increasingly resistant to the antibiotics currently used, in some cases making it impossible to treat.

But the new study, which is based on modelling of surveillance data, suggests that continuing to treat most patients with the current two-drug treatment while at the same time treating a small proportion of patients with an older but still effective drug could help prevent a rise in untreatable infections.

The researchers behind the study say that this unconventional approach of using different treatments for some patients could also prove useful against other types of drug-resistant infection, such as E. coli, MRSA and tuberculosis.

The research was led by Dr Xavier Didelot, a Senior Lecturer at Imperial’s School of Public Health. He explains: “In the 1970s we were successfully treating gonorrhoea with penicillin, and when that began to fail, we started using other drugs which failed one after the other.

Instead of using drugs until they fail, can we use them in such a way that resistance will not arise?

“In 2010 we switched to the current treatment, a dual therapy of ceftriaxone and azithromycin. This treatment works in most cases but it’s risky because we are using our two remaining options together and already there have been cases of resistant gonorrhoea, which is untreatable.

“We are not expecting any new antibiotics to come onto the market in the near future so we wanted to look at whether there’s another way. Instead of using drugs until they fail, can we use them in such a way that resistance will not arise?”

To answer the question, Dr Didelot and his team studied surveillance data on resistance to a previously abandoned drug called cefixime. They used the data to understand how cefixime-resistant bacteria were spread among homosexual men between 2008 and 2015, becoming more common the longer the drug was in use, and less common after the drug was abandoned.

This enabled the researchers to see how bacteria adapted to new antibiotics and how they increased or decreased their resistance to different antibiotics depending on how often they were used.

Dr Didelot explains: “Being able to resist drug treatment brings obvious benefits to bacteria because it means they can survive and go on to infect other people.

"But it’s not completely without disadvantages either, for example the bacteria might have to produce special drug-inactivating proteins, and this uses resources which could otherwise be used to grow and spread. 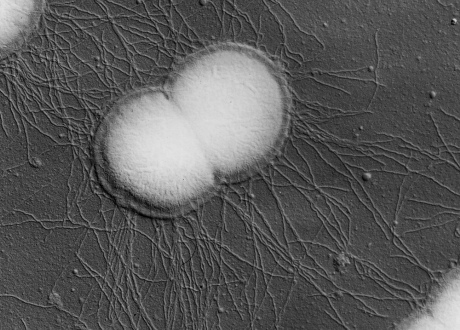 “Because of this, and because we switched to using a different treatment for gonorrhoea, resistance to cefixime has decreased. The bacteria don’t need this ability anymore so they’re losing it.”

Being able to quantify the pros and cons of resistance meant that the researchers could go on to model what would happen if we began using cefixime again.

Their model shows that we could safely begin using the drug again to treat one in every four cases of gonorrhoea. The other three out of four patients would receive the current ceftriaxone and azithromycin dual therapy.

If the model is correct, this pattern of prescribing would ensure that resistance to cefixime would not reoccur and it could also help stem the rise in infections that are resistant to the dual therapy.

Dr Didelot says: “Cefixime is a previously used drug so we already know it is safe. Now we also know that it can be effective again if not overused.

“More broadly there is a major issue with various types of infection developing resistance to antimicrobials. This study suggests that there are options we can try while we wait for new drugs to be developed. We need to make sure we gather data on drug-resistant infections.

"We also need to do more predictive studies like this one to guide our prescribing decisions and preserve the effectiveness of the drugs we have now.”

'Estimating the fitness cost and benefit of cefixime resistance in Neisseria gonorrhoeae to inform prescription policy modelling study' by Whittles, L et al. is published in the journal PLoS Medicine.