Diplomats and scientists debate the future of smart cities at Imperial The inaugural Imperial Global Science Policy Forum (IGSPF), which coincided with the United Nations’ World Cities Day, showcased some of Imperial’s most innovative ideas on the themes of urbanisation, global development, and big data.

London’s newly appointed Chief Digital Officer Theo Blackwell also addressed the audience of representatives from more than 30 countries, outlining his and the Mayor’s vision for London as a smart city. 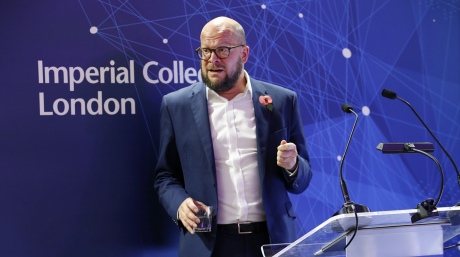 The networking event at Imperial last night brought together diplomats from some of Imperial’s top collaborating countries including the USA, Singapore, France, UAE and Israel, and industry experts to find out more about the College’s world-leading research.

Professor Jennifer Whyte, from the Faculty of Engineering, outlined her work developing next-generation tools for engineers and managers to better integrate civil infrastructure projects. She explained the importance of ‘screen real estate’ when analysing data and highlighted how Imperial’s ‘walk-in screen’ at the Data Science Institute is benefitting research.

Professor Whyte said: “Infrastructure complexity is growing and the speed of change is really challenging us.”

Dr Yves-Alexandre de Montjoye, from the Data Science Institute, is researching how the unicity, or uniqueness, of human behavior can impact the privacy of individuals when using large datasets. He explained how large datasets, such as mobile phone GPS data, may not be as anonymous as we thought.

Dr de Montjoye said: “With just four locations from mobile data you can identify an individual from a database of over a million people 95% of the time.”

The research could also help tackle issues such as social inequality. He said: “I am convinced of the amazing potential of this data for good, allowing us to better understand human behaviour and societies at scale.”

A group of former PhD students, including Max Grell, presented their plans to develop a mobile phone sticker which can measure toxic air pollution. The paper air sensor could help gather vital data on air quality. The spin-out group, Blakbear, said the paper has a pollution-sensitive sensor inside and is stuck on the back of a smartphone, which powers it. The data can then be sent to an app in the phone which matches it to its location to find out the pollution hot spots. It could potentially have other applications too such as measuring water or food contamination.

The Blakbear team explained how their success in Imperial’s Venture Catalyst Challenge for student entrepreneurs – and the subsequent media coverage – gave their business an essential kickstart.

London as a smart city

Professor Gann had just concluded a five-year term as Chair of the Smart London Board, working for the former Mayor Boris Johnson as well as the current Mayor Sadiq Khan to realise London’s potential as the world’s leading smart city with first-rate digital infrastructure. 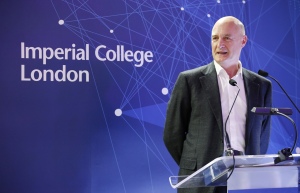 Under Professor Gann’s leadership, initiatives including the London Datastore gave the public access to previously unavailable data on issues including health, crime figures, employment statistics and carbon emissions indicators. Since it was launched, Datastore has led to the creation of hundreds of apps, including Citymapper.

The keynote speaker, Theo Blackwell, the Mayor of London’s Chief Digital Officer, paid tribute to Professsor Gann’s “leadership” and “legacy” on the Smart London Board, which is “making life in London better.”

Mr Blackwell announced a new smart London plan to be launched next year.

He said London is "bubbling with innovation" and wanted to focus on three key areas: to promote digital leadership across London to ensure consistent messaging around smart technology and data, to build digital foundations to encourage people to work together and collaborate, and to ensure the needs of London’s digital economy is understood.

Other Imperial research exhibited at the event included a project, led by Dr Ana Mijic, which explores how people use and manage water.

Further Imperial Global Science Policy Forum events are scheduled for next year including a tour of Imperial’s White City Campus and a breakfast briefing on Global Health Innovations.