Origins of fluctuations in soft matter described for the first time Classical fluids can be categorised into two classes: simple fluids where the particles are atoms or molecules, and colloidal fluids where particles are suspended in a fluid bath made up of much smaller particles. Such colloidal fluids are ubiquitous in every-day life, natural phenomena and technological applications. Examples of colloids are milk, shampoo, cosmetics, paints and liquid crystals but also sand and clouds. It is precisely the difference in particle size and weights which makes the dynamics of colloidal fluids unique. This poses big challenges for their theoretical and computational modelling.

This paper opens the door to the discovery of new physical laws governing the dynamics of soft-matter systems out of equilibrium.

Over the last few decades, theoretical work regarding colloidal fluids has mainly focused on approximating their dynamics using a Newtonian description for both the bath and the suspended particles. Nevertheless, following every particle of the system makes the problem computationally intractable. To try and overcome this issue, a great deal of theoretical work has been devoted to approximating the full description by carefully eliminating the less relevant information associated with the bath particles. The simplified equations resulting from that elimination (known as the stochastic Langevin equations) have been generalised for colloidal fluids and have been used extensively.

However, the Langevin picture is still too detailed, since it describes the dynamics of every single colloidal particle. Hence, it is almost impossible to make analytical predictions or to study the global properties of the system. The missing step requires to connect the stochastic dynamics of the constituent particles with the macroscopic hydrodynamic quantities determining the macrostate of the system which can be measured in the lab. These quantities are, for example, the density and the local velocity (or, equivalently, momentum).

In 2012, researchers from the Complex Multiscale Systems Group at the Department of Chemical Engineering, Imperial College London, made a crucial step towards connecting the microscale with the average evolution of the density and local momentum mentioned before, resulting in the so-called dynamical density functional theory (DDFT). The DDFT framework was shown to successfully model a variety of scenarios, from systems of hard spheres to complex mixtures. But DDFT is not capable of describing fluctuations, given that the random forces are removed through the derivation.

For many years, the only way of taking into account fluctuations within the macroscopic description of a fluid was by artificially adding random forces to the standard equations of hydrodynamics (namely, the Navier-Stokes equations). This was stipulated for the first time by Landau and co-workers in the late 1950s within the context of fluid in thermodynamic equilibrium, giving rise to the so-called fluctuating hydrodynamics (FH). Since then, attempts to rigorously derive FH and extend it to non-equilibrium scenarios have historically been incomplete. This has kept alive the debate on how to include fluctuations in the equations of hydrodynamics (in and out of thermodynamic equilibrium). Indeed the problem of including fluctuations self-consistently in a macroscopic description has been elusive for some time.

Researchers at the Department of Chemical Engineering at Imperial College London (Miguel A. Durán-Olivencia, Peter Yatsyshin and Serafim Kalliadasis) in collaboration with a former researcher in the group, Benjamin D. Goddard (currently at the School of Mathematics of the University of Edinburgh), have obtained a thorough derivation of a new fluctuating DDFT framework which successfully describes colloidal systems with fluctuations in a self-consistent way. In their work, they also show that the fluctuating DDFT formalism corresponds to a particular version of the FH, and is capable of describing soft-matter systems, both in and out of equilibrium. The derivation, titled General framework for fluctuating dynamic density functional theory was published in the December issue of the New Journal of Physics, where a video abstract highlighting the importance of this work is also available. 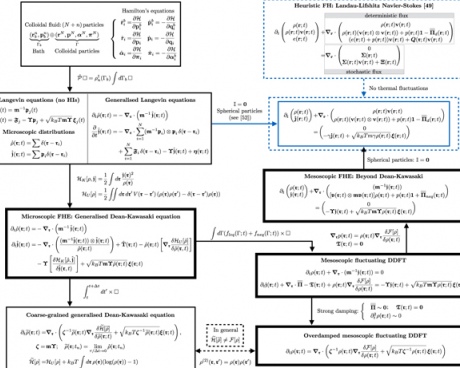 Flowchart showing the approaches used in the paper

This new framework is rather flexible as it accounts for various levels of complexity and degrees of freedom. For instance, it is applicable to fluids systems with arbitrary-shaped particles, such as rough spheres or nematic solutions. These play a key role in the study of biological processes, such as protein adsorption and trapping or biochemical assembly by polymerisation. This new formalism provides the theoretical route to study fluctuation-driven transitions omnipresent in nature, such as liquid-crystal transitions, bone formation or in vivo protein crystallisation.

The new framework not only provides a formal derivation of the equations that govern the dynamics of real systems out of equilibrium, e.g. supersaturated vapours or colloidal solutions, but also it offers the missing link with classical dynamic density-functional theory (DFT). In fact, they show rigorously that DFT is the most-likely realisation of their formalism. This advances the long-standing debate in the DFT community, and in fact provides closure to this debate, about the inclusion of fluctuations. But even more, the researchers believe this opens the door to the discovery of new physical laws governing the dynamics of soft-matter systems out of equilibrium, under noise-governed conditions.