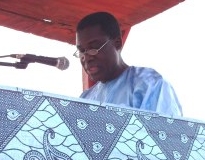 On the 16th January 2009, the Burkina Faso NTD Control Program launched their third integrated mass drug administration (MDA) in the North-Eastern district of Dori. The launch ceremony was officially opened by the Secretary General of the Ministry of Health, his Honourable Professor Adama Traore.

Also in attendance was the Director General of health, the Director of Disease Control, the WHO representative, the president and treasurer of RISEAL-Europe, an RTI representative, administrative officers and journalists. Delegates from the local community, including traditional and religious leaders were also present. 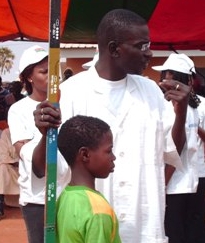 The graduated pole, estimating the number of Praziquantel tablets according to the child's height, was demonstrated during the launch in order to demonstrate to the community how the drugs will be distributed in each district. In total fifty children were treated to mark the start of the drug administration campaign.

Two months after the launch the integrated MDA had targeted all of 19 districts endemic for Schistosomiasis and soil-transmitted helminths and 27 districts for Lymphatic Filariasis. In April a further 18 districts will be treated for Trachoma.

To date the drugs have been provided by the following donors (Praziquantel highlighted in yellow has not yet been donated by pharmaceutical programmes but by USAID and Bill & Melinda Gates Foundation (BMGF) through the SCI):