Scientists have identified a protein that acts as a “master switch” in certain white blood cells, determining whether they promote or inhibit inflammation. The study, published in the journal Nature Immunology, could help researchers look for new treatments for diseases such as rheumatoid arthritis that involve excessive inflammation.

Inflammatory responses are an important defence that the body uses against harmful stimuli such as infections or tissue damage, but in many conditions, excessive inflammation can itself harm the body. In rheumatoid arthritis, the joints become swollen and painful, but the reasons why this happens are not well understood.

Cells of the immune system called macrophages can either stimulate inflammation or suppress it by releasing chemical signals that alter the behaviour of other cells. The new study, by scientists from Imperial College London, has shown that a protein called IRF5 acts as a molecular switch that controls whether macrophages promote or inhibit inflammation.

The results suggest that blocking the production of IRF5 in macrophages might be an effective way of treating a wide range of autoimmune diseases, such as rheumatoid arthritis, inflammatory bowel disease, lupus, and multiple sclerosis. In addition, boosting IRF5 levels might help to treat people whose immune systems are compromised. 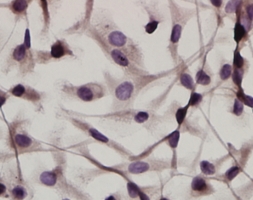 Researchers from Imperial College London previously developed anti-TNF treatments, a class of drug that is widely used as a treatment for rheumatoid arthritis. The drugs target TNF, an important signalling chemical released by immune cells to stimulate inflammatory responses. However, about 30 per cent of patients don’t respond to anti-TNF drugs, so there is a serious need to develop more widely effective therapies.

Dr Irina Udalova from the Kennedy Institute of Rheumatology at Imperial College London, the senior researcher on the study, said:

"Diseases can affect which genes are switched on and off in particular types of cells. Understanding how this switching is regulated is crucial for designing targeted strategies to suppress unwanted cell responses.

"Our results show that IRF5 is the master switch in a key set of immune cells, which determines the profile of genes that get turned on in those cells. This is really exciting because it means that if we can design molecules that interfere with IRF5 function, it could give us new anti-inflammatory treatments for a wide variety of conditions."

Gene association studies have linked variations in the gene that encodes IRF5 with an increased risk of autoimmune diseases. This led Dr Udalova and a PhD student in her lab, Mr Thomas Krausgruber, to investigate what role the protein plays in controlling inflammation.

They used engineered viruses to introduce extra copies of the IRF5 gene in human macrophages grown in the laboratory, making the cells produce more IRF5. When they did this to macrophages with anti-inflammatory characteristics, it made them switch to promoting inflammation. When they blocked IRF5 in pro-inflammatory macrophages using synthetic molecules, this reduced the cells’ production of signals that promote inflammation. The researchers also studied genetically modified mice that were unable to produce IRF5. These mice produced lower levels of chemical signals that stimulate inflammation.

IRF5 seems to work by switching on genes that stimulate inflammatory responses and dampening genes that inhibit them. It can either do this by interacting with DNA directly, or by interacting with other proteins that themselves control which genes are switched on. Dr Udalova’s group are now studying how IRF5 works at a molecular level and which other proteins it interacts with so that they can design ways to block its effects.

The study was funded by the Medical Research Council, the European Community, and Arthritis Research UK.

In 2007, Imperial College London and Imperial College Healthcare NHS Trust formed the UK's first Academic Health Science Centre. This unique partnership aims to improve the quality of life of patients and populations by taking new discoveries and translating them into new th erapies as quickly as possible.

For almost 100 years the Medical Research Council has improved the he alth of people in the UK and around the world by supporting the highest quality science. The MRC invests in world-class scientists. It has produced 29 Nobel Prize winners and sustains a flourishing environment for internationally recognised research. The MRC focuses on making an impact and provides the financial muscle and scientific expertise behind medical breakthroughs, including the first antibiotic penicillin, the structure of DNA and the lethal link between smoking and cancer. Today MRC funded scientists tackle research into the major health challenges of the 21st century.