Children across Britain are being asked to donate their milk teeth to create “Palaces”, a spectacular glittering sculpture made from crystal resin and decorated with retired pearly whites.

Children across Britain are being asked to donate their milk teeth to create "Palaces", a spectacular glittering sculpture made from crystal resin and decorated with retired pearly whites. The project is a part of an art-science collaboration that aims to inspire the nation with the regenerative potential of adult stem cells.

Artist Gina Czarnecki and stem cell biologist Professor Sara Rankin from Imperial College London hope that thousands of children will contribute to their participatory art project - one aim of which is to raise awareness of different sources of stem cells in the body, as well as questioning contemporary belief systems that dismiss age-old myth and folklore. Along with a form to send in with one's tooth, the project website - www.palaces.org.uk - provides a token which children can leave under their pillow to inform the Tooth Fairy of their donation to her palace.

The finished artwork will resemble a coral castle under water, two metres high and two metres wide, made from donated milk teeth. It is due to go on display at the Bluecoat, Liverpool in December 2011, and at the Science Museum in London in 2012.

In recent years, scientists have discovered that discarded body parts such as bones from joint replacements, umbilical cords, and fat from liposuction are unexpectedly rich sources of stem cells - master cells of the body that can proliferate indefinitely to replace lost or damaged tissue. Medical researchers are beginning to uncover the huge therapeutic potential of these adult stem cells for treatment of illness and injuries, including broken bones, heart disease and cancer.

Adult stem cells can also be extracted from the pulp of milk teeth. Scientists are investigating the potential of these cells to grow new teeth.

"The artwork will provide a focus to engage young people with this research and increase awareness, understanding and informed debate about these new biomedical possibilities and their social, cultural and ethical implications," says Professor Sara Rankin, from the National Heart and Lung Institute at Imperial College London. 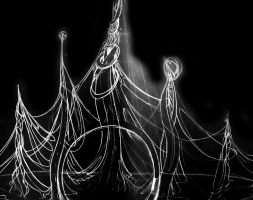 How the palace will look

"At the moment the debate around stem cell research is predominantly focused around ethical issues associated with the use of embryonic stem cells. We want to promote awareness about adult stem cells, such as those found in bone marrow or umbilical cord, which could be used to develop new treatments without any ethical issues."

"Different cultures have different traditions about where these teeth go, and what they are used for," said artist Gina Czarnecki. "Through exhibition and informed discussion, we're looking to explore the questions this raises about the value of waste matter and our attitudes to our own bodies as sources and beneficiaries of recyclable material."

1. Gina Czarnecki creates artworks to promote debate and generate complex associations. Her career to date encompasses film and installation, with an emphasis on human relationships to image, disease, evolution, genetic research and specialising in advanced technologies of image production. Gina's work has been exhibited internationally at major museums and festivals including the Natural History Museum, London; Australian Centre for the Moving Image, Melbourne; Adelaide Film Festival; Ars Electronica, Linz, and her works have won prizes internationally. Gina has just completed a new body of works 'Quarantine', supported by a grant by the Wellcome Trust for a three-year research residency at the Liverpool School of Tropical Medicine. She is currently producing the Wasted body of works for exhibition in late 2011.

2. Professor Sara Rankin is a stem cell biologist working at Imperial College London. Professor Rankin is a pharmacologist by training and is currently working in the exciting new field of regenerative pharmacology, her research focusing on invention of new medicines to stimulate the activity of stem cells present in the adult bone marrow. The idea is that such regenerative medicines could boost the bodies natural repair mechanisms and may, in the future, be used to accelerate healing. Professor Rankin runs regular stem cell workshops for schools, has been involved in public debates on stem cells and sits on the Education committee for the British Pharmacology Society.