Sugar-grain sized meteorites rocked the climates of early Earth and Mars, according to new study

Bombardments of 'micro-meteorites' on Earth and Mars four billion years ago may have caused the planets' climates to cool dramatically, hampering their ability to support life, according to research published today in the journal Geochimica et Cosmochimica Acta.

Scientists from Imperial College London studied the effects of the Late Heavy Bombardment (LHB), a period of time in the early Solar System when meteorite showers lasting around 100 million years barraged Earth and Mars. This bombardment discharged sulphur dioxide into the upper atmospheres of both planets and the researchers' analysis suggests that this may have had a catastrophic impact on their environments.

Micro-meteorites come from the rocky asteroid belt between Mars and Jupiter. These space rocks, which are the size of sugar grains, get dragged by gravity towards Earth and Mars. As they enter the planets' upper atmospheres, they heat up to temperatures of approximately 1000 degrees Celsius, releasing gases including sulphur dioxide. Sulphur dioxide in the atmosphere forms aerosols, consisting of solid and liquid particles, which deflect sunlight away from the surface, making planets cooler.

Professor Mark Sephton, an author of the study from the Department of Earth Science and Engineering at Imperial College London, says: "Far less of the Sun's energy was reaching Earth 4 billion years ago, which would have made it hard for early life to emerge. Recently denied of its protective magnetic field and constantly subjected to large meteorite impacts, Mars was also starting to lose its greenhouse gases at this time, causing global cooling. The influx of sulphur dioxide into the Mars's atmosphere would have dealt a further blow to a planet already on the ropes, making conditions for life even more of a challenge."

The team say that such a large influx of sulphur dioxide into early Earth's atmosphere had the same cooling effect on the climate as if there was an eruption of the size of the 1991 Mount Pinatubo eruption every year for 100 million years. The 1991 Mount Pinatubo eruption released 17 million tonnes of gases, including sulphur dioxide, into the atmosphere, preventing 10 percent of sunlight from reaching Earth and cooling the planet by half a degree Celsius. 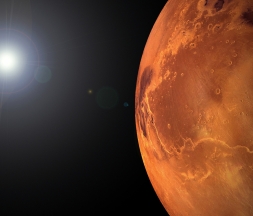 The researchers believe that on Mars, the meteorite bombardment would have turned a warm wet world into a cold and arid one

On Mars during the LHB, the scientists predict that the cooling effects of sulphur dioxide on the red planet's atmosphere would have been the equivalent of an eruption 1/34th the size of Mount Pinatubo occurring every year for 100 million years.

The scientists say that the environmental consequences of sulphur dioxide in Earth's atmosphere could have been disastrous. At this time, the Sun's energy was 30 percent weaker than it is today, meaning less energy was reaching the surface. The team believe that a weaker Sun, combined with increasing levels of sulphur dioxide from micro-meteorites, could have plunged Earth into an Arctic winter, lasting millions of years and making conditions for primitive microbial life extremely difficult.

On Mars, being further away from the Sun, the scientists suggest the environmental consequences would have been even more dramatic. High levels of sulphur dioxide would cause temperatures to plunge and water on the surface, in the form of lakes and rivers, to disappear, turning a warm wet world into a cold arid one.

Dr Richard Court, who is lead author of the study from the Department of Earth Science and Engineering at Imperial College London, adds: "These sugar-grain sized meteorites are left over material from the construction of our early Solar System, helping to build rocky planets such as Earth and Mars. Our study is helping us to see how these tiny space rocks could also bring environmental devastation on a global scale to early Earth and Mars."

The researchers came to their conclusions by simulating what happens to micro-meteorites as they entered the atmosphere, using a technique called flash pyrolysis to heat rock fragments that were identical to micro-meteorites to 1000 degrees Celsius. They then used infrared spectroscopy to measure the amount of sulphur dioxide released from these rocks. The team then used their results and calculations of meteorite in-fall rates during the LHB to determine how much sulphur dioxide was delivered to Earth and Mars from micro-meteorites.

This study is a continuation of earlier work by the team who have discovered that meteorites are not the source of the present-day methane in the atmosphere of Mars, raising hopes that the methane is being generated by life on the red planet. Their work has also shown that meteorites delivered other important gases to Earth during its early history that would have made it more habitable. In the future, the team will assess the contributions gases from meteorites on planets outside of the Solar System.

The research was funded by the Science and Technology Facilities Council.

1. "The contribution of sulphur dioxide from ablating micro-meteorites to the atmospheres of Earth and Mars", INSERT DATE, Geochimica et Cosmochimica Acta