Adapted from a media release issued by the Medical Research Council.

Giving fluids rapidly through a drip into a vein (fluid resuscitation) as an emergency treatment for African children suffering with shock from severe infections does not save lives, according to a major clinical trial funded by the Medical Research Council (MRC). The ground-breaking research showed that giving children fluids slowly to replace the needs of a sick child who cannot drink, rather than rapid fluid resuscitation, is safer and more effective in aiding recovery.

These findings, published today in the New England Journal of Medicine, challenge current World Health Organization (WHO) guidelines on how best to provide fluids to children in Africa with fever and shock caused by malaria, sepsis and other infections.

The trial known as FEAST (Fluid Expansion As Supportive Therapy) involved over 3,000 children in six hospitals across Tanzania, Uganda & Kenya. It examined the effectiveness of a long-standing treatment used across the world called fluid resuscitation. This treatment involves giving seriously ill children large volumes or ‘boluses’ of intravenous fluids quickly through a drip in their first hour at hospital to try to reverse the deadly effects of shock.

The trial results showed that children given fluids more slowly did better, with a 48-hour survival rate of 92.7 per cent, compared with 89.4 per cent of those children given boluses. Compared with giving children fluids slowly, fluid resuscitation caused three additional children to die out of every hundred treated.

The trial was stopped early because the independent committee overseeing safety saw that giving boluses was unsafe. However, all children who took part in FEAST had a better chance of survival than is normally the case in Africa, in part due to extra training given to hospital staff to give emergency treatments, such as oxygen and providing medicines for malaria and other infections.

"This is the first time anywhere in the world that fluid resuscitation has been evaluated for safety and effectiveness in such a large trial, even though it has been standard treatment for the last two decades in the United States, Europe and Australasia. 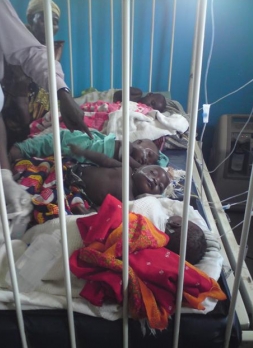 "The FEAST trial was set up with the hope that fluid resuscitation would help the many African children with malaria and septicemia. Around one in ten children in Africa admitted to hospital with these deadly infections are in a state of shock.  Although there are effective medicines for these illnesses, too often children arrive in hospital already very sick, with many children dying within hours of admission.  Large-scale clinical trials of this nature carried out to the highest levels are crucial if we are to find new ways to keep children alive when they come into hospital.

"Disappointingly, we found that rapid fluid resuscitation had no benefit- our only conclusion is that boluses are harmful when used for shock in the illnesses we studied."

“The results have surprised me, particularly as I had seen some children getting better after being given large volumes of fluids. But more importantly the results went against the recommendations of the WHO and the normal practice in wealthy countries, and this surprised me greatly. Finding this out before we started to encourage the use of fluid resuscitation children with severe infections and shock across Africa was incredibly important. It will save many lives in future.”

The study authors agree that further research is needed in countries where fluid resuscitation is already standard practice, although the results in Africa may not be directly applicable to wealthy countries. One reason for this is that sophisticated life support equipment is available in wealthier countries and is available along with fluid resuscitation as part of a ‘package of care’.

Professor Michael Levin, from the Department of Medicine at Imperial College London, said:

"Unlike the situation in African countries,  in the  UK  and other developed countries, critically ill children have the backup of Paediatric Intensive Care Units, where  the child's breathing  is supported by mechanical ventilation and drugs are used to support cardiac function. Fluid boluses may still be beneficial in this setting,  when given with these  other components of intensive care which are not available in Africa. However, further research is now essential to understand whether the results of our trial may be relevant  to treatment of critically ill children in developed countries."

“The treatment may not carry the same risks in wealthy countries because children are healthier, and in particular have few problems of underlying long-standing malnutrition or anaemia. However, the clear findings from the FEAST trial do question the use of boluses for severe infections even in wealthy countries and more research is needed.”

The researchers have stressed the need to continue to use fluid resuscitation to treat diarrhoea and other conditions like burns and trauma, where children lose fluids. For these conditions, where fluid resuscitation will continue to be a vital life-saving treatment, they advise that curren t WHO recommendatio ns should stay the same. Children with severe malnutrition were not included in the trial as fluids are not recommended as part of their treatment.

The study was coordinated by KEMRI-Wellcome Trust Research Programme, Kilifi, Kenya in collaboration with scientists from Imperial and the Clinical Trials Unit of the Medical Research Council in London (MRC-CTU).

The trial was funded by the Medical Research Council (MRC) and sponsored by Imperial College London.