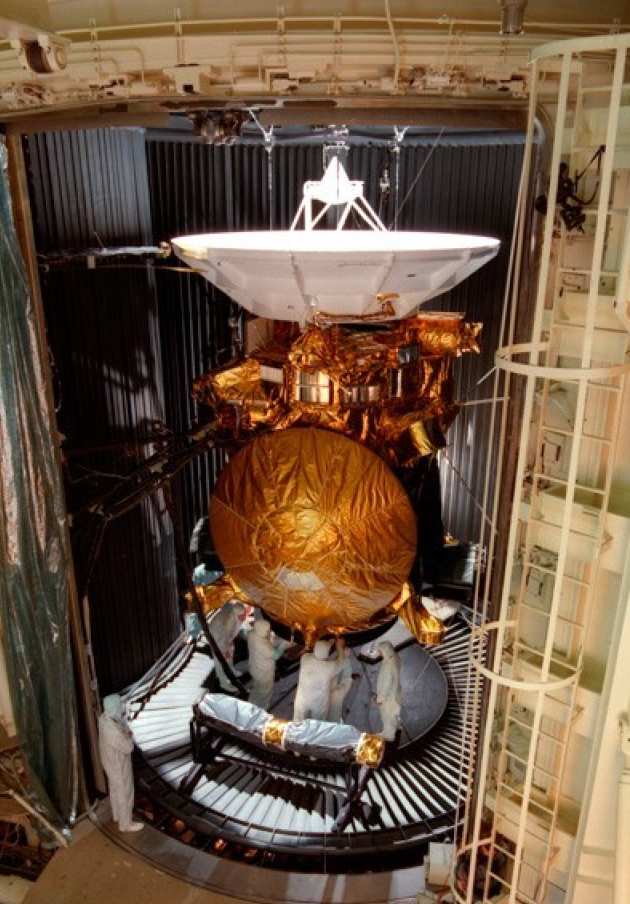 The Cassini-Huygens spacecraft was the 4th flagship-class mission of NASA, launching in October 1997 with the aim of exploring the region surrounding Saturn, including its moons, the rings and the characteristic features of its magnetosphere. The Cassini spacecraft was more than 6.7 metres (22 feet) high and more than 4 metres (13 feet) wide. Because of the very dim sunlight at Saturn's orbit, solar arrays were not feasible for the mission. Instead electrical power is supplied by a set of radioisotope thermoelectric generators (RTGs), which use heat from the natural decay of plutonium-238 to generate electricity and run Cassini's systems. These power generators are the same design as those used on the Galileo and Ulysses missions.

The spacecraft (left) was comprised of both the NASA Cassini orbiter, and the ESA Huygens probe. The spacecraft reached Saturn on the 1 July 2004, where it ended the Cruise phase, which included fly-bys of Earth, Venus and Jupiter, and began the Tour phase. Cassini fired its main engine for 96 minutes to brake the spacecraft's speed and allow it to be captured as a satellite of Saturn.  The Huygens probe detached from the Cassini orbiter in December 2004, landing on the moon Titan in January 2005.

The Cassini spacecraft then orbited Saturn for 13 years, having initially only been planned to orbit for 4 years. Cassini had significant spatial coverage of Saturn’s magnetosphere during the mission which stretched over half a Saturnian year, allowing us to see how the system behaves and evolves over time. The mission ended with the Grand Finale – a series of 22 orbits that on closest approach passed between the inner edge of the rings and the planet, ending with the spacecraft plummeting into the Saturn’s atmosphere on September 15th 2017. This previously unexplored region was an ideal environment for resolving some of the big questions remaining about Saturn, including the internal magnetic field structure.

For the Grand Finale orbits, the Fluxgate Magnetometer (FGM) had to prepare for an unplanned portion of the mission. This previously unexplored region, where the magnetic field intensity is incredibly high, required calibration of the FGM instrument for this different environment. The spacecraft performed rolls in two different directions at the periapse of multiple Grand Finale orbits to allow calibration for these new observations.

The complete calibrated magnetometer dataset is available here on MAGDA. Analysis of the proximal orbits is part of the ongoing work by the Cassini magnetometer team. New results are continually being published from this exciting dataset and it will carry on revealing the underlying nature of Saturn's magnetosphere long after Cassini's journey ended.