The role of the Plasma Interface Unit (PIU) is to act as an interface between the five plasma instruments constituting the Rosetta Plasma Consortium and the spacecraft by providing a single path for the transmission of scientific data to the ground and commands sent from the ground. The PIU also provides a safely managed power supply to the instruments. The PIU incorporates a number of novel technical solutions to ensure that the scientific output of the RPC group of instruments is maximised. These solutions also ensure that the risks of malfunction during the mission are minimised by a failure tolerant design. This ensures the required robustness to survive on a long mission and in the cometary environment. 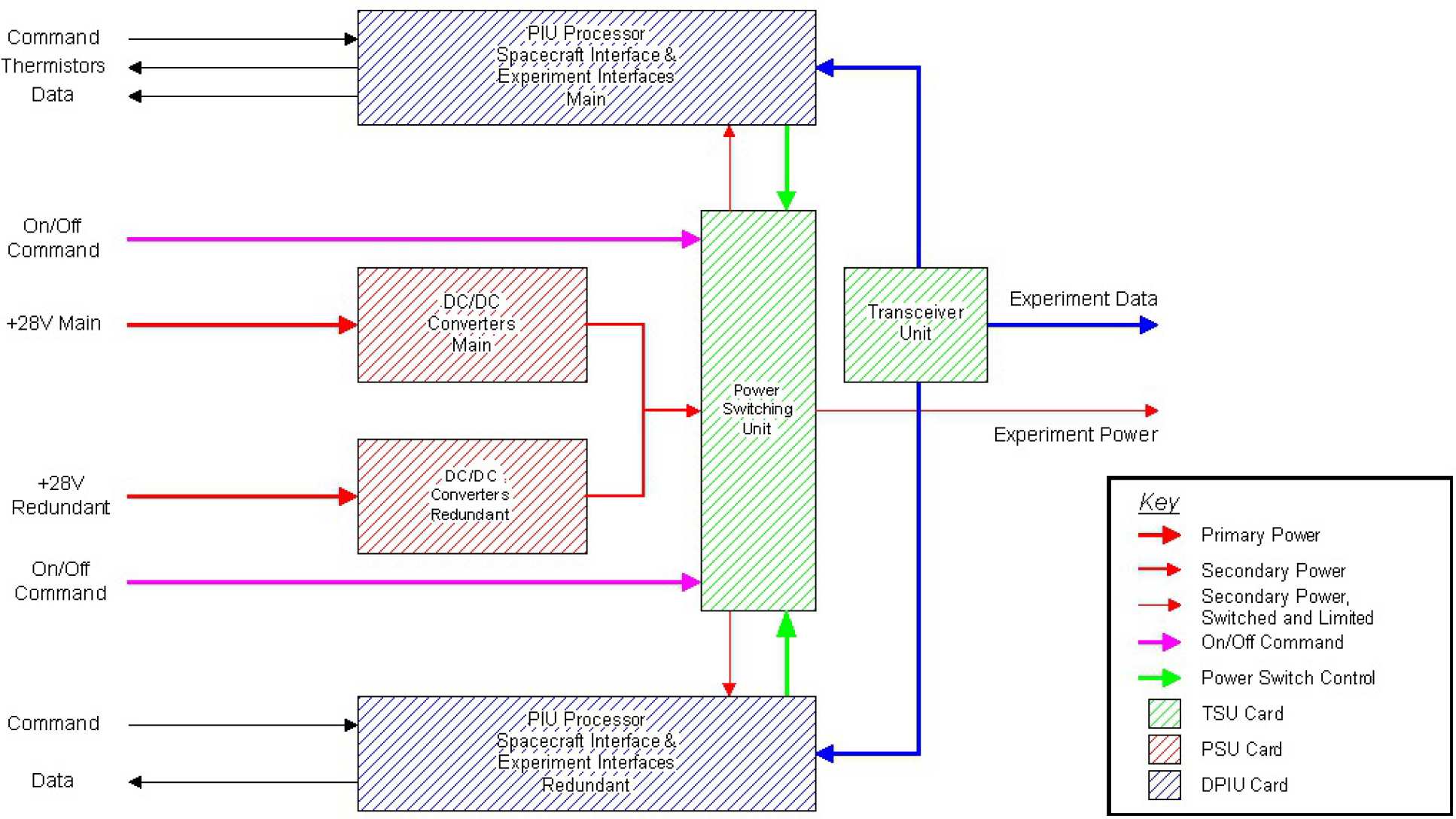 Main Functions of the PIU

The PIU has been designed to inplement these tasks using full redundancy of the instrument-level function. There are redundant interfaces to the spacecraft and two fully redundant processor and power converter units. Similarly, there are redundant transceiver units connecting the PIU to the individual experiments. The design requirement implemented in the PIU is that no single point failure should disable the RPC experiment as a whole, for the safe operation of the investigation during the long mission of Rosetta. Optimization of weight and space has been achieved by integrating the PIU, the power supply and the electronics of three sensors in the same housing, designed and built by Imperial College, the so called RPC-0 BOX (see below).

Image on the right: RPC-0 Box

Image below: Cut-away view of the RPC-0 Box 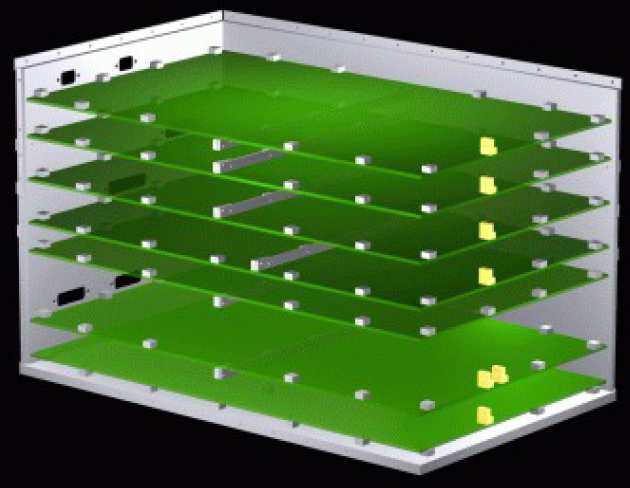 The PIU data-processing unit is responsible for the managment of all the commands and data products which flow between the Rosetta spacecraft and the five RPC experiements. Since the experiments have very different processing capabilities and data products, the PIU needs a common interface to each in order to minimise the complexity of the PIU embedded software. A protocol based on the exchanges of 8-byte packets has been developed at Imperial College, using the IEEE 1355 standard as a starting point. Most of the complex low-level functionality of the IEEE 1355 is hard-wired into a programmable Gate-Array device, so that the overhead on the host processor is minimised. Each IC-LINK comprises two such transceiver devices, one in the experiment and one in the PIU.

The IEEE 1355 specifies a number of methods for point-to-point communication. Each method is divided into a physical layer (options for electrical or fibre-optic connection), and a logical layer (protocols for data exchange, incorporating various levels of data security). For RPC, the major design requirements are minimise the mass and power of the transceivers, whilst providing the host processor with a simple and reliable interface. Since the logical and physical layers are separate, it is possible to use a logical layer normally intended for use over optical fibre, where data and data-clock are encoded together. This reduces the interconnect between transceivers to a single line in each direction -- one for transmit and one for receive. An optical fibre connection is not appropriate in this application, but can be replaced by a cable since the data rates are modest.

When serial data is to be transmitted over a single line, i.e. without the use of separate clock and strobe lines, the chosen coding must allow for recovery of the clock from the data. One such coding, known as 'three of six', is described in the IEEE 1355 standard. Each byte is represented as two six-bit symbols, where each symbol has three ones and three zeros (hence the name). There are twenty such valid symbols, sixteen of which are used for data and two for control symbols. The two control symbols are used in combination to build control characters; these are used during initialisation and also to maintain flow control. This coding provides a set of rules which enables the boundries between characters to be identified, and the synchronisation to be subsequently held and checked. In the IC-LINK some of thr spare symbols are used to define an additional control character which represents a timing signal. This is used to send a common time reference pulse to all the experiments simultaneously. The clock signal is multiplexed on the link with the data in a manner which is totally transparent to the data.

For the Rosetta mission, the low power and low mass properties of the IC-LINK are particulararly important. Mass is reduced compared to a more traditional serial interface, since the data, the data clock and the timing signals are all carried on a single line. The power consumed by the transceiver is minimised by clocking the device as slowly as possible. A balance must be struck between power and the desired rate of the link. The interface to the host microprocessor is designed to be both simple and flexible. The experiments and the PIU exchange packets of a fixed length, with the flow control and error checking handled entirely within the hardware of the transceiver device. The simplicity of the interface is necassary since the RPC experiments operate a variety of microprocessors and, in the case of the MAG experiment, with no processor. Whilst the IC-LINK is optimised for use in a microprocessor based system, the MAG experiment is able to operate the IC-LINK through provision of status pins on the transceiver device. The link status may be polled by reading a status register, or the descrete status pins on the device may be used to generate interrupts.

As stated previously, the IC-LINK comprises two transceiver devices connected together to from a point-to-point link. In the RPC package, the PIU and the electronics for the LAP, MIP and MAG experiments are located within a single electronics box enclosure. In this configuration, the transceivers are connected together by just two wires, one for data in each direction. This is the single-ended mode, suited to units which share a common ground reference, and minimises the mass and power consumed. For interfacing to the IES and ICA experiments, which are remote units some metres away from the PIU electronics, a balanced differential interface is used. This requires two wires -- data and the complement of data -- in each direction. The power consumed by the differential interface is higher, but this arrangement improves signal quality at the remote unit.

Used in the RPC package, the IC-LINK provides a simple means of interfacing between the experiments and the PIU, and is efficient in its use of the scarce mass and power resources. Handling the flow-control and error checking functions within the transceiver device itself, the IC-LINK allows the experiments' processors to concentrate on their scientific tasks.