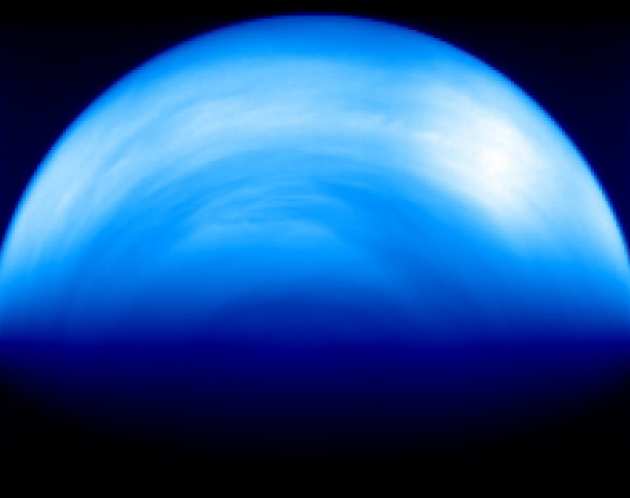 Under the leadership of Marina Galand, we have been selected as a supporting investigator for the Venus Express mission. Our scientific activity comprises four inter-connected themes (see below for further information about the themes):

Study of the upper atmosphere of Venus is part of our research into Planetary Aeronomy. 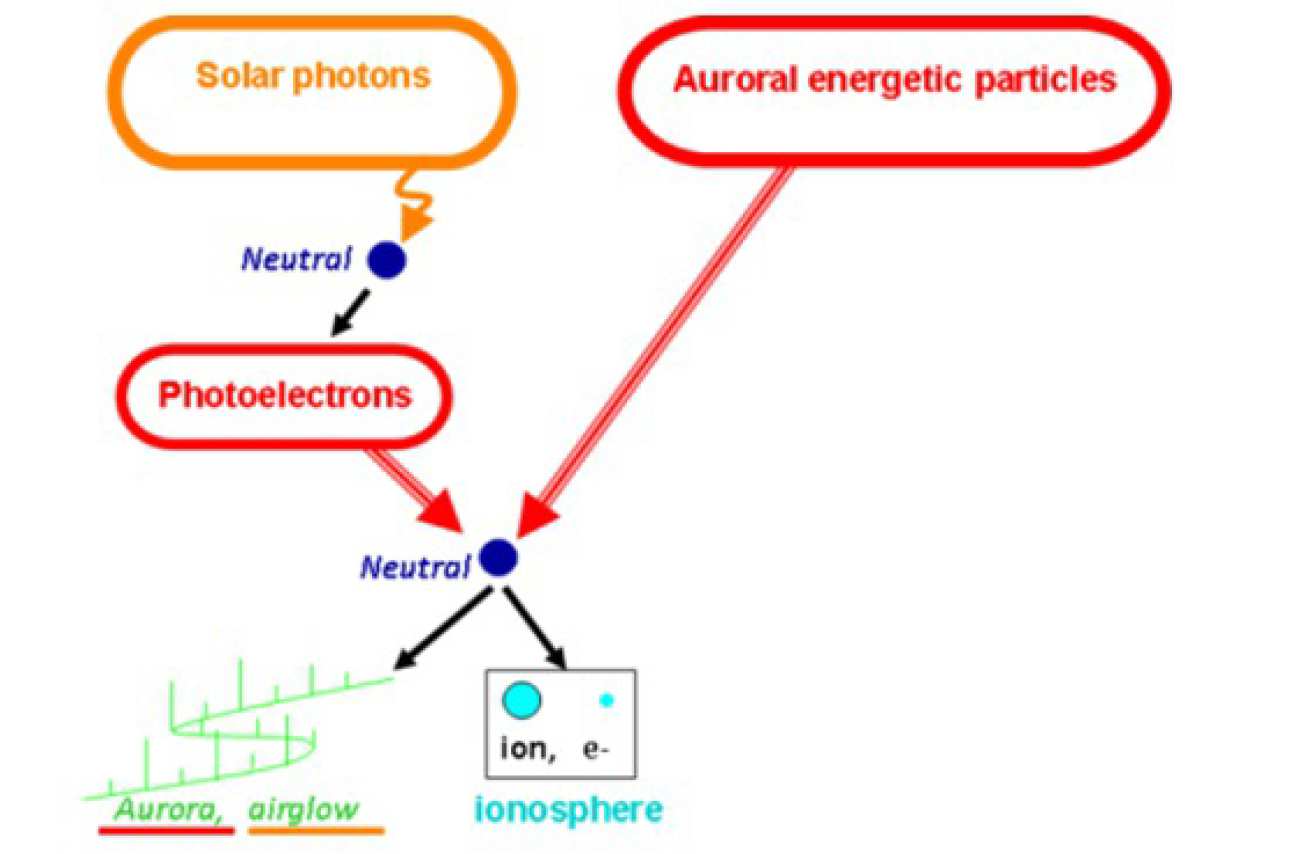 Objectives: To identify the major energy sources and transport mechanisms and to assess their contribution to Venus' ionosphere

We intend to address the above objectives through a multi-instrumental study including ASPERA, MAG, SPICAV, and VeRa dataset. The binding elements of the various datasets are comprehensive modelling tools which we have been developing and/or applying to planets and moons in the Solar System. Similar work is currently being carried out to understand the Cassini observations of Titan's ionosphere [Galand et al., 2006]. 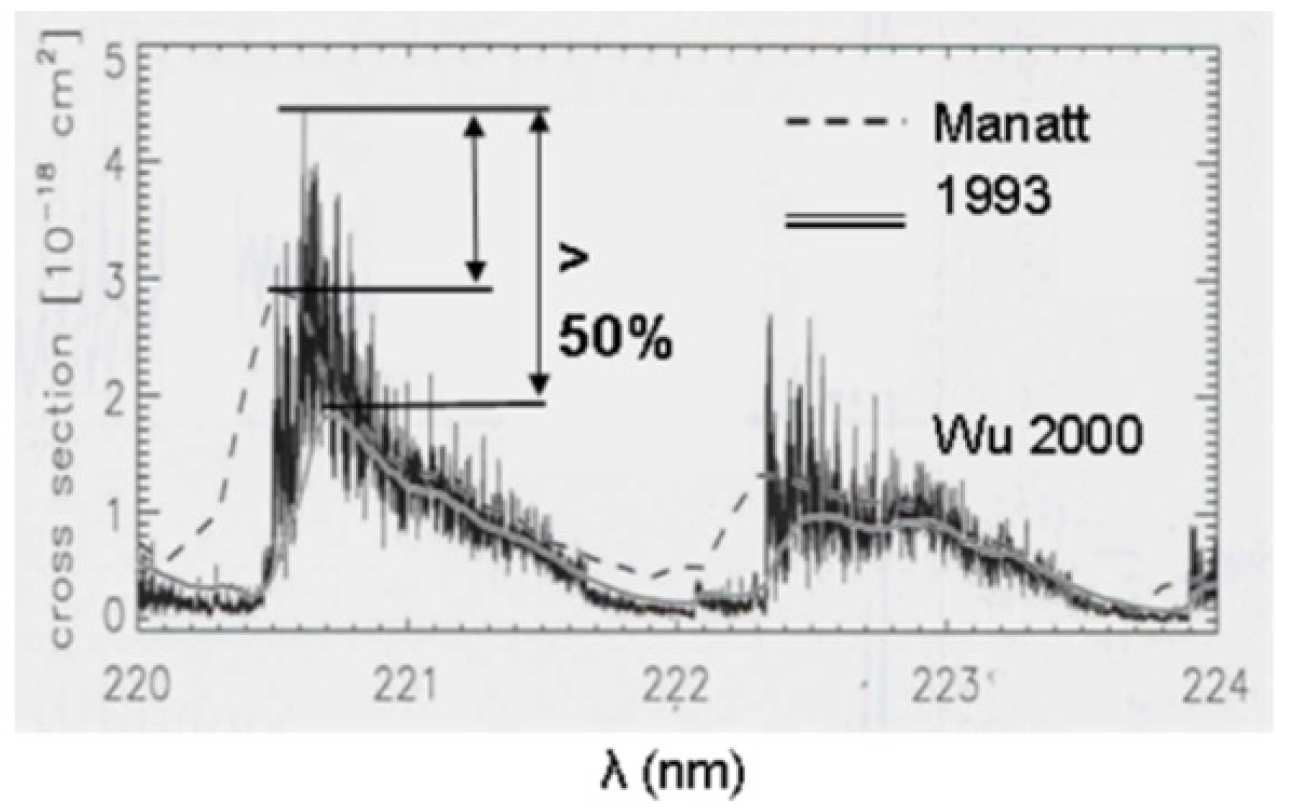 Figure 2 (below):
Status of our laboratory measurements of  SO2 photoabsorption cross sections 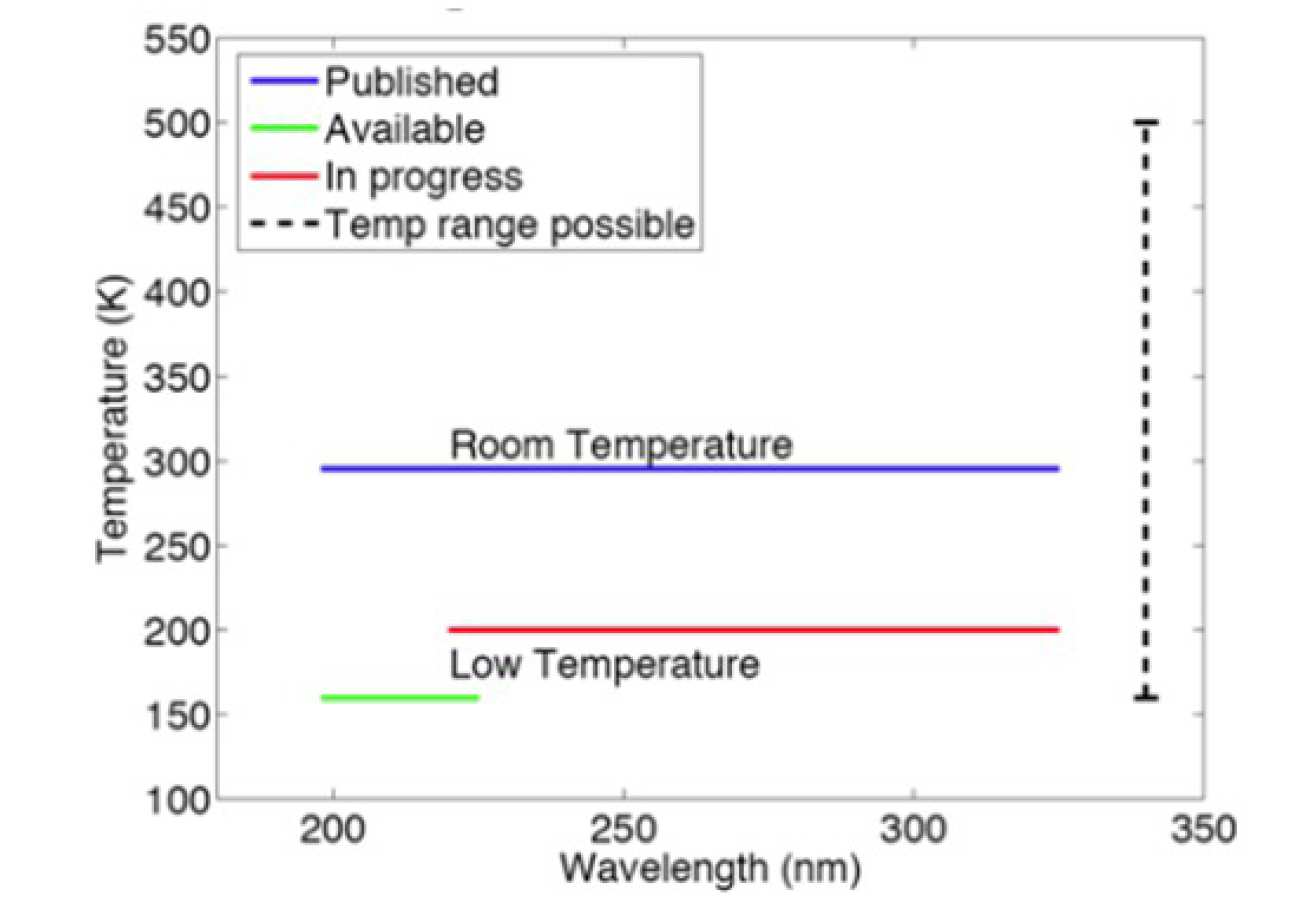 Objectives: To characterize atmospheric structure, dynamics, and energetics in Venus' mesosphere and thermosphere

The mesosphere extends from around 65 to 110 km. Temperatures have typical values of around 170 K throughout the region. The dayside thermosphere, located above 110 km, is the region of strongest UV/EUV heating with temperatures of 250-350 K, depending on solar activity. Nightside temperatures above 150 km reach 100 K, being colder than the mesosphere and giving the region the name of cryosphere.

We intend to combine observations by SPICAV, VIRTIS and the PFS, which ideally complement one another in terms of altitude coverage and parameters measured (constituent distributions and abundances, thermal structure and some constraints on dynamics) in order to characterize the atmospheric properties and variability, particularly at polar latitudes. Theoretical modelling work will then form a central binding element between the individual instrument observations, allowing us to better understand ongoing physical processes and placing localized measurements into a global context. Similar work is currently being carried out to understand the Cassini observations of Titan's upper atmosphere [Mueller-Wodarg et al., 2006a; Yelle et al., 2006]. 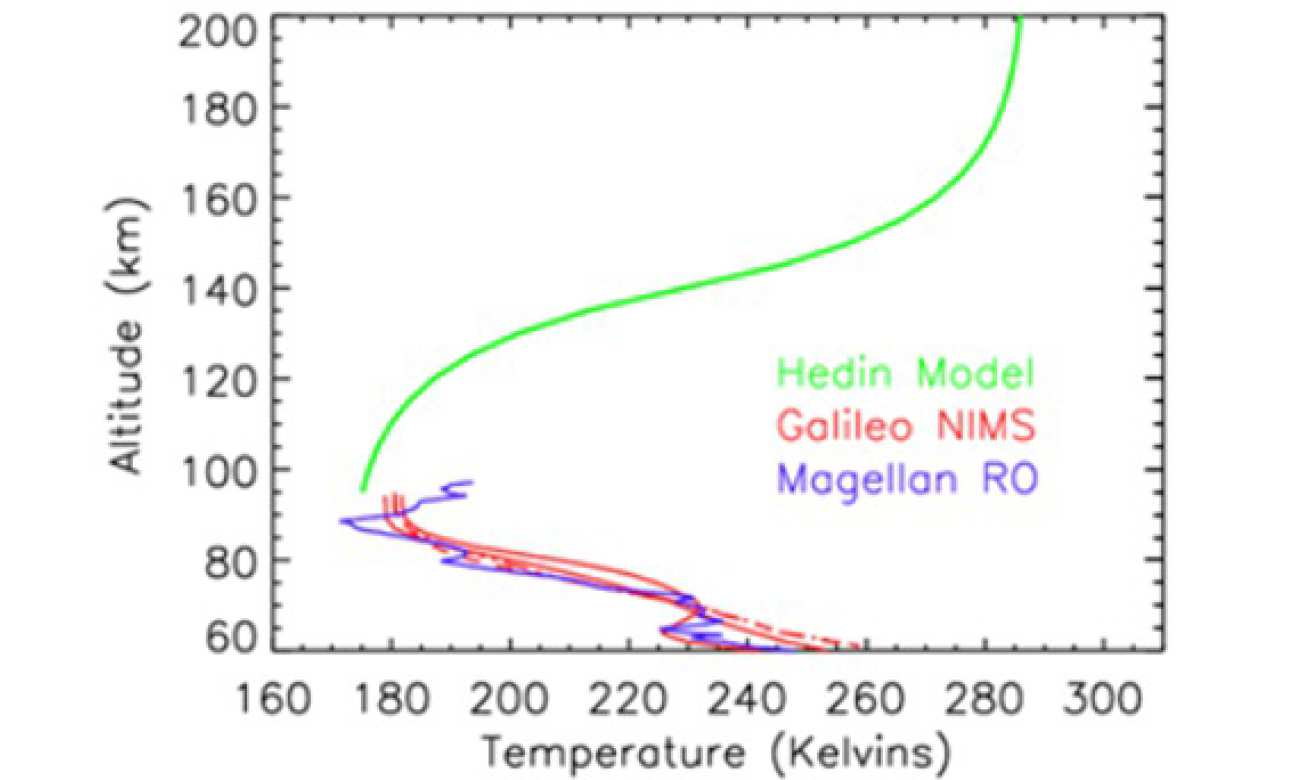 Figure 1 (right):
Temperature profile in Venus' atmosphere. Values below 100 km are based on observations by the Magellan Radio Occultation experiment (Hinson and Jenkins, 1995) and the Galileo Near Infrared Mapping Spectrometer (Roos-Serote et al., 1995). Values above 100 km  altitude are noon values taken from the Hedin empirical atmosphere  model (Hedin et al, 1983), which itself is based upon observations by   the Pioneer Venus Orbiter Neutral Mass Spectrometer (Niemann et al.,  1980). 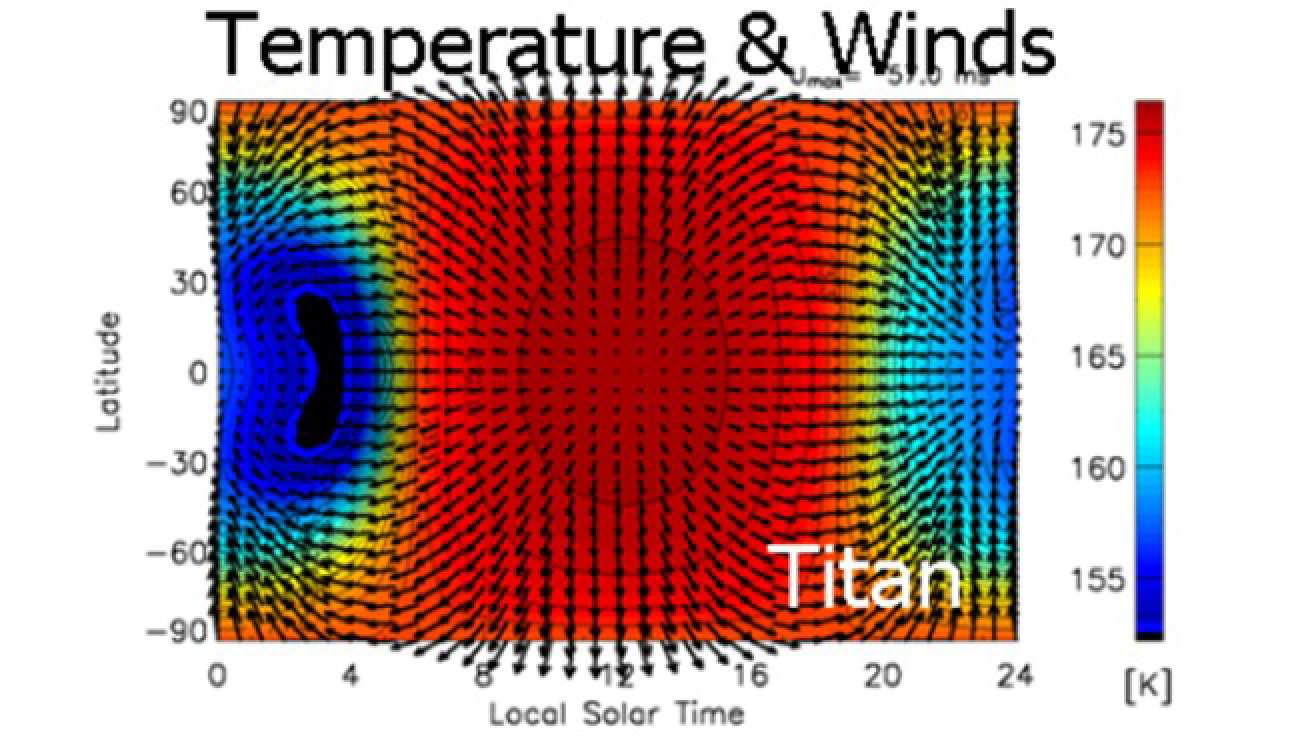 Figure 2 (left):
Temperature and wind profile in Titan's thermosphere at the exobase, as calculated by the Titan General Circulation Model of Mueller-Wodarg et al. (2003). The figure is an example of thermospheric structures and dynamics driven by solar forcing alone and illustrates the calculations we intend to carry out for Venus as well.

Objectives: To study plasma momentum and energy transfer from the Solar Wind to Venus' exosphere and ionosphere as a way to assess the loss of atmosphere due to this interaction. 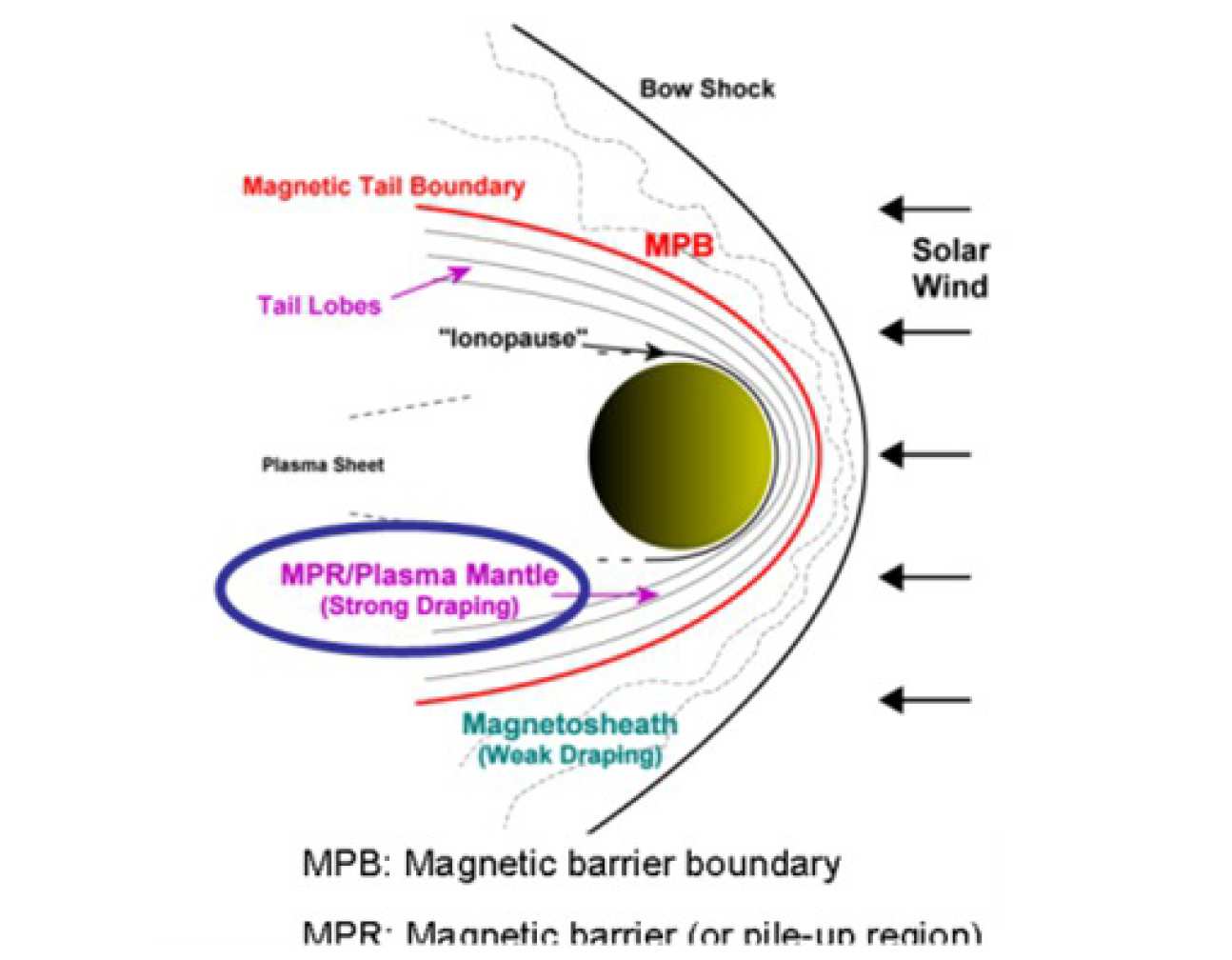 We study the consequences of the electromagnetic coupling between the solar wind and the plasma originated from the photoionization of Venus's atmosphere and exosphere. Processes such planetary ion pickup and mass-loading are analyzed using magnetic field data from Venus Express. In particular, we are interested in the structure of the Magnetic Pileup Boundary (MPB), i.e., the outer edge of the so-called magnetic barrier and magnetic tail. This boundary is extremely important as it encloses the region where the planetary plasma escapes downstream from the planet due to the interaction with the solar wind.