Animal cell technology is an area of rapid expansion and one that produces a wide range of high-value products, including vaccines, recombinant proteins, drugs for cardiovascular, respiratory and immune diseases, and monoclonal antibodies. commercial synthesis of monoclonal antibodies (MAB) represents one of the most important products in the biopharmaceutical industry because of their diagnostic and clinical applications. However, the production of industrial scale quantities of MAB is an expensive and challenging task.

There are a number of complications that make it a difficult process to ensure that the culture is growing under optimal conditions at all times. Furthermore, the process control and optimisation in the hybridoma culture industry lags far behind the developments in other process industries; as a result, the current industrial control of hybridoma cell culture is still fundamentally manual. Complications arising in these systems include the requirement to grow cultures in complex media, the lack of on-line measurements for many of the key substrates, metabolites, and products, the limited and noisy nature of much of the available experimental data and the extremely complex underlying reaction system. Models of animal cell culture systems have a wide range of potential applications, such as analysis and prediction of experimental results, optimisation of culture conditions for prolonged viability, and perhaps most importantly, the investigation of fundamental metabolic processes and their subsequent elucidation.

Our research programme sets out to integrate modelling, experiment design and validation, and control and optimisation into a single framework that would lead to increased productivity, regulated product quality, and reduced costs for mammalian cell culture systems.  The integration of these three research tools represents a unique, novel, and interdisciplinary approach to addressing the complicated research and industrial problem of model-based control and optimisation of mammalian cell culture processes. 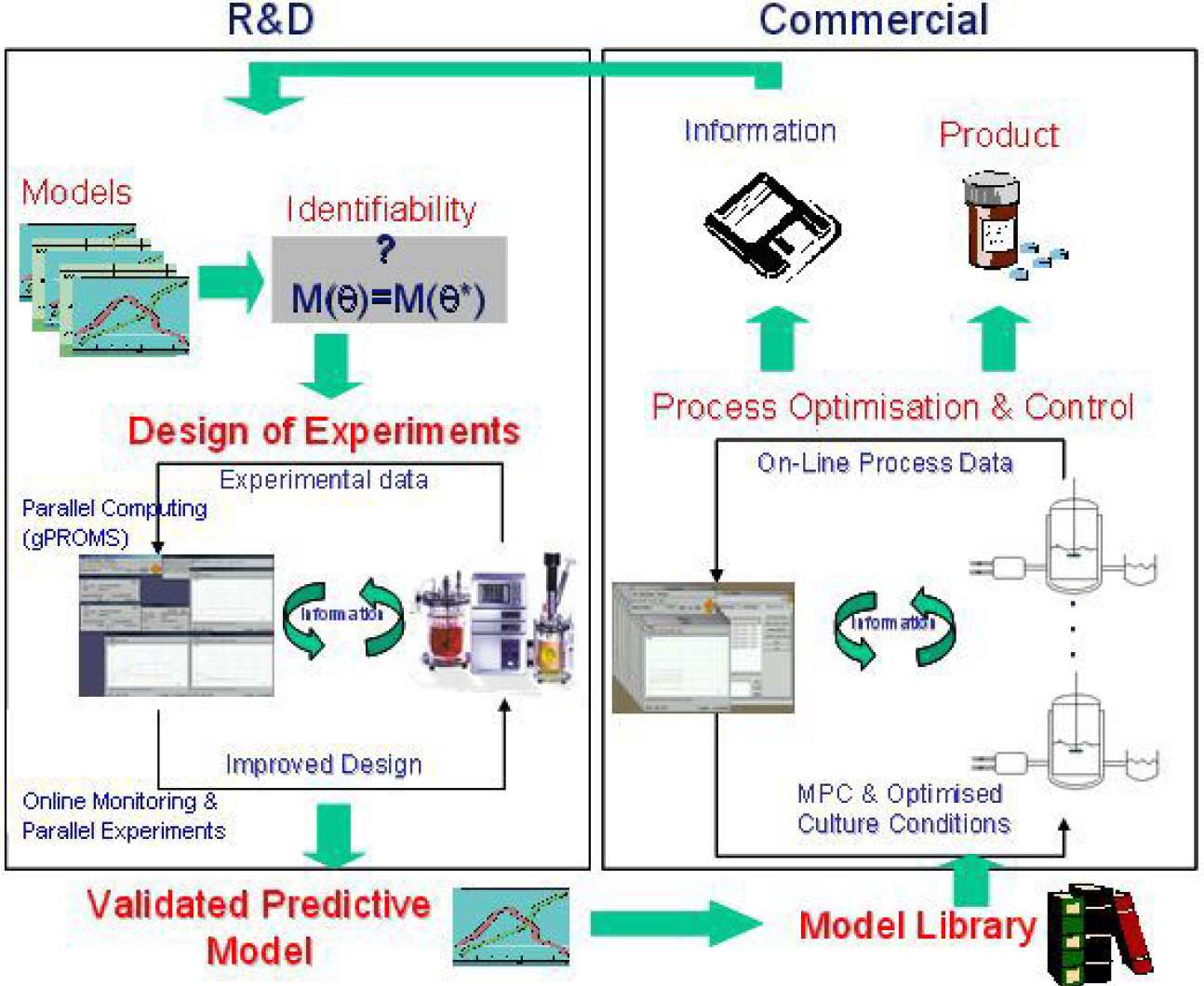 Mammalian cells are currently the preferred expression system for high-value bio-pharmaceutical products, in particular, monoclonal antibodies. However, though perhaps safer, the culture process is relatively inefficient when compared to other emerging technologies, and could greatly benefit from the application of mathematical models. In-depth models can be utilised as tools in predictive cell biology. For example, they may be used to perform in-silico experiments, adding insight to previously unexplored behaviour. It is clear that the biological behaviour of cells is of such complexity that any model, to be robustly predictive, must be sufficiently structured and detailed in terms of the captured biology.

Two fundamentals aspects of cell behaviour any model must include are metabolism and the cell cycle. There are two prominent approaches to modelling cells. Population balance models capture the heterogeneity but little structure with which to differentiate the cells due to the computationally intense nature of their solution while single-cell models are good at describing structure but cannot describe heterogeneity. A new model is developed that incorporates both of these important features. The population balance framework is used to capture cell cycle effects while a single-cell model takes account of some features of intracellular metabolism. Structured models necessarily contain a number of model parameters that require estimation during model validation. The model developed has a large number of parameters. A systematic approach has therefore been pursued in which a new technique has been developed that yields useful information on the ease of estimation of these parameters from potential experiments. The technique, written into an algorithm, is developed through initial application to a structured model for mammalian cells. The algorithm is subsequently applied to the new model. The new model is validated using limited experimental data.

It has been widely reported that metabolism, cell growth, cell density, product secretion and specific antibody productivity in mammalian cells are strongly affected by osmotic conditions. In general cell culture media are designed to have an osmolarity between 280-320mOsm/kg, and it is known that varying the osmotic pressure can enhance antibody productivity per cell and also culture longevity in various cell lines. However, due to the suppressed cell growth under non-iso-osmotic pressure, enhanced antibody productivity per cell does not necessarily result in a substantial increase in final antibody concentration. Extensive effort has been made to overcome this drawback, however, without a more detailed understanding of the biological effects of osmolarity on the antibody production process in cells, a systematic method of improving antibody production under non-iso-osmotic cultures will remain elusive. To understand the effects high-lighted above, oligo-DNA microarrays have been employed in the present study. This gene expression-profiling technique permits the analysis of the expression levels of thousand of genes simultaneously.

To understand the effect of osmotic pressure, three sets of experiments were designed; these included: (1) experiments to understand the effect of different osmotic pressures (230, 290, 370 and 450mOsm/kg created by NaCl), (2) experiments to understand the effect of different osmolytes (370 and 450mOsm/kg created by NaCl, KCl and sorbitol), and (3) experiments to understand the effect on different stages of growth (difference in 290 and 370mOsm/kg lag, exponential, stationary and decline phase). During the cell culture process, antibody productivity, metabolism and ion balance were analysed using HPLC and a BioProfile Analyser. Differences between these osmotic cultures have been identified in terms of growth, antibody production, calcium accumulation, NH4+ metabolism, glucose, and lactate. From the analysis of gene expression, it is demonstrated that regulations of over 500 genes are implicated in processes known to be affected by changes in osmotic pressure; including ion transport, cell cycle distribution, proliferation, cytoskeletal organization, cell metabolism, immune response and cell adhesion genes.

The approach taken in this study (transcriptional profiling) has provided a more systematic understanding of intracellular and physiological changes that occur in GS-NS0 cultures. For example, even with similar growth and metabolism profiles under non-iso-osmotic cultures it is seen from the gene expression data, that the reason for the slower growth and lower cell density was very different for either cultures. It is therefore highly probable that improved strategies for the enhancement of antibody production will not result through a uniform approach for all non-iso-osmotic cultures but through a more tailored protocol in each conditions through, for example, the activation of mitogen-activated protein kinase (MAPK) cascades, apoptosis pathways, the transcription and the subsequent ER-Golgi secretory pathways. It is however duly noted that the improvements suggested from this work can be further enhanced when used in conjunction with the following methods: metabolic engineering, process control or plasmid design.

Towards the optimisation of the production of monoclonal antibodies

Monoclonal antibodies are the fastest growing biopharmaceutical product, traditionally produced by in vitro mammalian cells cultures. Industrial operation of these systems is mainly guided by empirical knowledge, despite the advantages of model-based approaches widely used in other engineering applications. Mathematical models of protein-secreting cell cultures can be used for in silico experimentation in an effort to reduce expenditure on unnecessary experimentation and to facilitate our understanding of the underlying biology. Our work focuses on the development of a computationally tractable mathematical model for cell po pulati on dynamics, antibody synthesis and glycosylation, and o n its subseq uent u se for mod el-based contro l and optimisa tion. Towards this goal we use established process engineering techniques, such as parameter sensitivity analysis and model-based design of experiments.

Mammalian cell cultures are widely used to express recombinant human proteins in the biopharmaceutical industry. The cell cultures are known to behave differently under distinct conditions. For example, a cell culture would have different steady-state cell densities, specific product synthesis rates, and specific wastes generation rates under an identical set of culture environment when the culture histories were varied. This phenomenon is believed to originate from cellular genetic regulations. It is a challenge to model such cell behaviours but potentially this can assist the so far empirical optimization of control variables in these production processes. The objective of this project is to model mammalian cellular regulations of activities that would affect the production of target recombinant proteins and to apply the model on process control as well as optimisation. We would focus on Chinese Hamster Ovary (CHO) cells, which are commonly used in industry, to model their cellular/genetic controls subject to different levels of nutrients supply for the purpose of maximising product concentration and quality.