Tissue engineering is an interdisciplinary field at the intersection of engineering, and biology and medicine. It requires the considerable input from biological scientists, who provide the insight to the various developmental control mechanisms of the cell and are able to manipulate the cell at a genetic level, and the contribution of material scientists who develop the structural scaffolds. 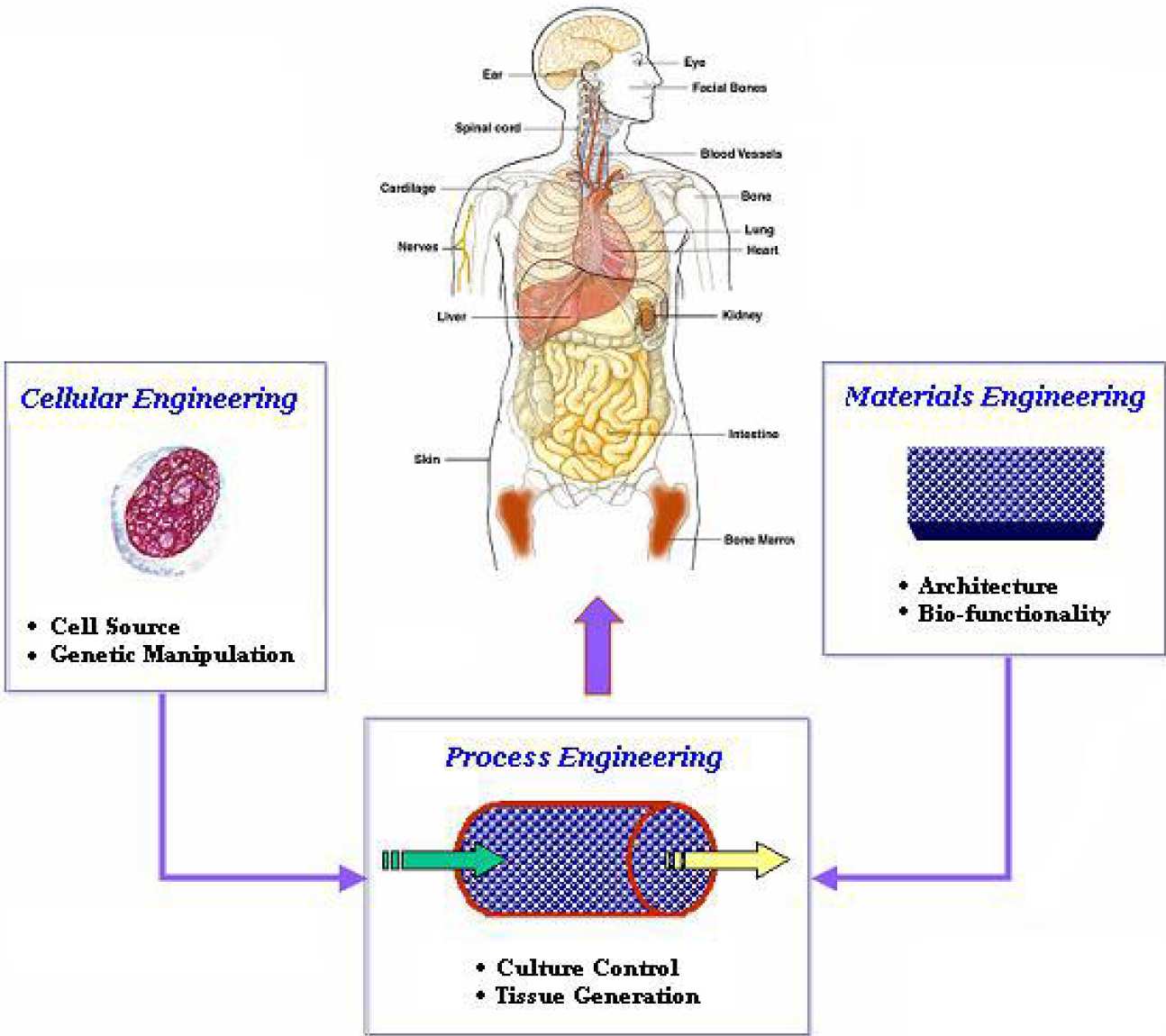 Bone marrow, in adults, is the site of blood formation (haematopoiesis). The human marrow has an intricate 3-D architecture and is highly vascularised, consisting of the central sinus, the sinusoid network, and nutrient artery, and the radial arteries. Haematopoiesis is a delicate process that is controlled precisely by the bone marrow microenvironment.

Currently, most ex vivo bone marrow culture systems are 2-D involving the use of flask cultures.  However, it is well established that the marrow microenvironment is critical in the regulation of the stem cell self-renewal, proliferation, and differentiation.  The ability to reproduce the process of blood formation in a fashion that mimics the natural process is of great importance since such a system can be used to elucidate the mechanisms regulating haematopoiesis and can also be used for drug toxicity and efficacy studies.

The project will involve the development of a 3-D scaffold, which mimics the bone marrow architecturally. To accomplish that, a computer model of the 3-D scaffold will be developed that will account for the perfusion (flow) and transport of nutrients, growth factors, and metabolites.  As a result, design parameters will be obtained for the production of the scaffold. The model will be validated experimentally. Subsequently, a perfusion system will be developed (or adopted) that will contain the 3-D scaffold. Finally, experimental results will be obtained using human (or murine) bone marrow cells.

The aim of my project is the development of a 3-D perfused culture model of human AML for the study of this disease using different biomimetic scaffolds. The research could lead to the discovery of novel aspects of the pathogenesis and potential treatment strategies for AML and could also reduce the number of animal models  used to study the disease. To find the best suited 3-D scaffold that could mimic the bone marrow, a group of bio-inert and biocompatible materials approved by the FDA will be tested, such as poly(D,L-lactide) (PDLLA), poly(D,L-lactide-co-glycolide) (PLGA, 53:47), polystyrene (PS), poly(methyl methacrylate) (PMMA), polycaprolactone (PCL) and polyurethane (PU). Three different leukaemic cell lines, HL-60, K562 and Kasumi-6 will be used prior the utilisation of primary leukaemic cells obtained from patients undergoing bone marrow aspirates.

Human bone marrow (BM), as the site for haematopoiesis and a tissue of complex architectural organisation, relies on its micro-environmental niches for the regulation of stem cell renewal, proliferation, and differentiation.  Within these microenvironments, control for these processes can be, partly, attributed to oxygen partial pressure (oxygen tension), and hence it is important to know the spatial oxygen tension variations in the BM ex tra-vascular space.  However, due to BM’s in accessibility, especially in humans, experimental measurements are not possible. Modelling offers the most credible alternative, although to date, detailed analyses of transport properties in the marrow have been deficient and there is a lack of reliable and predictive oxygen tension models despite BM’s important function and their potential wide range of applicability.

In our study, we have proposed a physiological relevant model, which is based on the Kroghian model (cylindrical central vessel supplying a concentric tissue), for the detailed analysis of oxygen mass transfer in human BM.  Further models that account for the BM heterogeneity under normal and pathological (Sickle Cell Disease) conditions have also been developed. In addition, work has been carried out to capture the realistic nature of the blood flow within the BM and its subsequent oxygen transport process.  As a result the fluid dynamical contributions within this work are significant; where we not only describe a multi-fluid model to represent the blood flow within the BM intra-vascular space, but we also introduce population balance to account for the aggregation and the breakage of the blood cells while flowing through these complex structures. These are subsequently combined with oxygen transport for a fuller description of oxygen transport under normal BM conditions. The development of such physiologically relevant models for oxygen tension distribution in the human BM, could offers numerous clinical/medical applications including understanding of the effects of oxygen tension on drug efficacy (chemotherapy) to the haematopoietic compartment, understanding of the physiological mechanism of oxygen transport in the modulation of normal and leukaemic bone marrow, and assisting in the reconstitution of ex vivo bone marrow engineering constructs.

Microgravity bioreactors such as the High Aspect Ratio Vessel (HARV), and the Random Positioning Machine (RPM), provide an environment where mammalian cells maybe cultured in 3D for tissue engineering applications.  The tissue engineering application of this project is the expansion of Embryonic Stem Cells (ESCs).  ESCs are of interest to tissue engineers because they posses the properties of pluripotency, and indefinite self-renewal.  Initially, the cells are expanded to obtain the desired cell numbers, and are then differentiated into the specific cell type.  The ESCs are encapsulated within porous beads that are composed of alginate (a polysaccharide found in seaweed), and cultured within the microgravity bioreactors.  In order to expand the cells, a cytokine, Leukaemia Inhibitory Factor (LIF) is present in the medium at the beginning of the culture period.  The purpose of this project is to gain an insight into the maximum alginate bead volume fraction (i.e. number of beads and bead diameter) that may occupy the vessel, by studying the motion of the beads and fluid inside the bioreactors, and studying the mass transfer of LIF into the beads.  This will be achieved by modelling: the motion of the fluid and particles (beads), and the mass transfer of LIF using the commercial computational fluid dynamics software ANSYS CFX.  The fluid and particle motion will be validated by experimentally visualising the motion of the particles and the fluid.

Polymers are widely used for technical products due to their flexibility, ease of manufacturing, and low cost. However, their surface chemistry and properties often do not meet the demands regarding wettability, bio-reactivity, biocompatibility and adhesion with biological material. In this study, we have selected six of the most common polymers that have been used for the fabrication of polymer scaffolds namely: PDLLA, PLGA, PS, PMMA, PU and PCL. Zeta-potential and contact angle measurements were used to assess the wettability and surface chemistry of the polymer constructs. Measurements were also carried out concurrently on polymer films as control.  Scanning electron microscopy (SEM) together with gas adsorption technique (BET) were also utilised to observe the physical properties of the scaffolds.

Plasma containing electrons, ions, radicals, and neutral molecules strongly interact with polymer surfaces, resulting in chemical and physical modification on the surface. In this study, surface modification of polymer constructs was carried out using either low-pressure or atmospheric plasma to etch, cross-link or activate the polymer surfaces, modifying their surface chemistry. The chemical structure and charge properties of the treated polymer constructs were characterised using X-ray Photoelectron Spectroscopy (XPS) along side zeta-potential measurements, respectively. The effect of chemical structure and surface charge on wettability was studied by the contact angle measurements. To support the application of the treated polymer constructs for tissue engineering, further we studied the enhanced surface coating of the treated polymers with Extra-Cellular Matrix (ECM) protein, bovine collagen type I, prior to cell seeding.

The ultimate goal of this project is the evaluation and modification of these scaffolds for the culture of human cord blood cells with the aim of optimising 3-D cord blood culture.  The clinical application would be in expansion of cord blood stem cells for use in bone marrow transplantation.

Rational Design of Surface Through the Quantification of Adhesion: Controlling Cellular Behaviour for Tissue Engineering Applications

Recent developments in tissue engineering involve growing cells on functionalised scaffolds to form specific tissues that simulate the complex structures and physiological behaviour of their natural counterparts. To achieve this goal, it is essential that the scaffolds employed have the desired bio-mimetic properties for controlling cell behaviour such as proliferation, differentiation, and cell death. Adhesion of cells to scaffolds plays a critical role in modulating these cellular functions, especially initially during seeding. Thus a rigorous understanding of how the scaffold surface properties affect cell-scaffold interactions will be crucial to the future advance in tissue engineering. This project aims to address the above issue by using an integrated AFM/FM (Atomic Force Microscopy/Fluorescence Microscopy) technique to quantify and elucidate the cell-substrate interactions and associated cell behaviour in relation to scaffold surface properties and patterning, thus enabling the rational design of scaffold properties. In this study, various types of tissue regenerating cells (e.g. fibroblasts, osteoblasts, chondrocytes, neural, and endothelial cells) and tissue engineering substrates (e.g. polystyrene, polyurethane, poly-lactic acid, poly-glycolic-co-lactic acid and polycaprolactone) will be investigated; while the substrate surface modification will be carried out using techniques such as plasma treatment, ion irradiation treatment or chemical vapour deposition method to facilitate the coupling of ECM proteins and/or growth factors onto the substrate surface.