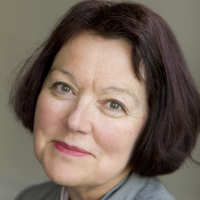 Christina Shewell MA, FRCSLT, ADVS  has worked for many years as speech and language therapist, qualified voice teacher and communication skills coach in the business world. She holds an honorary senior lectureship at University College London, where she taught voice and counselling skills, and she remains particularly interested in the link between voice, emotion, brain and body. She was a member of staff for six years at the Guildhall School of Music and Drama, as voice teacher to acting students and spoken voice consultant to the singing courses. Christina’s clinical voice work has been in both the NHS and private practice. She has spoken extensively at conferences, and trained voice practitioners both nationally and internationally, including a five-city tour of Australia, and courses in India, Canada and the United States. Christina’s book, ‘Voice Work: Art and Science in Changing Voices’ (2009), addresses voice work along the continuum of normal-abnormal voice, in singing, spoken voice coaching and voice pathology, and is widely used

Mr Guri Sandhu MBBS, MD, FRCS, FRCS (ORL-HNS) is a Consultant Otolaryngologist and Head & Neck Surgeon at Imperial College, The Royal Brompton and University College Hospitals in London. He is an Honorary Senior Lecturer at Imperial College and University College London. Mr Sandhu graduated from the University of London in 1990. He obtained the Intercollegiate Fellowship in Otolaryngology (FRCS ORL-HNS) in 2001 and a Doctorate of Medicine (MD) in 2011. Mr Sandhu has over 100 peer reviewed research publications and has written 15 book chapters and 2 books.  He lectures nationally and internationally and has an active research programme in laryngology.

Mr Sandhu is a Laryngologist with a special interest in laryngotracheal stenosis but also manages voice and swallowing disorders. He has experience in performing the full spectrum of endoscopic and open laryngeal procedures, many of which he has pioneered himself.

Mr Sandhu is ENT surgeon to the Royal Society of Musicians and he co-founded the British Laryngological Association (BLA).