The role of science and technology in international development 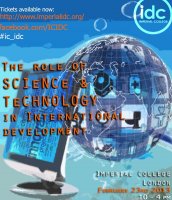 The inaugural Imperial College IDC (IC-IDC) presents the theme The Role of Science and Technology in International Development. The conference aims to inspire action amongst young Imperial College students who are familiar with the field of science and engineering, and to increase awareness of the increasingly important role which innovations play in International Development. With leading figures speaking from across academia and government, it will be an engaging day with thought-provoking discussions and seminars.

Dr Calum Nicholson, a social anthropology and philosophy graduate student at Swansea University, and was previously based at the University of Oxford

Dr Alexander Betts, is University Lecturer (Associate Professor) in Refugee and Forced Migration Studies in the Department of International Development, at the University of Oxford

Dr Allam Ahmed, the Founding President of World Association for Sustainable Development (WASD) and has worked extensively for the World Bank.

Organised by Imperial Hub and tickets need to be bought in advance.