Stuck for inspiration whilst we're all spending a little more time at home? 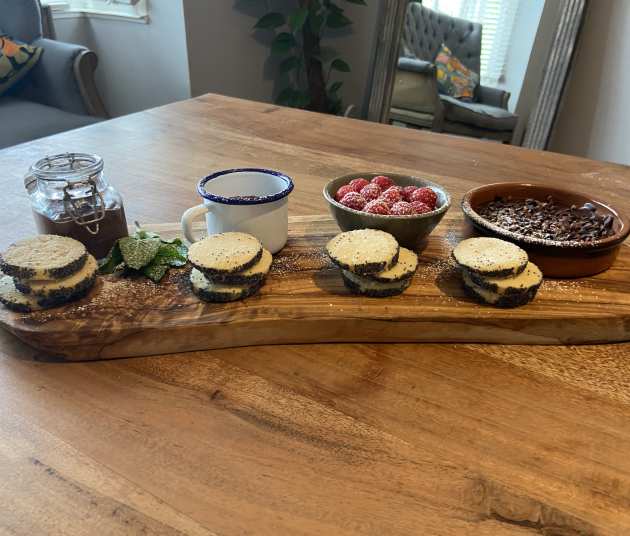 The Catering team are on hand with the Imperial Recipe Club - a regular series of recipes that are designed to let you try new and interesting cooking adventures!

Each month, a member of our Catering team will post a video recipe of one of their favourite dishes for you to try at home.

You can find the complete collection of recipes in full here, for you to follow along with.

Instructions:
1. Break the chocolate into small pieces (1cm approx). Place into a bowl with the vanilla extract.
2. Bring the cream to the boil and pour over the chocolate. Cling film the bowl immediately and leave for 6-7 minutes.
3. Remove the cling film and stir the mixture until glossy and fully incorporated.
4. Divide between your serving dishes and sprinkle on the cacao nibs and raspberries. Place in the refrigerator for at least three hours.

1. Place the butter, sugar, flour & zest in a mixing bowl and mix until a smooth paste is formed. Divide into two equal halves.
2. Double layer cling film 45cm in length x 2.
3. Place the two halves of mixture onto the cling film and make a cylinder shape.
4. Roll the mix tightly up in the cling film and tie both ends. Chill until firm
5. When chilled either freeze one roll or continue with both for extra shortbread biscuits.
6. Remove the cling film and brush the chilled mix with egg mixture and roll in poppy seeds.
7. Cut into 7-10mm discs and place onto an oven tray lined with non-stick baking parchment.
8. Bake at 140C  in a pre-heated oven for 12-15 mins until slightly golden - they will firm up when cooled.
9. Sprinkle shortbread with caster sugar both sides.

Instructions:
1. Dice the vegetables.
2. Place a large 4ltr pot over a medium heat and warm 100ml olive oil.
3. Add the vegetables and cook for around four to six minutes.
4. Add the garlic and oregano and cook for a further two minutes.
5. Stir in the tomato paste & chopped tomatoes and add the vegetable stock .Very gently simmer for 15-20 minutes.
6. Whilst that’s cooking, finely shred the basil.
7. Add the pasta to the soup and cook for a further 8-12 minutes until pasta is cooked - you may need to top up with a little water. Remove from the heat.
8. Add three quarters of the shredded basil, stir and leave to rest for 5 minutes.
9. Add salt & pepper to taste.
10. Serve with bread, parmesan, grilled chorizo and top with shredded basil and a drizzle of olive oil.

Instructions:
1. Place the flour in a mixing bowl and create a well in the middle.
2. Place the salt to one side of the flour and the yeast in the centre.
3. Pour in the warm water and olive oil.
4. Leave for 30-45 minutes until the yeast begins to bubble.
5. Stir the mixture to form a dough.
6. Knead the dough for 8-12 minutes until elastic and pliable. (Don’t add additional flour-it will come together after a few minutes)
7. Place in an oiled bowl covered with cling film and leave to prove until doubled in size. (Time will vary dependant on room temperature)
8. Once doubled in size, knock back the dough and shape to 2cm high.
9. Top with rosemary sprigs, olive oil and black pepper. Leave for a further prove until doubled.
10. After second prove firmly press your fingers down into the loaf and create indentations.
11. Drizzle with olive oil again and cook for 20-25 minutes.

Did you know? Minestrone shows up in cookbooks as far back as 30 AD. However, at its beginnings, there was no prescriptive recipe but rather used whatever vegetable were available - sometimes including beans and pulses. Tomatoes, however, have always formed a key part of its flavour.

Tomatos are a food rarity as they contain more nutritional benefits after cooking. Though the vitamin C is eliminated, cooking substantially raises the levels of beneficial compounds called phytochemicals, including lycopene, the phytochemical that makes tomatoes red.

Straight from the Senior Common Room to your kitchen! This week Tony is recreating a favourite dessert from the SCR: Bread and Butter Pudding.

1. Add all the dried ingredients into a bowl and pour in the milk - mix until fully incorporated.
2. Knead for ten minutes.
3. Place into the loaf tin and allow to prove until doubled in size.
4. Score the loaf and dust with a little flour.
5. Bake in an oven at 200c for 35-40 minutes. It will sound hollow when cooked.
6. Remove from tin and place on a cooling rack.

1. Deseed the vanilla pod and place in a saucepan with the milk and cream.
2. Bring to the boil then take off the heat and leave to steep for 15 minutes.
3. Mix the yolks, sugar and cornflour to a smooth paste.
4. Bring the milk mixture back to the boil and then pour half onto the yolk mixture.
5. Pour the hot yolk and milk mixture into the pan with the remaining milk mixture.
6. Cook on a low heat for 8-12 minutes until it becomes thickened and glossy.
7. Serve with your pudding.

1. Grease the pie dish with butter.
2. Spread the bread with butter then cut into triangles.
3. Layer the dish with bread, sprinkle with cinnamon and sultanas. Repeat another layer.
4. Mix the eggs, yolk, sugar and vanilla extract to a smooth paste.
5. Boil the cream and pour onto the egg mixture and stir thoroughly.
6. Pour egg/milk mix onto the buttered and spiced bread.
7. Grate nutmeg over the pudding and allow to rest for 45minutes.
8. Bake at 160c for 30-30 minutes.
9. Serve with fresh warm custard.

Enjoy! Thank you to Farzana Shakoor and Gwen Mott who requested this week's recipe.

All the components are prepped and when required heated together for a few minutes ready to build the bowl.

For this recipe you will need a medium size pie dish, a tray to toast the bread and some tin foil. Serving vessels.

Once chocolate has cooled enjoy!

1) In a bowl rub the pork ribs with half of the chillies, some dried herbs, salt and pepper. Do the same with Chicken Wings.

2) Next marinate the ribs with honey and BBQ sauce and leave on a side for an hour. Repeat the process with chicken wings but do not use the honey, instead add sweet chilli sauce. Leave both in a fridge for an hour to rest. Later cover with tin foil and bake in the oven in 150 degrees for 2 hours (wings for around 45 minutes).

3) In the meantime peel the potatoes, was them and slice into chips. In a bowl mix oil, salt and pepper and sweet potatoes. Transfer onto a baking tray and bake for 45 minute (same as chicken wings).

For the coleslaw slice the red cabbage, onion and grate the carrots. Mix in a bowl with salt, pepper, dried herbs, mayonnaise and yoghurt.

When time is up, check the meat. It should be tender and fall off the bone with ease.

Plate up with potato chips and coleslaw and enjoy.

1. Break the chocolate into pieces and place in a heavy based saucepan add the butter and condensed milk.
2. On a very low heat (minimum), gently melt the ingredients and stir until fully mixed. This can take around 20 minutes; if it's too hot, it will burn and separate.
3. Add the nuts, cranberries, zest & vanilla and stir until evenly distributed.
4. Spread the mixture into a shallow dish (pie dish/baking tray) approx. 9”x9” lined with baking parchment. and smooth over with the back of a wet spoon.
5. Chill overnight and then top with your chosen items if you decide to.
6. Cut into strips around 2 - 3cm wide and then into squares.

1. Add the sugar, spices, and water to the a pan. Bring to a simmer.
2. Add the peel and juices then simmer for 40 minutes or until reduced by 1/3.
3. Decant into the jar and seal. If it doesn’t all fit, simmer it for a little longer!
4. Store in a fridge until required.

How do I make mulled wine?

1. Soak the rice for 30 minutes in cold water (or wash a few times until the water runs clear). Drain well. Cook the basmati rice according to the packet instructions.

2. Place all the prepared vegetables and the prawns, chicken on a large plate, so everything is ready to add to the wok.

3. Place a large wok over a high heat and add the vegetable oil. Once the oil is hot add in the prawns and fry for 2 mins, then remove the cooked prawns.

4. In the same work fry the chicken until cooked then tip in the carrot, mushrooms, corn and mange tout, give that all a good mix together and cook for 2 minutes while stirring. Next goes in the pak choi, which will wilt down eventually.
Create the base of the sauce by adding the soy, oyster and fish sauces into the wok and give them a good stir. Pour in the cornflour water mixture – this will thicken it all up and result in a glossy, light brown liquid.

5. Turn the heat down to a medium simmer, gently cook for 5 minutes until the corn and carrots are softened, but still retain a slight crunch. Set aside.

6. In the meantime, fry the eggs. Heat the olive oil in a frying pan on a medium-high heat and crack in the eggs, one at a time. Cook for around 4 minutes, taking care not to break the yolks, then turn off the heat and let them sit for 1 minute.

7. Take four medium-sized bowls, one per person, and begin to layer up your magic bowl. First place the fried egg into each bowl, then put the chicken and vegetable mixture into each bowl, divide the rice equally and gently press down so you can’t see any of the chicken mixture.

8. Take a dinner plate and get ready to invert the bowl (this is the trick). Place the plate over the bowl and, holding the plate securely, flip it over (so the bowl is upside down on the plate). Gently lift up the bowl to unveil the bol renversé. Scatter with coriander and enjoy!

1. Whisk the milk and eggs together
2. Gently whisk the egg mixture into the flour in a large mixing bowl
3. Heat a non-stick frying pan to medium heat
4. Add enough oil to cover the base of the pan and, when hot, pour out into a bowl so you can reuse this for your next pancake (this removes any excess oil to ensure there aren't any splashes.)
5. Pour in a spoonful of your mix. No need to be fussy - they'll vary in size.
6. Let the mixture cook until you see bubbles forming - normally 1 - 2 minutes.
7. Flip over and cook for another 45 seconds
8. Add a lemon wedge, sugar, Nutella or whatever

To adapt this recipe for vegetarians or vegans, you could substitute the chicken with aubergine or sweet potato.

1. Slice tofu into 2cm squares and marinate in sweet chilli sauce. Coat in sesame seeds and put on skewers. We recommend soaking the skewers in water before use.

2. Mix vinegar with sugar, and then add sesame oil and olive oil for dressing.

3. Toss all the vegetables together in a bowl and add dressing.

5. Serve with the salad!

1. Pulse flour and butter in a food processor.

3. Tip out onto clean surface and shape into a disc, cling film and put in fridge for 30 minutes.

6. Transer to a round baking tray.

7. Lay the peaches and grapefruit onto top of the pastry.

8. Glaze the edge of the pastry with beaten egg and sprinkle brown sugar onto the fruit.

10. When cooked down, glaze with some peach syrup or jam.