The research within the membrane biophysics group can be broadly split into four main areas: 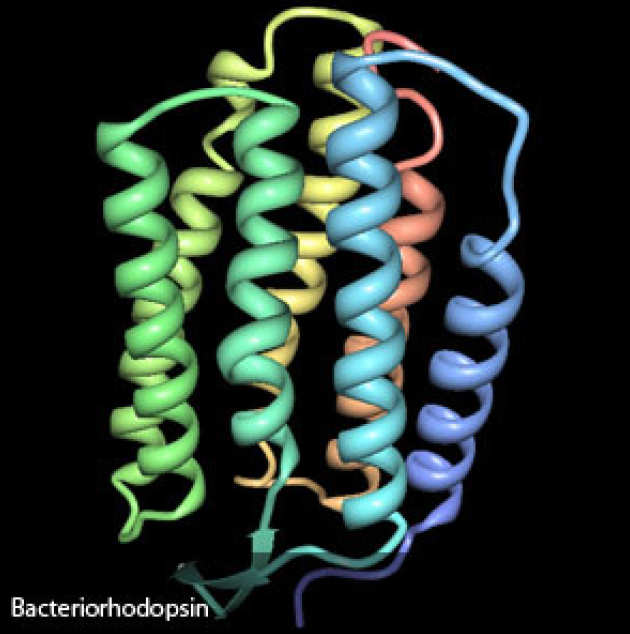 There is now significant evidence that lipid membranes do not form a simple inert sea which holds active proteins but in fact plays an active and highly important biological role itself. With this concept, it is extremely important to study the interactions of these two highly active and coupled membrane components. As well as being important biologically, protein-lipid interactions have attracted significant bio-technical interest for example in in-cubo protein crystallisation.

We have a number of projects looking both at the biological impact of protein-lipid interactions and the process of in-cubo protein crystallisation. Our current projects include studying the action of Soluble N-ethylmaleimide Sensitive Fusion Attachment Proteins Receptors (SNARE) proteins and their interaction with membranes during membrane fusion, inositol phosphate lipid regulation for cell signalling, membrane budding and cellular trafficking control by Rab proteins and lipid transfer by phosphatidylinositol transfer proteins (PITP). We also have a project optimising crystallisation of a number of membrane proteins using different bicontinuous cubic lipid frameworks to form a pseudo-native protein environment (in-cubo crystallisation).

Non-specific binding of drugs to membranes 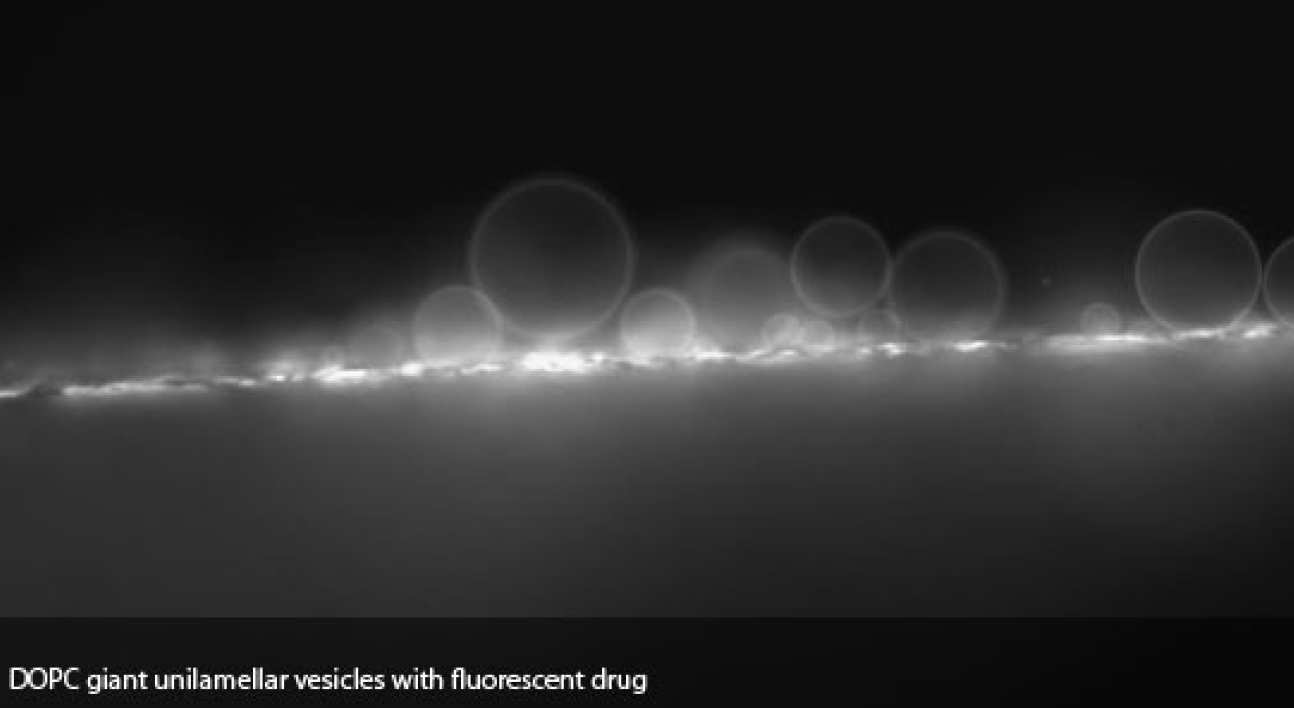 The lack of a systematic method to predict the in-vivo behaviour of drugs based on in-vitro measurements is a major bottleneck in current drug design and development. A particular limitation is that the impact of drug interactions with cell membrane lipids is poorly understood and so has largely been ignored - this is a damaging oversight. Recent in-vitro experimental work in collaboration with GSK plc has shown that drug-lipid chemistry at the plasma membrane correlates strongly with successful transport to sites of action, thus having a major impact upon drug efficacy and dose-response. Our research team identified for the first time that cationic amphiphilic drugs (CADs), the largest class of commercially available drugs, catalyse a reaction that degrades the phospholipid fabric of plasma membranes and do not simply interact passively with cellular membranes as postulated by current drug translocation mechanisms. Even more importantly, we have observed a direct correlation between the ability of CAD molecules to catalyse the breakdown of biological membranes and the specificity and efficiency of the drug in-vivo. This hypothesis may represent a novel drug auto-translocation pathway (Figure 1) which could be used to optimise drug delivery.

The result of this drug catalyzed degradation is that membranes composed of phospholipids such as dioleoylphosphatidylcholine, (DOPC) are broken down releasing lyso-lipids - in the case of DOPC, monooleoylphosphatidylcholine (lyso-PC) and the concomitant fatty acid, oleic acid (OA). Over a wide range of temperatures, DOPC mixed with water will form a fluid lamellar structure. In contrast, lyso-PC forms micellar aggregates with an interface that curves strongly away from the aqueous interface and OA/DOPC mixtures exhibit a strong propensity for interfacial curvature toward the water, forming an inverse hexagonal phase when sufficient OA is present. Lyso-PC is known to separate from DOPC to form micelles when at sufficiently high concentrations and previous experiments have indeed shown that CADs cause the release of lyso-PC leaving OA-enriched DOPC. Incorporation of drug molecules within these micelles and subsequent binding to a different membrane leaflet may result in drug translocation.

Our recent results have also demonstrated that the subsequent rate of membrane hydrolysis is dependent on mechanical properties of the lipid bilayer, such as the stored curvature elastic stress and the surface charge density. The intercalation of CADs between stressed membrane components can relieve the stored curvature elastic stress within the membrane and is thus associated with a drop in the overall free energy of the system. This promotes drug incorporation, which further increases the rate of membrane degradation.

There is increasing evidence to show that the micro-mechanics and energetics of lipid structures play an important role in the control and functionality of proteins, peptides, channels and receptors which are embedded within them. We have a wide range of projects in this area using several different approchaes ranging from novel equipment development to computational simulation. Details of some of our work in this area are below.

All lipids have a natural prefered curvature based on their head group to tail group size ratio. If a lipid is constrained to a flat bilayer, it will have stored energy, known as curvature elastic stress. This stored energy is a feature which nature may exploit to control phosphatidylcholine (PC) lipid biosynthesis. PC lipids have an extremely well matched head group and tail group size and hence increasing their concentration in a membrane will tend to reduce its stored curvature elastic stress. PC synthesis is controlled via a number of enzymes, including amphiphilic CCT. This enzyme is only active, an so PC is only produced, when its bound to a membrane and by binding, we have shown that it relieves curvature elastic stress within that membrane. This binding becomes energetically unfavourable when the PC concentration increases and hence CCT unbinds, becomes inactive and PC synthesis stops. This may represent an important, purely physico-chemical feedback mechanism in PC synthesis.

In addition to simple, well known lipid bilayers, there are several other lipid mesophases which may play an important role in membrane behaviour and function. The inverse hexagonal and inverse bicontinuous cubic phases show an interesting geometric problem known as chain packing frustration, where lipid chains must adopt different conformations in different areas of the structure. By modelling the packing frustration in different inverse biocontinuous cubic phases we have been able to show that these structures are not degenerate as would be expected from the shape of their underlying surfaces which sit at the middle of the bilayer structure.

The bending and elastic rigidity of membranes is thought to significantly influence the formation of inter-cell connections and particularly synapse formation between target and natural killer cells (NK synapses) which are key to normal programmed death of cells. Problems in NK synapse formation can lead to cells not being killed and so to uncontrolled growth. We have developed and now investigate this using a bio-mechanical microscope system which can probe the bending rigidity and elastic modulus of both model membrane vesicles and live cells. This project is a collaboration with the University of Warwick who will use physical cell data with other experimental data to build an accurate model of NK synapse formation.

Lipid polymorphism and out of equilibrium behaviour 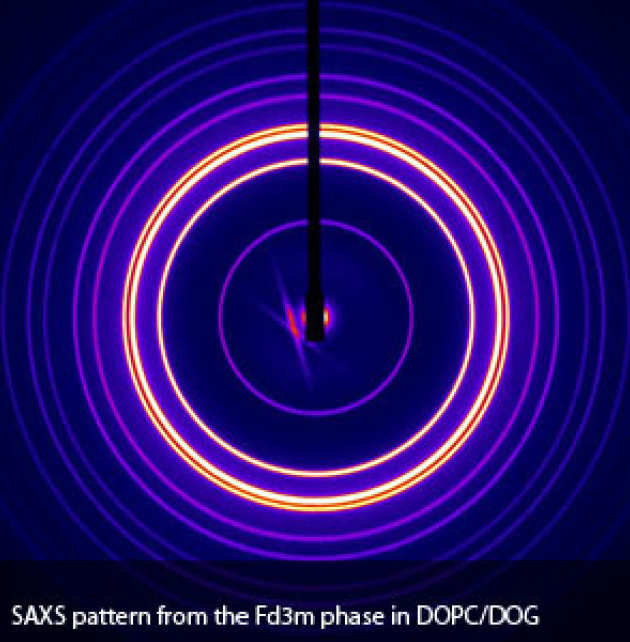 All biological lipids have water soluble (hydrophilic) and water in-soluble (hydrophobic) regions within the same molecule. When they are mixed with water, this causes them to self-assemble into a wide variety of lyotropic liquid crystalline structures. The most commonly observed structure is the fluid lamellar phase which consists of a periodic stack of lipid bilayers separated by water channels. It is this phase that forms the basic building block of all biological membranes. More complex structures such as the hexagonal, micellar cubic and bicontinous cubic phases with order in more than one dimension can also be formed under suitable conditions. The inverse bicontinuous cubic phases are particularly interesting, consisting of bilayers draped over primitive (P), double diamond (D) and gyroid (G) periodic minimal surfaces.

A significant amount of our work involves studying the equilibrium lyotropic phase behaviour of various biological lipid systems to gain an understanding of their behaviour and function in living cell membranes. Using a combination of small and wide angle X-ray diffraction, NMR and calorimetry, we have made a substantial amount of progress in this area but it is also extremely important to study the kinetics and mechanisms of transitions between these phases. Fundamental biological processes such as membrane fusion are thought to begin with formation of a fusion neck between two flat bilayers and the structure of this neck is closely related to features observed on forming the bicontinuous cubic mesophase. As such, the transition between lamellar and bicontiuous cubic lipid structures is an excellent model for investigating possible intermediates and energetics of biological membrane fusion.

Lyotropic phase transitions tend to occur quickly, often occuring on the second or even milisecond time scale. Time resolved X-ray diffraction is an ideal technique for studying structural evolution in these systems but there are two methods that the transitions can be triggered. For investigating relatively slow transitions, temperature jumps can be used and we have developed a novel high intensity 'T-jump' X-ray beamline to allow us to study these transitions in the lab. For faster transitions, pressure can be used to trigger the structural change. The 'p-jump' technique has several advantages over temperature jumps:

To capture diffraction patterns at sufficient frequency (often up to 5 frames per second), high intensity synchrotron X-rays are used.

We are currently developing a new pressure jump system in collaboration with beamline I22 at Diamond Light Source, the new UK synchrotron. When finished, this system will become a user facility based at I22, opening up the pressure jump technique to a far larger community than currently have access to this highly advantageous technique.

For more information, please contact one of the Group Leaders: