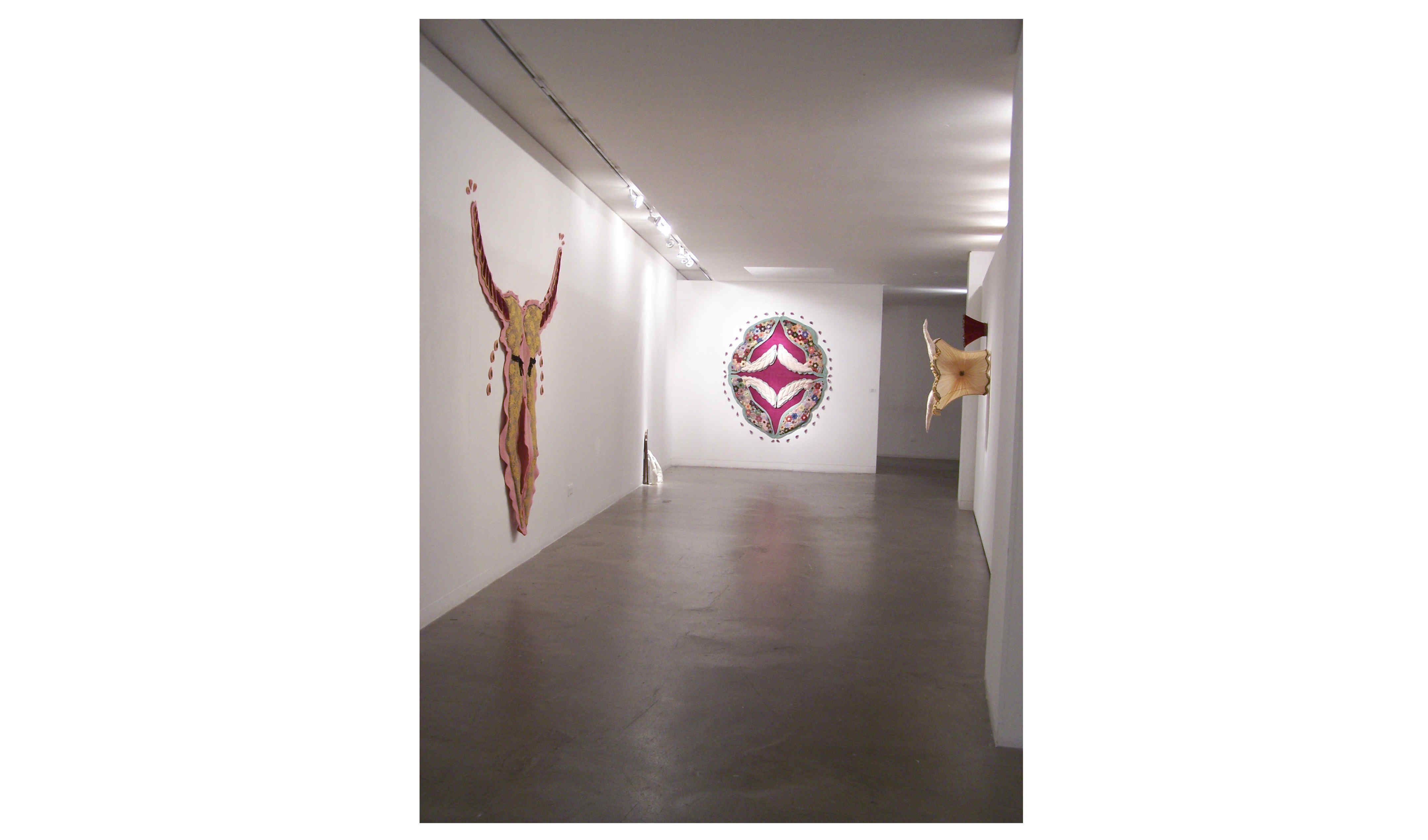 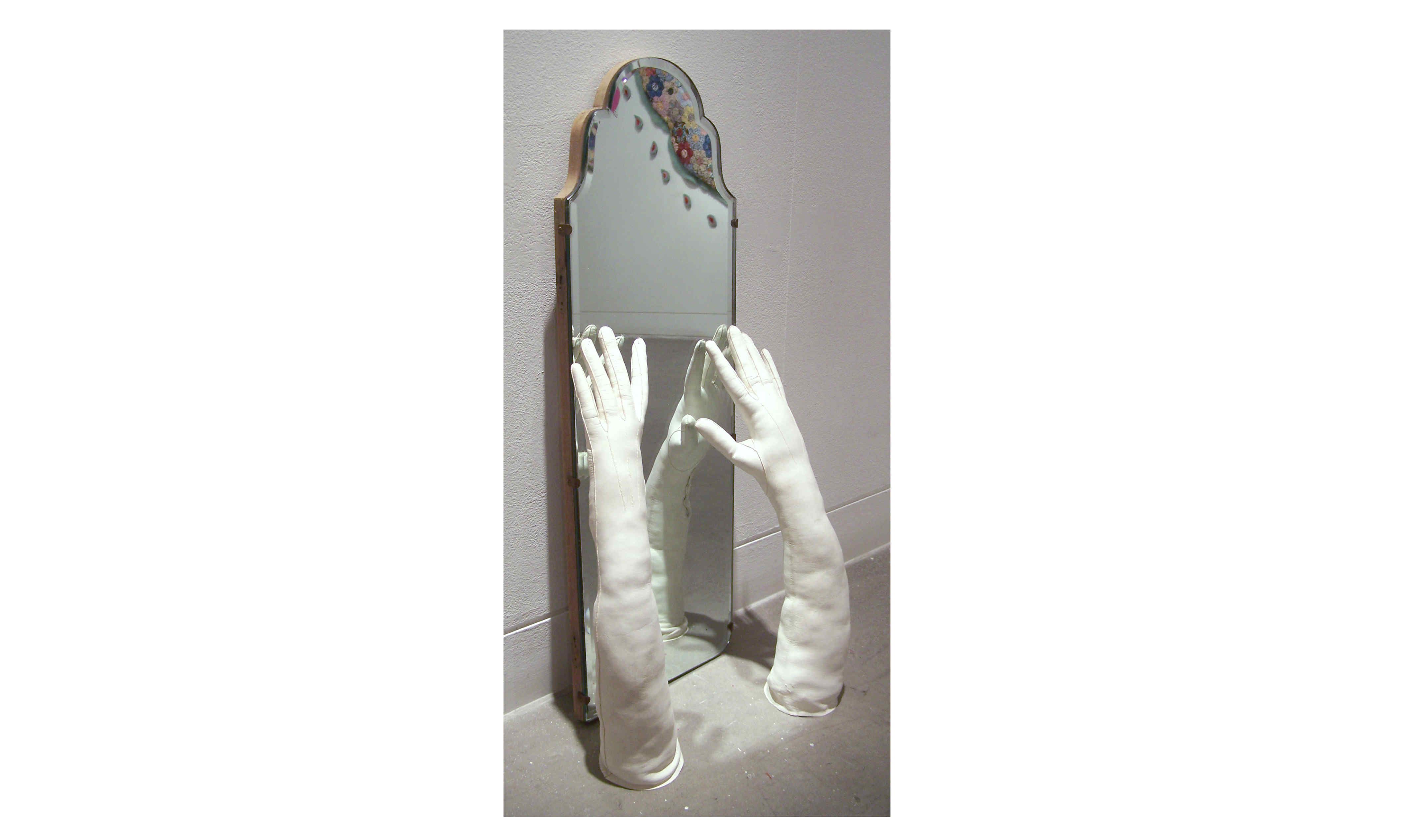 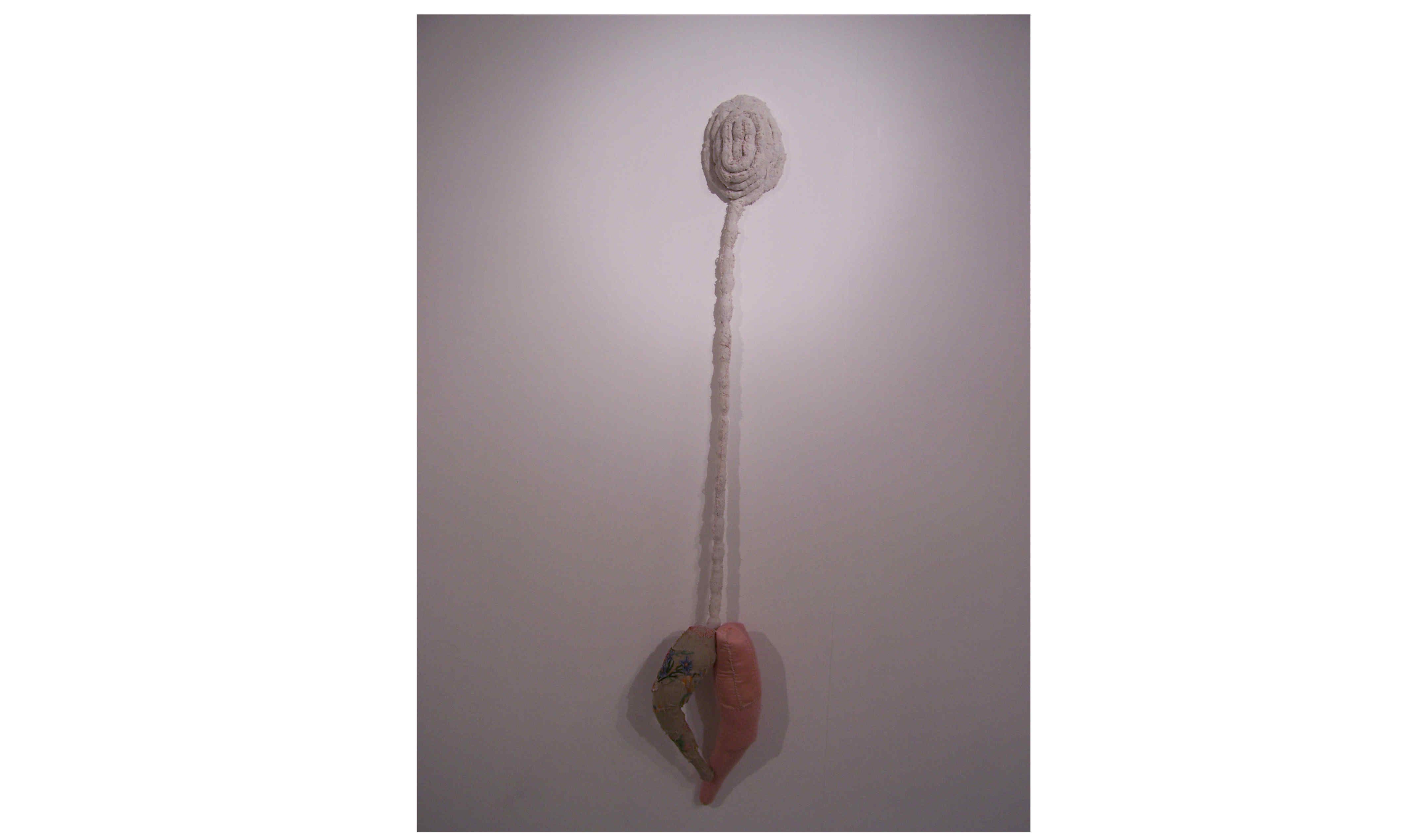 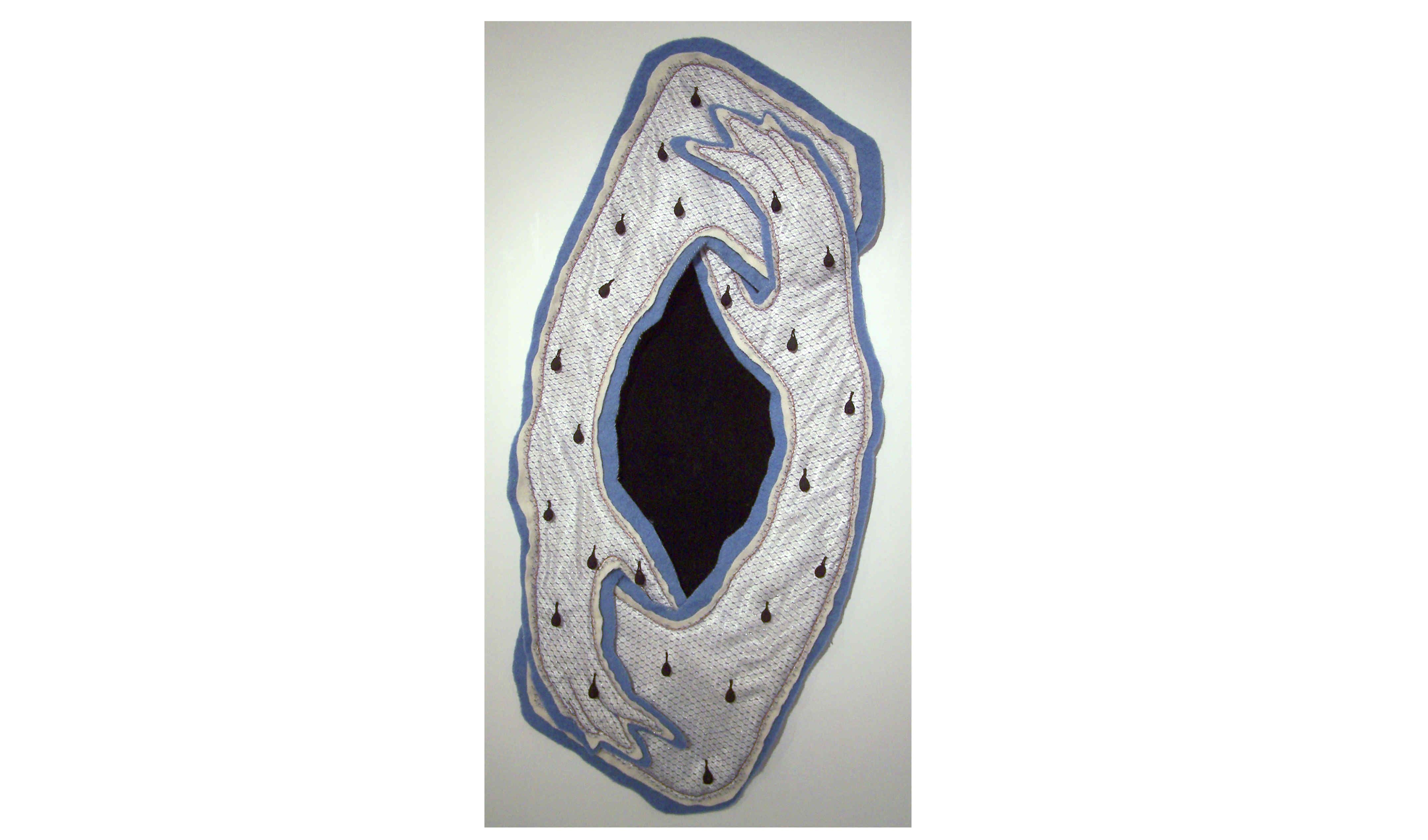 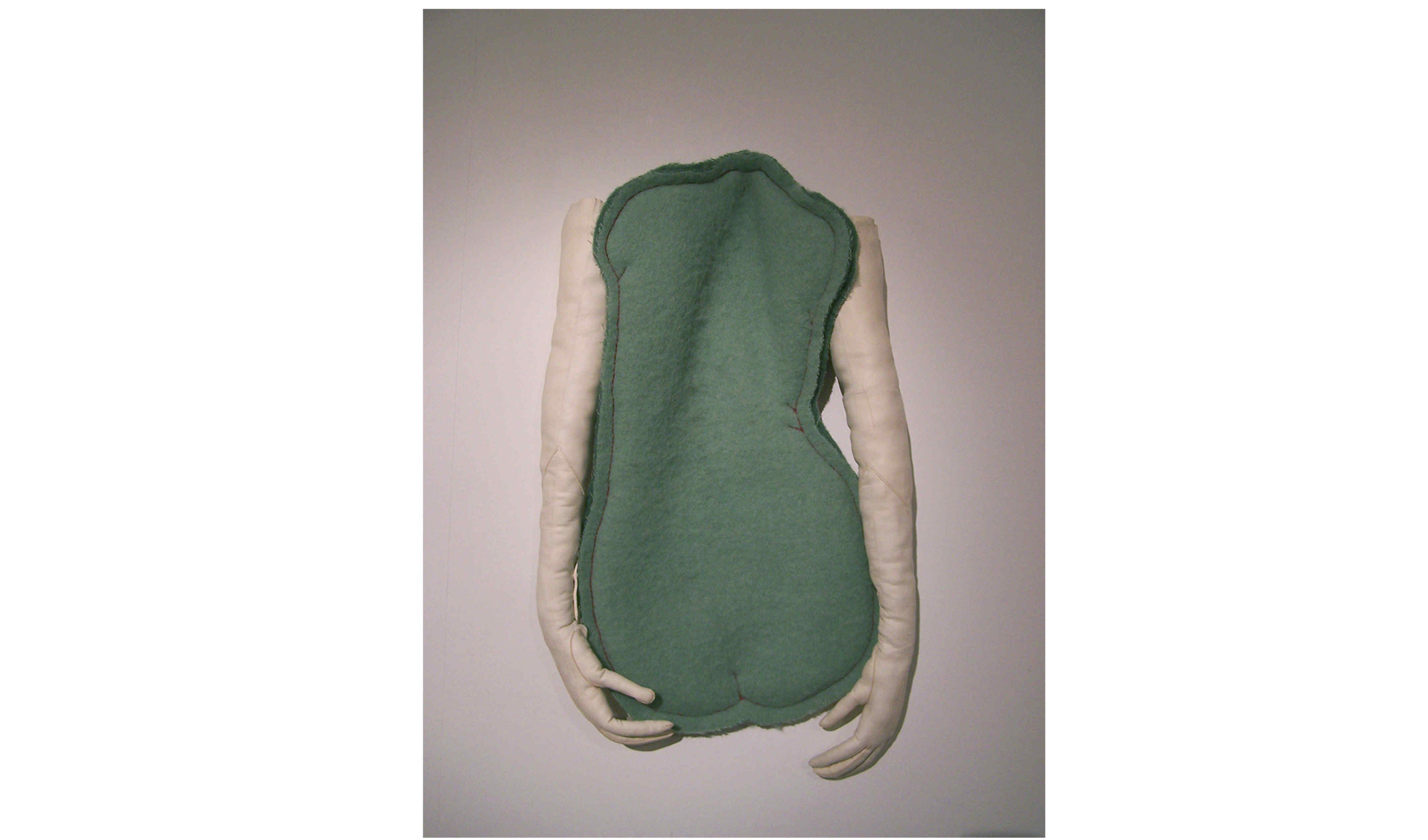 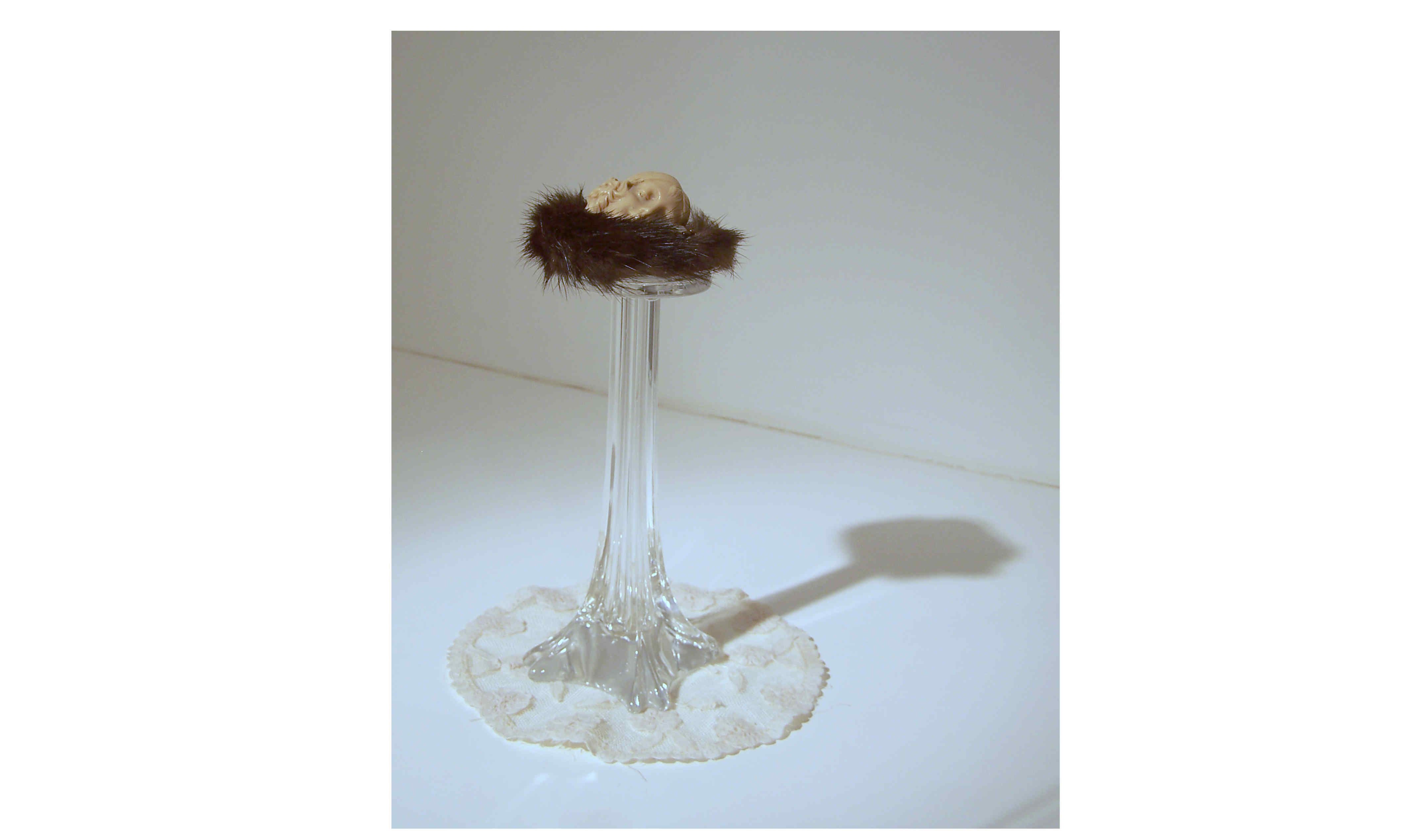 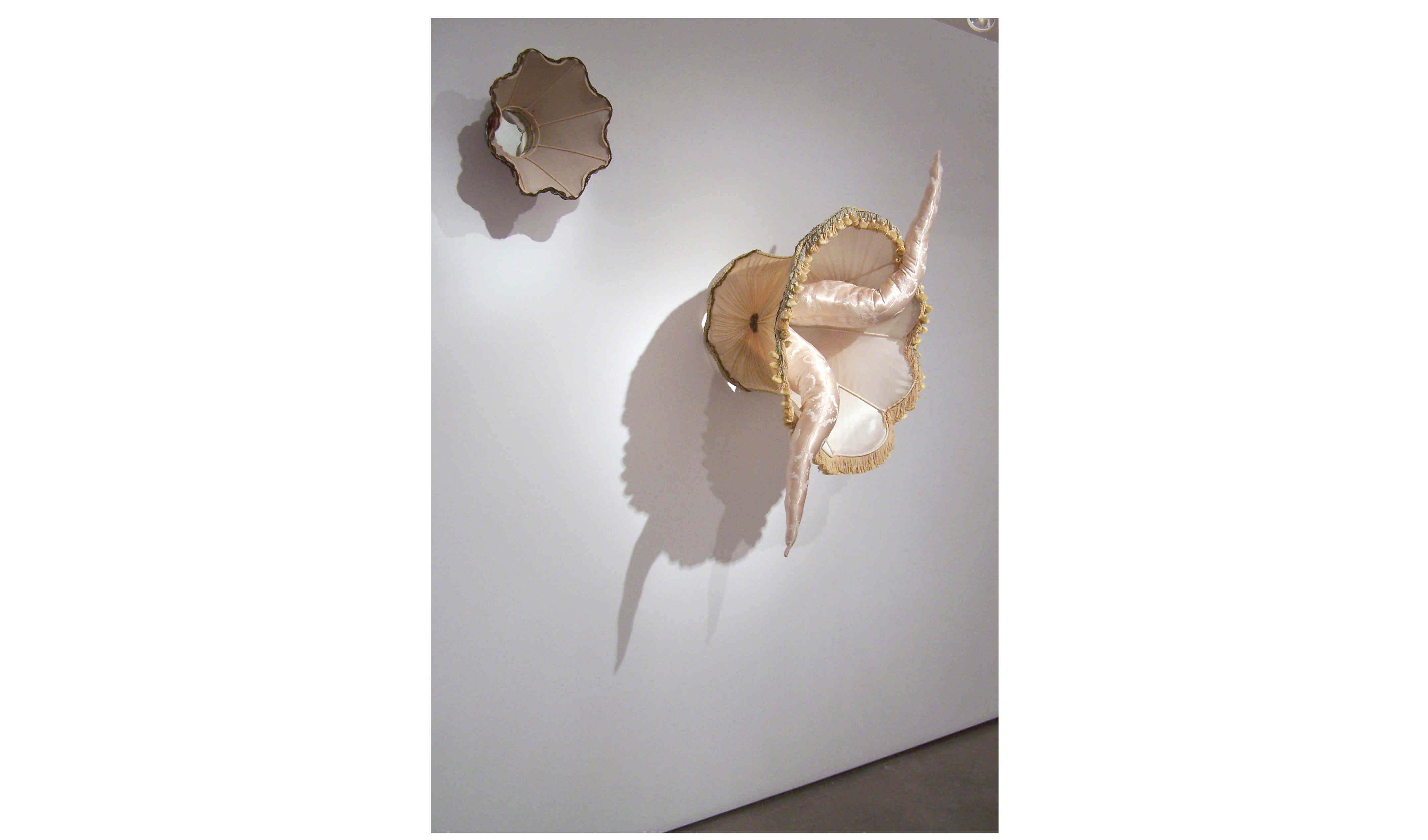 Gillham’s current installation of quilted wall hangings display stylized mirrored female figures that are inspired by mythological and archetypal women. They reflect some of the concerns that occupied a celebratory strand of feminism associated with the ‘traditional’ feminine crafts like those Judy Chicago promoted with her celebrated The Dinner Party ‘ (1974-1979) shown in London in 1984. Like Chicago, Gillham uses vaginal or "central core" imagery, as it came to be called, as a significant feature of her work. Her use of vaginal imagery should not be read literally, but metaphorically, as an active and powerful symbol of female identity whilst at the same time exploring her own fantasies and desires. Such fantasies are expressed through quilted combinations of found and new textiles, wool blankets, eiderdowns, clothing and vibrant lace and velvet. Like Chicago, Gillham references ‘Snake’ (Early Aegean, Minoan-Bronze Age, Late Minoan I Period, about 1600-1500) and Sheela na gigs figurative carvings of naked women displaying an exaggerated vulva.

Gillham’s women in her work are abstracted but inspired by goddesses, symbols of female power and beauty from early fertility figures found in churches such as Shelah-na-gig, found in Irish, Saxon and Norman churches, but she reworks them through Baroque style and the rich decorative interiors and furniture of the 18th and 19th century. Her love and excitement of the many visits to palaces and rich interiors in the UK, France and Spain she visited as a child have served her well. The Baroque, with its eccentric redundancy and noisy abundance of details, appeals to all the senses denying any pejorative description of works of art, craft, or design that were once thought to have excessive ornamentation or complexity of line. Greenberg’s denial of the decorative in painting is doubly denied in Gillham’s love of exuberant and sculptural forms. For the more that modernist painting pushed back the conventions of its medium towards a monochromatic flatness, the closer it became to resembling a blank or empty canvas. Alongside Robert Morris, a favourite artist of Gillham, elements of painting and sculpture combined to create hybrid objects. These were named as ‘primary structures’, or ‘specific objects’. The move between one practice and another is best exemplified, I think, by Rosalind Krauss’ proposition, in her key essay from the 1979, that the production of hybrid forms and objects - neither belonging to one thing or another- blurs and disturbs categories of art practice1. She concludes that practice is not defined in relation to any one medium but in the logical operation on a set of terms, for which any practice might be used. In Gillham’s work, whether assembled from ready-made lampshades and cloths’ patterned surfaces, each form grows and flows one into the other in a spellbinding frenzy that draws us into physical exhaustion and play which contrasts the clear and sober rationality of Greenberg’s dictum for painting’s propriety.

Empowered through the hybridic construction of her objects, Gillham’s voluptuous ‘Open Wide Blanket’, for example, is constructed of velvet, patchwork quilt, hand embroidery (2011) and reminds us that material and fibre are forms of matter that abound in references to the body. In her work the body becomes a tool (as well as her materials) for its transformation and this propels us, as viewers, to reflect on the body of the work as well as our own bodies, as essential to the making of meaning through form. The relationship of art to the world exists on altered terms. If at what time, modernists used abstraction to transcend everyday life, a new generation of artists enacts or performs painting and sculpture through an awkward but knowing deployment of textile processes. So what is the viewer or this writer left with? The creation of hybrid objects offer an inventive rethinking of the conceptual frameworks, categories and practices that determine discussion around the status and interpretation of modernist abstraction and ‘traditional’ feminine crafts, not quite this and not quite that but always engaging the possibility of experiencing materials anew. Through the experience of the active body in encounter with the physical, something else begins to happen with affectionate pleasure and intensities of looking. 'I wonder if I've been changed in the night? Let me think: was I the same when I got up this morning? I almost think I can remember feeling a little different. But if I'm not the same, the next question is 'Who in the world am I?' Ah, that's the great puzzle!'" 2

Janis Jefferies is an artist, writer, curator and Professor of Visual Arts in the Department of Computing, Goldsmiths University of London