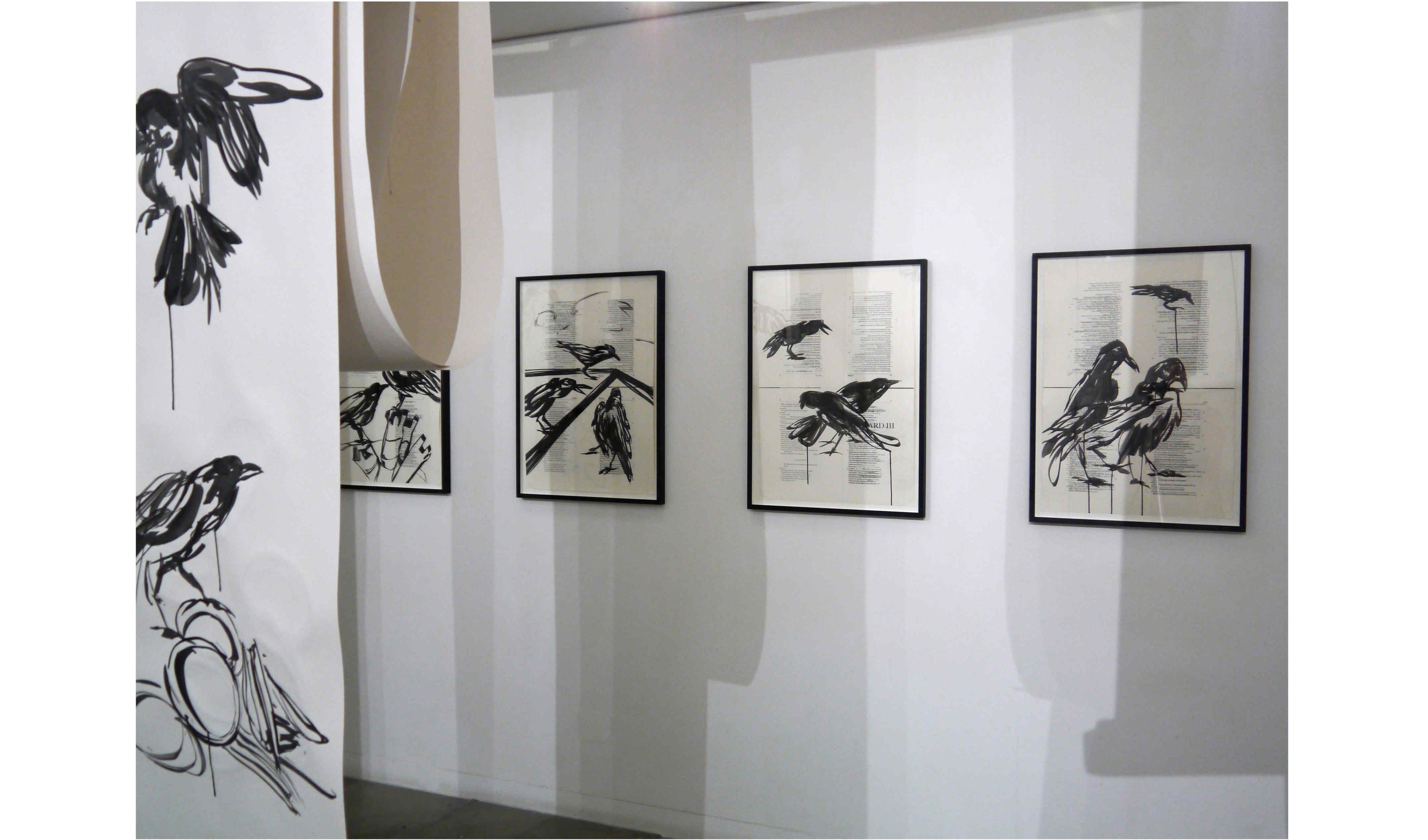 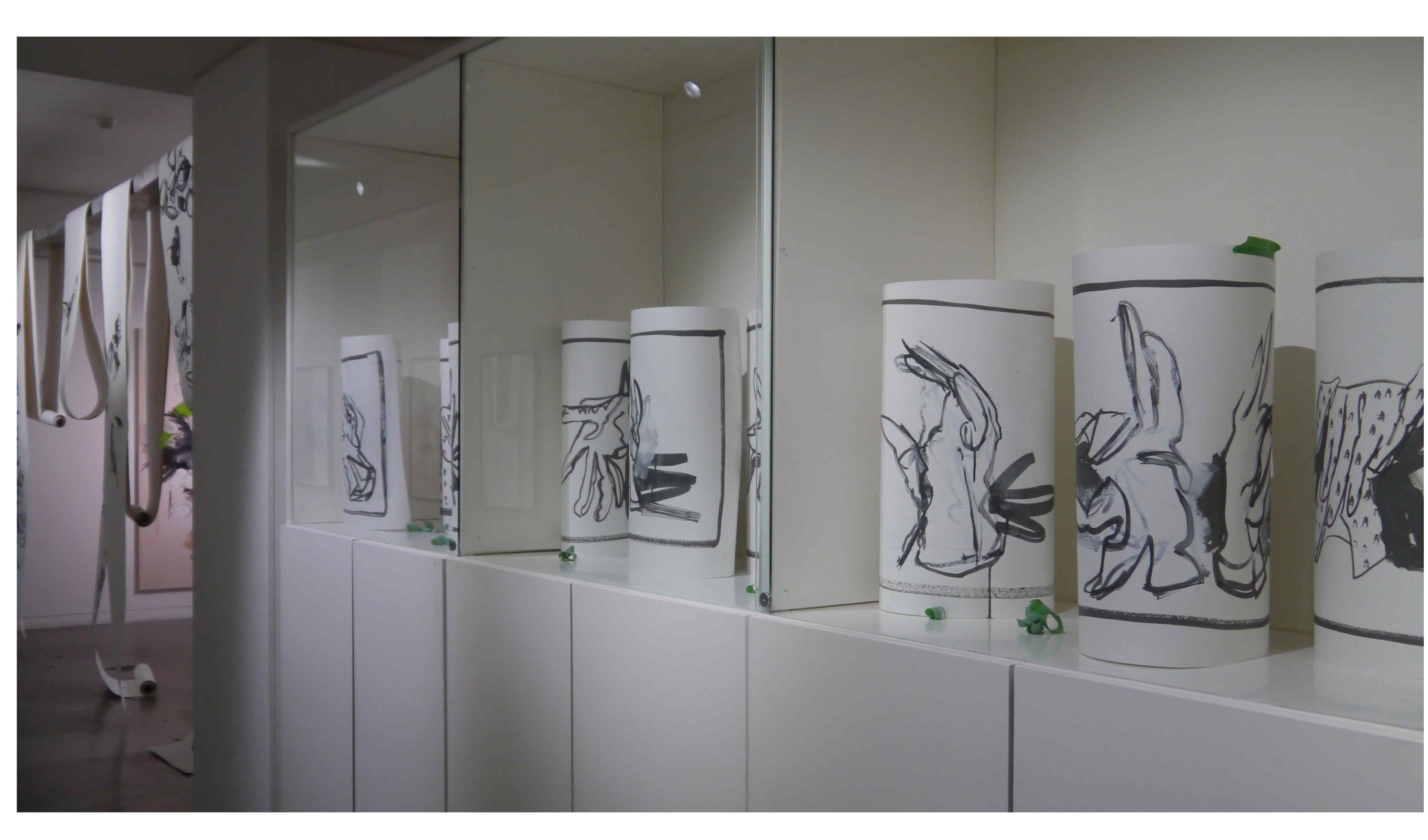 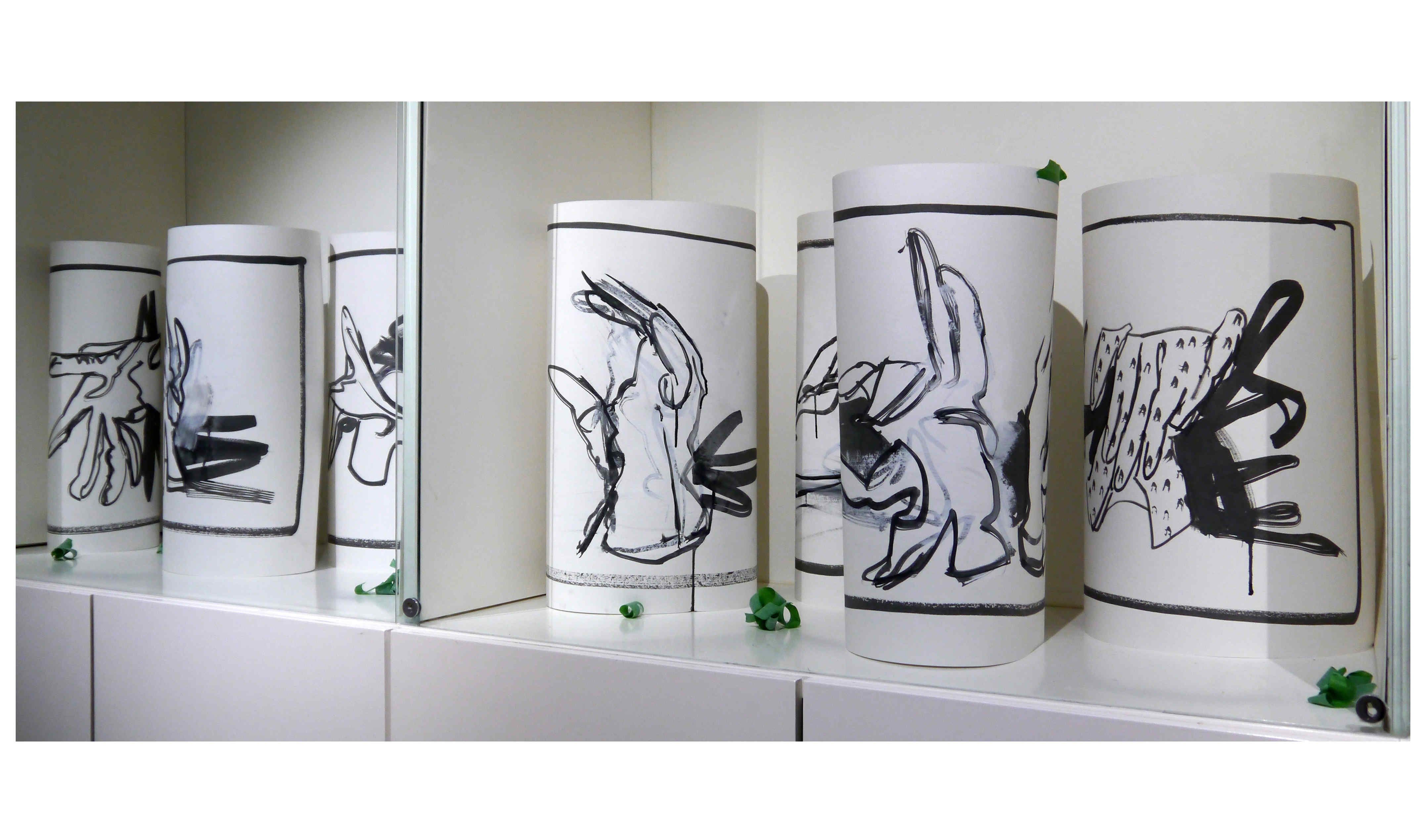 The birds have made an almighty mess. They’ve emptied the canteen bin and colonised the contents. Leaning towers of green Styrofoam cups and cardboard rolls lurch towards the floor, toppled by a crow’s wing. Beaks jab at the white plastic lids strewn on the ground. A winding strip of yellow and black hazard tape holds this chaos together, but only in the most perfunctory way. The crows are making a mockery of its meaning.

Susan Sluglett likes a good story, and there is one behind every painting. These works were made in response to a three-month residency at Borough Road Gallery, part of London South Bank University. The paintings of the birds came about after a visit to the building’s top floor studio, a space once occupied by the British modernist David Bomberg. When Sluglett first entered the room, crows were clattering on the glass roof and tearing up wastepaper on the balcony. The poet and lecturer Karlien van den Beukel described the birds as the trace of Bomberg, as they would have been causing similar mayhem in his day too.

This was the start of a prolonged period of investigation for Sluglett into the Borough Group. Dennis Creffield, Cliff Holden, Dorothy Mead, Miles Richmond and Edna Mann were an alliance of young, idealistic artists operating in the post-war period. Lead by their teacher, the troubled and uncompromising Bomberg, the group sought to bring about a renaissance in British painting, championing raw emotion over literal representation. Bomberg had never really recovered from the horrors of the First World War. The vibrancy of his pre-war paintings gave way to frenzied, oleaginous landscapes, as if he was unable to extract himself from the quagmire of Flanders. For Bomberg, painting was about finding the real essence of a work of art. His students were devoted to him; Frank Auerbach described him as “probably the most original, stubborn, radical intelligence that was to be found in art schools.”

The provincialism of the British art establishment in the late 1940s and early 1950s did little to aid Bomberg’s visionary ideas, and the Borough Group faced constant disparagement for their, seemingly, rough and ready approach. Sluglett’s crows, painted in a similarly urgent way, personify that tenacious rebelliousness in Bomberg, while also operating as a prophetic symbol of the group’s untimely demise. Many of the Borough Group struggled for recognition in their lifetimes, including Bomberg, who died virtually destitute in the late 1950s.

Dorothy Mead, although an influence on many artists and being the first female President of The London Group, had faced criticism for her muddy palette - something, she argued was due to white paint being very expensive - according to her sister Val it was a regular request on her Christmas list. During the residency, Sluglett decided to gift Mead a pair of white leather Victorian gloves in a series of paintings called ‘For Dorothy’. There is something incorporeal about these pictures. Set against a white background, the fingers perform odd, floppy contortions, as if they have been possessed. They are almost cartoonish, like Mickey Mouse’s gloves in Disney’s Fantasia and echo the lively animation of Mead’s own paintings.

Sluglett is also an expressive painter. An artist known for her expediency, she paints quickly, the subject matter guiding the emotional intensity of the paint. An upside-down wedding bouquet is rendered in a splatter of oil paint, as if it had been slammed to the ground in a fury of tears and shattered dreams. The detritus of a debauched night out is expressed in wild sloppy brushstrokes, oily dribbles the consistency of sweat and semen running down the canvas. Yet Sluglett’s frenetic execution is underpinned by great technical detail. Having trained as a graphic designer before becoming an artist, Sluglett has an intuitive understanding of composition.

The subject matter of her paintings is invariably a combination of historical research and found, or made objects. In this instance, the tottering stacks of paper cups and cardboard rolls featured in the painting ‘Parliament II’, were the remnants of a cathedral she created out of canteen detritus. The sculpture was made in homage to the Borough Group artist Dennis Creffield, who was commissioned by the Arts Council in 1987 to draw every medieval cathedral in England, resulting in an exhibition at the Camden Arts Centre.

Sluglett’s desire to build something three-dimensional before starting a series of paintings has often puzzled her. As if the construction of the image needs to be felt before it can be depicted. She rarely shows these objects, believing it dilutes the power of the final paintings, yet they are integral to her practice. In many ways she could be described as an old-fashioned still life painter, and certainly the recent painting ‘Decoy’ depicting a dropped bouquet was a personal challenge to, in her words ‘attempt a bunch of flowers’. There will always be great inventiveness in Sluglett’s paintings, as will be seen in her forthcoming show at New Greenham Arts in 2016. Yet at the heart is the need to understand the subjects she paints right down to their DNA