Scientists gathered today to hear the latest results from the world's largest experiment, the Large Hadron Collider (LHC) at CERN

Explore the news about the boson

Newsflash: It's a boson 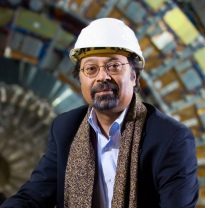 Officials from the research facility, including Imperial College London's Professor Tejinder Virdee, announced they have discovered a new particle that they believe to be the Higgs boson, a result they are tentatively ranking as the most significant scientific achievement of the last forty years.

Researchers from Imperial are amongst those who designed, engineered and built the CMS detector and are now heavily involved in the analysis of data since the 12,500 tonne, 21-metre-long structure began operating in 2009. CMS measures the properties and energies of new particles that are created when protons collide with one another whilst travelling at just under 300 million metres per second around the LHC.

The Higgs boson is believed to convey mass to the fundamental particles that form the building blocks of the universe. Without evidence of its existence, physicists could not fully underpin all the currently held laws that explain the interactions between the Universe's elementary particles. Now these results bring to a close a series of experiments designed to verify its existence, and open a new series of challenges for fundamental physics.

Speaking at special seminars held concurrently at CERN, the home of the LHC in Geneva, the International Conference on High Energy Physics in Melbourne, and a press conference in London, physicists working on the Atlas and the Compact Muon Solenoid (CMS) experiments presented the latest data in their hunt for this obscure Higgs boson.

In December 2011, results from the two particle detectors already appeared to be converging, now new results from both camps have allowed scientists to individually identify a particle they are 99.999 per cent certain to be the Higgs boson. The new particle has a large mass, around 125 times the mass of the proton particle that is used as a standard unit of measure of mass for all particles. The scientists say that more experimentation is needed before it can be fully confirmed all its physical properties can be understood.

In a statement to the media, Professor Virdee said: "Today is a historic day. A new heavy particle, the first of its kind, has been observed in Compact Muon Solenoid. The Higgs boson is the last and key missing element of the highly successful standard model, one of the great achievements of 20th Century science. Within the experimental precision achieved so far the results appear consistent with expectations for a Standard Model Higgs boson, now more data are required to reveal whether it has all the properties of the Standard Model Higgs boson or whether some do not match, implying new physics beyond the Standard Model. It took 20 years to build the Compact Muon Solenoid detector, arguably the most complex scientific instrument ever built. This result is a tribute to the talent and dedication of thousands of scientists and engineers from about 40 countries that built and now operate CMS. I believe this observation opens the door to a new vista of physics that will take many more years to explore.”

Imperial physicists give their reactions

Physicists from Imperial College London gave their reactions to the news as it happened: 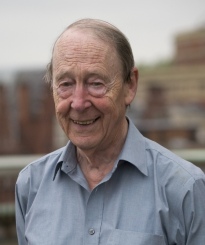 Tom Kibble CBE FRS, Emeritus Professor of Physics at Imperial College London, said: "It is very exciting to find that work I was involved in nearly fifty years ago is once more at the centre of attention.  At the time, the Higgs boson did not seem a very significant feature of the theory, but it has become so as the last missing piece of the 'standard model'.  Its discovery will complete a chapter, but not the story. The model is amazingly successful, but many features remain to be explained."

Professor Jordan Nash, Head of High Energy Physics at Imperial College London, said: "This is fantastic result.  After nearly two decades of careful planning and preparation it is wonderful to see a new chapter in the understanding of the universe being opened.  We are all thrilled to be a part of this discovery and are looking forward with anticipation to studying this new particle and whatever surprises its behaviour may have in store for us."

Professor Jerome Gauntlett, Head of Theoretical Physics at Imperial College London, said: "The discovery of the Higgs boson is a truly great moment for science. Its origins go back to the 1960's with enormous contributions made by Peter Higgs in Edinburgh and by Tom Kibble and Nobel Laureate Abdus Salam at Imperial. It is fantastic moment for British science that 50 years later on we have received such dramatic confirmation of their profound ideas. Like all great discoveries, more detailed studies of the Higgs are likely to have a huge impact on future fundamental scientific enquiry. I expect that they will illuminate the nature of the mysterious Dark Matter that pervades the universe, whethe r or not there a re extra dimensions in addition to the three space dimensions that we observe, and ultim ately how to unify the Standard Model of Particle Physics with Einstein's Theory of Gravity."

Dr David Colling, Senior Lecturer in High Energy Physics at Imperial Colle ge London, said: "This is a fantastic technical achievement. Every aspect of the system from the accelerator to all of the incredibly complicated detector components and the world wide computing grid which has analysed the data have worked incredibly well. What we have observed is a new particle which is consistent with being the famous Higgs particle of the standard model. The statistics are low and we have to be careful what we claim but there is definitely something there. If it is the Higgs then it is the last remaining element of the Standard Model of Particle Physics, yet it might even turn out to be the first signs of physics beyond the standard model. It is the painstaking work over the next few years to understand what exactly it is that we have found."

Dr Roberto Trotta, Lecturer in Cosmology at Imperial College London, said: "This could be just the first step towards uncovering a completely new layer of reality - the Higgs might lead to the discovery of supersymmetry: the notion that for every known particle there exist a super-particle with a much larger mass. And if supersymmetry is real, then we are on our way to finally crack the mystery of the dark matter in the Universe. Dark matter might be 'the last Highlander' of all supersymmetric particles, the only surviving 'sparticle' from the Big Bang. And we might be on the verge of hunting it down at the LHC."

Tom Kibble talks about the theory behind the boson

In the following video, Emeritus Professor Tom Kibble talks about spontaneous symmetry breaking in quantum field theories, the subject of his 1964 paper that led to speculation about the Higgs boson. Higgs history: watch a timeline of boson theory and discovery at Imperial Tom Kibble: Renaming Higgs boson would be 'silly' Kibble at 80