Wealthy countries that donate expensive medical equipment to low- and middle-income countries may be missing the mark, according to a report.

Adapted from a news release issued by the Lancet

Wealthy countries that make donations of expensive medical equipment to low- and middle-income countries may be missing the mark, according to a report from researchers at Imperial College London.

The study examines how medical technology should best be used to improve health in low- and middle-income countries and found that in many cases medical technology, which is almost exclusively developed in rich countries, is inappropriate for use in poorer nations.

The report was specially commissioned by the Lancet to coincide with the first Global Health Policy Summit, an event which brings together medical researchers, politicians and decision makers from around the world to champion innovative solutions to global health challenges.

“Most health technology is produced by companies from high-income countries for high-income markets. Health technology is therefore mostly designed for an environment with high spending on health, a reliable energy supply and large numbers of trained healthcare professionals,” says co-author Peter Howitt of the Centre of Health Policy, part of the Institute of Global Health Innovation at Imperial College London.

According to hospital inventories, an estimated 40 per cent of healthcare equipment in developing countries is out of service, compared with less than 1 per cent in high-income countries. The inappropriate deployment of medical technologies from wealthy countries plays a major part in this high failure rate, the report suggests.

Instead of relying on hand-me-down technologies from wealthier countries, which can be costly, inappropriate for local conditions and even dangerous, the authors urge a renewed effort towards developing what they call “frugal technologies”. These are cost-effective technologies that are developed specifically to cope in local conditions. Examples include: 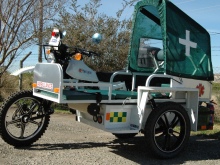 The eRanger, a cheap and durable ambulance designed for poor road surfaces.

The authors argue that advances in technology must also be accompanied by innovation in the way we deliver and pay for healthcare, for example microinsurance schemes, similar to microfinance schemes, where a large number of people pay insurance to fund a local health centre.

Professor The Lord Darzi of Denham, Director of Imperial’s Institute of Global Health and another of the report’s authors, concludes that: “Technology is making a substantial contribution to global health, yet it could do so much more. The benefits of health technology should be available to all, not only those in high-income countries. Access to life-saving health technology should not be restricted to those with the ability to pay. Tackling current market failures is therefore a task for all those with an interest in improving global health."