A College investigation, assisted by the Students' Union, has identified a number of failings at this year's Varsity tournament.

The 2015 Varsity tournament saw women’s rugby take the headline spot for the first time at the Stoop, where a gripping game saw the Imperial College team claim victory over the Medics with a final score of 15-12.

It is unacceptable that talented women in our community have been made to feel like second-class citizens.

However, a series of incidents at the event on 18 March led to complaints from the Women’s Rugby Club. They raised concerns about the organisation of the event, particularly the transport arrangements and the post-match communications, and the conduct of staff involved. They also felt that they had not been given the same level of consideration as their male counterparts.

Following the complaints, Imperial’s President Professor Alice Gast announced an investigation into the circumstances surrounding the event. In a letter to the Club, she said: “We wanted to let you know how very sorry we are that your experience at this year’s Varsity fell so far short of the standards all of us would expect.  It is unacceptable that talented women in our community have been made to feel like second-class citizens.”

The investigation was conducted by Jane Neary, Director of Campus Services, and Kani Kamara, Equality and Diversity Manager, and was assisted by members of Imperial College Union including Deputy Presidents Abigail de Bruin and Chris Kaye.

Their findings upheld or partially upheld all of the complaints made by the Club, with the exception of allegations of misogynistic or sexist language being used by Imperial staff – for which no evidence was found. 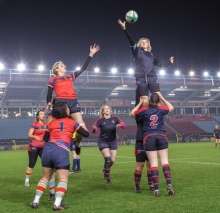 Last week Vice Provost (Education) Debra Humphris; the College’s Chief Financial Officer, Muir Sanderson; the President of Imperial College Union Tom Wheeler and members of the investigation panel Jane Neary and Kani Kamara met with Mona Theodoraki, Captain of the Club, to share the findings of the investigation, as well as to offer the College’s and Sport Imperial’s apologies for the poor planning of the event and the effect that this had on the experience of the female athletes. Individuals whose actions were judged inappropriate are also making their apologies to those affected.

Neil Mosley, Head of Sport Imperial, said: “Everyone involved in organising Varsity is deeply sorry that the experience at the evening showcase fell so short of what the athletes and attendees deserved, particularly for the Women’s Rugby Club. The investigation has revealed some clear failings and we need to hold up our hands to these and take time to address them properly – we’ll be working closely with students and Imperial College Union as we do this.

“Sport Imperial is very fortunate to work every day with a student community that’s enthusiastic, engaged and diverse in its sporting activities –and we’re proud to provide a team and facilities to support that community. I’m pleased that the investigation’s findings encourage us to explore how we can best support all sport at Imperial and  look forward to collaborating with the Union as we develop a single strategy for sport here"

In addition to the findings the investigation highlighted broader issues relating to the College’s sporting strategy, sexism in sport more generally and excessive alcohol consumption.

Evidence gathered suggested that the intoxication of some students contributed to the logistical difficulties encountered around transport, and presented challenges to the College staff responsible for delivering the event. There were also reports of unacceptable sexist comments directed by male students to the female rugby players and claims that not enough thought was given by staff to preparations for the athletes before the match.

As an institution that strives for excellence, we must take a leading role in moving towards a more mutually respectful community.

Following the investigation’s conclusion, College staff and representatives of Imperial College Union have agreed a number of steps to address these issues. These include further exploring experiences of sexism in sport at Imperial as part of the College’s commitment to inclusiveness, agreeing the values and behaviours that the community would expect from all students and specifically the College’s sporting leaders and changing the format of future Varsity matches. (See side bar for the full list of recommendations).

Professor Humphris said: “It’s clear that Varsity 2015 didn’t reach the high standards our community expects and our athletes deserve. It raised a number of issues that we need to better understand and to take action on in terms of the expectation we have of our community, but it also flagged a much wider problem that goes beyond this university – around cultures and attitudes to women in sport in general. 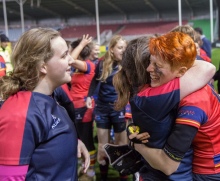 “As an institution that strives for excellence, we must take a leading role in moving towards a more mutually respectful community. These things take time and can be difficult, so it’s important to start now and to start together. I’m very grateful to the staff and students, including Imperial College Union, Sport Imperial and our student athletes, who’ll be working closely to examine this further and who will need to show their leadership to enable change.”

Tom Wheeler, President of Imperial College Union, said: “The compounded issues that occurred on the day of the Varsity rugby match clearly had a significant negative effect on what should have been a celebration of our talented female athletes.

“I believe that the recommendations of the College investigation aim to tackle and address the underlying cultural problems that we face as a community, which I think is crucial for achieving our shared vision for sport at the College.

Mona Theodoraki, Captain of the Imperial College Women’s Rugby Club, said: "It was unfortunate the way the events at Varsity played out, however Imperial have dealt with this very well and I'm happy to see something good come out of this."

Actions agreed between the College and the Imperial College Union to address the broader issues raised through the investigation into the March 2015 Varsity rugby match are as follows:

- To commission external academic research to explore and advise College and Imperial College Union on issues of sexism in sport.  . This work will be informed by confidential workshops, which will be held to capture  students’ experiences of sexism in sport at Imperial.

- To introduce a new format for next year’s Varsity so that it focuses on all sports equally, and is held predominantly on Imperial sites. There will also be wider consideration of whether Varsity matches should continue as purely internal competitions. Other changes will include a ban on the sale of spirits at the sites of Varsity matches and strict enforcement of a ban on alcohol being brought onto the site.

- To make tackling alcohol abuse among students a priority for work within the Health and Wellbeing remit.

- Working in partnership to replace the separate College and Imperial College Union sports strategies with a single strategy, developed in consultation with students and staff.  Questions to be considered include the balance between participation and excellence.