Chris Toumazou, London’s first ever Regius Professor, is known for creating technology that can mimic and replace biological functions. In Imperial’s annual Gabor lecture, Professor Toumazou discussed the variety of healthcare applications for microchips including his ‘lab on chip’ genetic test.

In this video you can watch his unique lecture, including a live demonstration of two of his creations: a digital plaster, which attached to a member of the audience relayed real-time details of his vital signs, and an artificial pancreas implanted in another audience member and relaying live blood sugar information.

Also during his presentation, Professor Toumazou took a DNA sample from the College President Professor Alice Gast, analysed it in real time, and produced a personalised skincare treatment to match her genes and lifestyle. 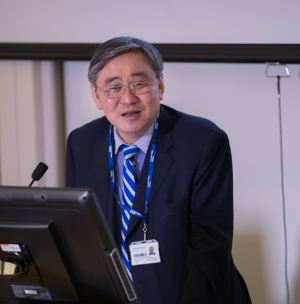 In 1994 Chris Toumazou was the youngest Professor ever to be appointed at Imperial, at the age of 33. In 2013 he became London’s First Regius Professor of Engineering conferred to Imperial during the Queen’s Diamond Jubilee. He is also Founder, Chairman or CEO of two successful medical device companies, Toumaz Technology and DNA Electronics, and he is Chief Scientific Advisor to GENEU. Imperial gets a diamond of a gift from The Queen

U + life: the era of microchip medicine