An Imperial student has received a Fellowship to support her project to deliver affordable electricity to rural communities in India.

Approximately 70 per cent of Indians live in rural communities with only 44 per cent of these households having access to electricity. 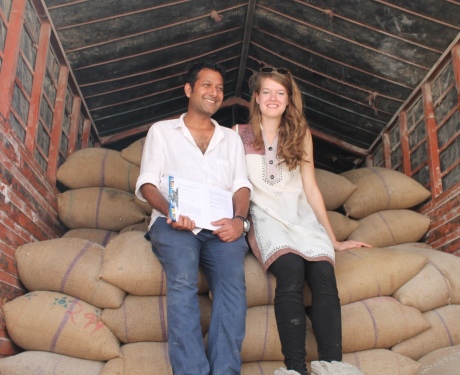 In 2014, Clementine Chambon, a postgraduate from Imperial’s Department of Chemical Engineering, co-founded the start-up company Oorja: Empowering Rural Communities with Amit Saraogi, an Indian social entrepreneur, to develop mini power plants that use biomass such as crop waste as a resource to produce energy for communities in India that are not on the energy grid.

Now, Chambon has been awarded a highly competitive and coveted Fellowship from Echoing Green, an organisation that invests in early-stage social entrepreneurs. The Fellowship will provide seed funding, mentoring and leadership opportunities to further assist Chambon to build mini power plants in rural India.

These plants will also produce biochar, a natural soil additive which could be used by villagers to improve soil fertility and act as a way of storing harmful carbon safely in the soil to mitigate the effects of climate change. The team aim to install the first biomass plant in the upcoming year and, by building further plants, they hope to reach one million individuals over a five year period.

Ultimately, the team hope their project could allow villages to produce their energy independently. It could also help communities to reduce their exclusion from activities enjoyed by urban communities such as increased usage of technology and better access to education and health services.

Chambon said: “If we used all of the 200 million tons of agricultural waste available in surplus annually in India, we could meet 17 per cent of the country’s energy needs. This could significantly reduce the country’s dependence on fossil-fuels.”

Of 3,629 applicants, 52—just over one per cent—were selected to receive Fellowships. Chambon and her co-founder Saraogi will receive US$90,000 in funding for two years, participate in leadership development events, receive mentoring from leading business professionals and become part of a global network of leaders.

The Oorja team were also recently runners up in the Althea-Imperial Prize Competition, which recognises the most innovative female student entrepreneurs in science and technology at the College.