Light and matter mixed in a tiny golden trap Illustration of a molecule coupled with light in a gold nanopore. Image: R Chikkaraddy/J Baumberg

Scientists have mixed a molecule with light between gold particles, creating a new way to manipulate the physical and chemical properties of matter.

Light and matter are usually separate and have distinct properties. However, molecules of matter can emit particles of light called photons. Normally, emitted photons leave the molecule and the two do not mix again.

This is a remarkable crossing of theory and experiment. It’s amazing how much nature behaves like the theory.

Now, scientists have trapped a single molecule in such a tiny space that when it emits a photon, the photon cannot escape. This produces an oscillation of energy between the molecule and the photon, creating a mixing of the properties of matter and light.

This unusual interaction of a molecule with light will provide new ways to manipulate the physical and chemical properties of matter, and could be used to process quantum information, aid in the understanding of complex processes at work in photosynthesis, or even manipulate the chemical bonds between atoms.

The mixing – called ‘strong coupling’ – was achieved at the University of Cambridge following theoretical simulations by scientists from Imperial College London and Kings College London. The results of the experiment are published today in the journal Nature.

To trap the photon, researchers created a ‘nanopore’ – an extremely small cavity of only a billionth of a metre (one nanometre) wide. The cavity is formed between a tiny sphere of gold and a gold film, which creates a mirror image of the sphere. In between the sphere and its mirror image, a dye molecule is caught. This molecule emits the photon that becomes trapped. 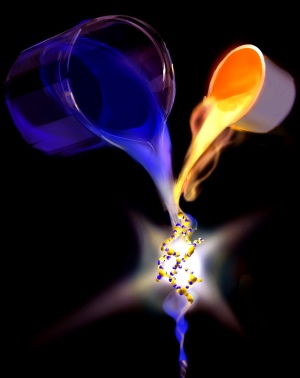 “The cavity is so small that light doesn’t have a choice but to come together with matter,” said Professor Ortwin Hess from Imperial’s Department of Physics, who led in the theory of how to achieve strong coupling and how to interpret the result.

Photons are packages of light that can behave both like particles and like waves, in a way that is described as ‘quantum’. “The experiment is a test that light is quantum in nature and indeed it showed the quantum effects we predicted,” said Professor Hess. “This is a remarkable crossing of theory and experiment. It’s amazing how much nature behaves like the theory.”

“We can now do a whole range of experiments on matter and light that would have been costly and difficult before,” said Professor Hess. “We could use light to change chemical structures, molecule by molecule.

“It could also be useful in quantum technologies. Light carries quantum information, and we could use this strong coupling to copy the information over to matter and back.”

Professor Hess and his research team at Imperial are exploring the theory of such strong coupling interactions for use in creating the smallest ever lasers by stopping light in in its tracks.