Imperial researcher explains her role in mapping the human mind An Imperial engineer talks about her work on an international project to understand how the brain is wired.

Dr Emma Robinson, from the Department of Computing at Imperial, talks to Colin Smith about her work in brain imaging and how it is contributing to The Human Connectome Project.

What is a connectome?

What does your research focus on? 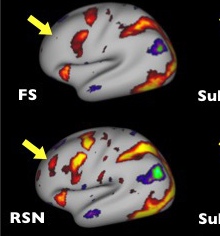 My research focusses on brain imaging. I look at ways of mapping brain activity and structure in people using magnetic resonance imaging techniques. This is incredibly challenging as the human brain consists of approximately 100 billion neurons, and over 100 trillion pathways that connect them. At the moment nobody knows how many regions there are in the brain or what form the regions take.

The yellow/red in the image (above) represent parts of the brain that show an increase in activity during a gambling task. The MSM tool improves the ability to detect the same region, indicated by the yellow arrows, in different brain scans.

What is The Human Connectome Project?

The Human Connectome Project (HCP) involves collecting the biggest and best quality set of brain imaging data that there has ever been. Using the data and state of the art visualisation and analysis tools the researchers aim to better understand the brain at the millimetre scale.

The peaks (yellow) and troughs (blue) in the image (above) show cortical folds.The red and yellow show the presence of myelin in the cortex, which insulates nerve fibres to improve signalling efficiency. The MSM tool also allows researchers to find similarities in different types of brain scans.

Researchers working on the HCP are gathering information and developing a 3D model that will enable them to navigate their way through the brain. By doing this and comparing it with genetic and behavioural data, such as gender and IQ, we hope to unlock information about how a living human brain works.

How are you involved in the Human Connectome Project?

The culmination of the HCP project has been a publication in the journal Nature, led by authors Mr Matthew Glasser and Professor David Van Essen from Washington University in St Louis, USA. This paper is by far the most comprehensive and accurate mapping of brain regions that there has ever been. It describes 180 regions in total of which 97 have never been described before. It represents a culmination of the entire HCP project and would not be possible without the significant advances in image processing and analysis that were developed along the way. My tool represents one of these advances.

The results from the study are important because they could revolutionise the way neuroscientists work. The results gives the community a more accurate means of comparing brain data across subjects. This will enable a better understanding of how the brain works and what is different in subjects that have conditions such as autism, dementia or mental illness.

Can you explain how your computing tool works?

The tool is called Multimodal Surface Matching (MSM). It has been vital for this study because it enabled us to compare and contrast brain activity across all people who took part. This allows us to more confidently identify regions by seeing that each region has the same pattern of activity in each person’s brain.  In more general imaging studies my tool might allow clinicians, for instance, to compare brain activity between healthy people and patients with dementia so that we can better understand the effect that these diseases have on brain function. This tool will soon be available as part of the Oxford imaging software library FSL.

How can this research benefit people?

An accurate model of how the brain is wired could have significant implications for our understanding of a healthy human brain. It may also lead to new insights into when the brain is wired in a different way, which can lead to behavioural and cognitive problems. For example, it may help us to learn more about conditions such as autism and dementia, leading to earlier support for patients.

It also has a potentially big impact on the rapidly developing field of artificial intelligence. Current AI technology has been inspired by existing knowledge of human brain function. Therefore, improved understanding in this arena could continue push forward research in this field.

The next steps are really exciting. I am already working on methods to improve on these results by looking more closely at how brain structure varies across different people. I am also collaborating with researchers from Kings College London and Oxford University on further on the developing Human Connectome Project (dHCP). We hope to replicate the success of it by imaging newborns and foetuses in the womb with the goal of generating a connectome. This would give us new insights into the brain at a very early stage in its development.