World's megafires to be tackled through new project This is an example of a small-scale smouldering fire in peatlands in the UK.

Combatting some of the world's largest smouldering megafires will be the focus a new project, which will be led by an Imperial academic.

Dr Guillermo Rein, from the Department of Mechanical Engineering at Imperial, has a €2 million grant from the European Research Council (ERC), where he will be leading on a project to tackle the global problem of smouldering peat megafires.

Colin Smith caught up with Dr Rein to find out more about peat megafires and why they are such a menace to the planet. 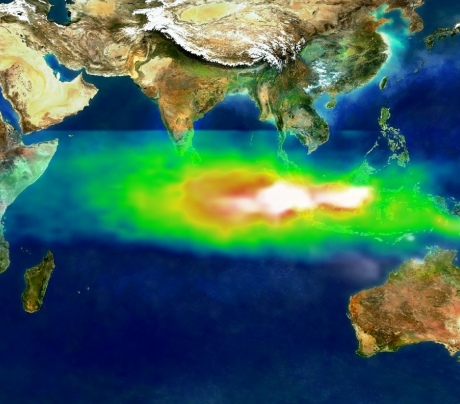 This image shows the pollution from a smouldering megafire over Indonesia and the Indian Ocean on October 22, 1997. White represents smoke and the green, yellow and red pixels represent increasing amounts of smog being carried to the west by high-altitude winds (image NASA).

What are smouldering megafires?

As the name suggests, smouldering fires don’t look like regular fires with flames. The burning can occur deep below the surface inside the peat layers. The main way to tell if a smouldering megafire is occuring is from the smoke generated.

Smouldering megafires are the largest and longest-burning fires on Earth. They destroy essential peat land ecosystems, and are responsible for 15 per cent of annual global greenhouse gas emissions.

After weeks of continuous burning, the smoke and haze from one of these fires can travel across continents and oceans and become a major problem for countries in the vicinity of these smouldering events. Events like these happen on a regular basis in South East Asia.

What is the global challenge they represent?

The greenhouse gas emissions released in these smouldering fires are estimated to be the same amount attributed to the whole fleet of road vehicles worldwide or ten times the carbon footprint of the UK.

What is most worrying is that their impact is not yet accounted for in global carbon budgets. This is because there are very few experts worldwide who understand these fires. As a consequence there isn’t enough data gathered yet that can be fed to climate modellers, so that we can truly understand their impact on global warming.

Where do these fires occur and what are their impact on people?

Peat fires happen all over the globe in countries such as Russia and even as far afield as Indonesia.

These fires induce surges of patients with breathing difficulties in the population and disrupt shipping and aviation routes for long periods - weeks even months.

What is the current challenge with fighting these peat fires?

Megafires are routinely fought across the globe with techniques that were developed for fires with flames, and are thus ineffective for smouldering fires.

Another problem is that these fires can travel deep into the peat layers, which releases carbon that has not been part of the active carbon cycle for centuries to millennia, thus accelerating climate change.

How will your project address the challenge of these peat fires?

Despite their importance, we do not understand how smouldering fires ignite, spread or extinguish, which impedes the development of any successful mitigation strategy.

The ambition of our project is to advance the science and create the technology that will reduce the burden of smouldering fires.

We’re planning controlled laboratory experiments to discover how peat fires ignite, spread and extinguish. We are also developing computational models that will simulate the real phenomena. Using this information we plan to develop new technologies that will prevent outbreaks. Where smouldering fire outbreaks do occur we aim to have a device that can quickly detect them. Most importantly, by the end of this project we aim to have a tool that can model any smouldering fire outbreak, so that bespoke suppression strategies can be developed and implemented.

I am very excited about this project as it gives Imperial the chance to lead on fighting these smouldering peat fires on a global scale.