Bioengineering PhD student and Army Officer Captain Dave Henson MBE is ready to make his mark on this year's Paralympic Games in the T42 200m.

PhD student Dave, who previously completed an MSc at the College, is one of 264 Paralympics GB athletes hoping to replicate the success of their Olympic teammates at this year’s Rio games. 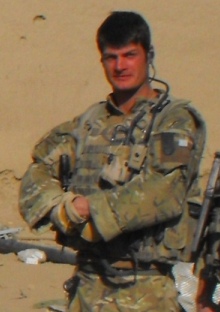 Before joining the College, Dave served in the British Army with the 22 Engineer Regiment. It was during military service in Afghanistan that he was injured by an improvised explosive device (IED).

Despite the best efforts of the expert medical team, Dave’s right leg was amputated above the knee and his left leg through the knee.

During his rehabilitation, Dave found a passion for sport. He first took part in open water swims for charity, then tried sitting volleyball – but it was when he got his running prosthetics that he found the sport that would take him to Rio.

Rising to prominence in 2014 Dave competed for Team GB at the inaugural Invictus Games. Leading the British team of injured service personnel and veterans, he was also involved behind the scenes in organising Prince Harry’s competition for armed services representatives from around the world. 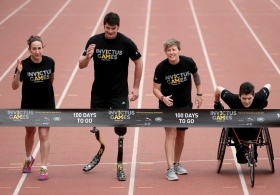 Since beginning his PhD in 2015 Dave has balanced his athletics and his research which led to him qualifying for the Rio games earlier this year.

Dave said: "Balancing a PhD with being a full-time athlete has definitely proven quite challenging, but Imperial and the staff in the Department of Bioengineering have been incredibly supportive of my sporting ambitions.

Imperial and the staff in the Department of Bioengineering have been incredibly supportive of my sporting ambitions.

“Studying part time has provided the flexibility I've needed in order to push my sport to the highest level, with time provided in my research plan for the European and World Championships, and now the Rio 2016 Paralympic Games."

Dave’s research focuses on issues faced by amputees, in particular knee joint implants for people with through-knee amputations which aim to enable them to regain some of the function lost in the knee joint.

Professor Anthony Bull, Head of the Department of Bioengineering, said: “We’re all incredibly proud of Dave, both in what he is achieving in the department but also in his athletics too. He’s a great ambassador for his sport and his discipline.

“It’s great to see him competing at such a high level and I’m sure the whole of the Bioengineering community at the College will be tuning in to cheer him on. Fingers crossed he’ll be bringing a medal home!”

You can follow Dave in action during the first heats of the men’s T42 200m which take place on Saturday 10 September.

What is the T42 classification? The 2016 Paralympics in Rio involves 22 sports but not all disability categories can compete in each event.

Each sport has different physical demands and so has its own set of classifications.

All impairment groups can compete in athletics but a system of letters and numbers is used to distinguish each class.

A letter F is for field athletes, T represents those who compete on the track, and the number shown refers to their impairment.

T42 is one of six classes for track and field amputees.

In classes 42-44 the legs are affected and in class 45-47 the arms are affected. Athletes in these classes compete standing and do not use a wheelchair.