The UK decision to leave the EU was based on a rational cost-benefit analysis rather than ignorance and prejudice, said David Miles last week.

In a panel discussion at Imperial College Business School, David Miles CBE, Professor of Financial Economics and former member of the Monetary Policy Committee at the Bank of England, and Chris Giles, Economics editor at the Financial Times, debated the potential economic impact of Brexit.

Divorce is always messy and there’s never a good time to negotiate it.

Addressing a full audience of Harvard, Princeton and Imperial alumni, Professor Miles disagreed with the view that some economists have in the UK: that ‘no’ voters completely ignored the potential economic costs or were totally ignorant of them and voted out of a combination of ignorance and prejudice. Rather, he said, “there was a fairly rational cost-benefit analysis that may have gone through the minds of many people who voted to leave”.

Giles, on the other hand, said that economists had been almost entirely on the remain side and that their advice had been ignored roundly by the population. In terms of the immediate cost to the economy, although the aftermath had thus far been better than that expected by many remain voters, the exchange rate was 19% down, which means that the UK has “lost £700 billion worth of purchasing power since 23rd June - £10,000 per person in UK”. In addition, he pointed out that the UK stock market index was down 30% compared to rest of the world. 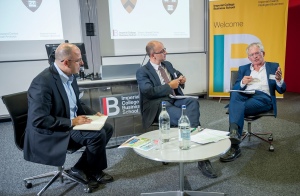 Miles responded by saying that it was easy to exaggerate the costs of leaving the EU. "If I take a simple average of estimates to the long run GDP cost, they're about 3-4%". He went on: "Although this is not a trivial number, it is not an enormous number either: it is the equivalent of losing two years of growth".

He also argued that the recent depreciation of the exchange rate should not be added into the mixture: “it is quite possible that the exchange rate was at quite an unsustainable level on June 22nd, and I think that much of the decline in sterling since then was necessary and may just have happened rather more quickly than it otherwise would.”

In terms of the main benefit of leaving the EU, Miles pointed to avoiding future costs related to a continued push towards centralization and ever closer union, in which the UK may have found it “ever harder to find opt-outs to things it didn’t like”.

He went on to quote Mervyn King, former governor of the Bank of England:

“Why would you want to be a member of a tennis club if you do not play tennis and indeed actively dislike the game, simply in order to play a game of bridge once a month? That is the fundamental problem in Britain’s relationship with the other members of the EU.”

In conclusion, Miles noted that “divorce is always messy and there’s never a good time to negotiate it. On the other hand, being in an unhappy marriage is not a great thing either”.

This panel discussion on the potential impact of Brexit was organised by the Brevan Howard Centre for Financial Analysis at the Business School.

A full transcript of the panel discussion is available here