More than 2,200 undergraduate students in front of some 6,800 guests will take to the stage in the Royal Albert Hall to receive their degrees today.

The major problems facing the world extend beyond national borders

For the first time the ceremonies are being streamed live – allowing family and friends around the world to join in with students’ celebrations.

“You have learned from academics who may have been born in one country, educated in another, and who collaborate globally in their research. You have shared classes and made lasting friendships with students from all over the world. 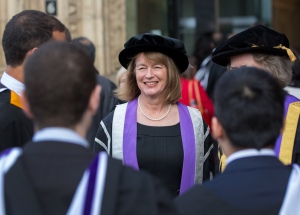 “The major problems facing the world extend beyond national borders and demand global cooperation and collaboration.

“We need people who understand that the well-being of a nation is enhanced, not hindered, by working for the global good”.

“You are entering a world with intensive globalisation along with serious backlash to it.

The College will confer honorary degrees on the following people:

The Admiral of the Fleet The Lord Boyce, crossbench member of the House of Lords and Chair of the Advisory Board for the Royal British Legion Centre for Blast Injury Studies at Imperial, receives an Honorary Degree of Doctor of Science in recognition of his outstanding contribution to the military covenant and the better understanding of injuries to, and compensation for, service personnel.

Professor Yves Lévy, Chief Executive Officer and Chairman of the French National Institute of Health and Medical Research, receives an Honorary Degree of Doctor of Science (Medicine) in recognition of his outstanding contribution to medical research.

The following people will receive Imperial College medals in recognition of their considerable contributions to the life and work of the College:

Ezara Bird, Senior Laboratory Aide in the Cancer Division, Department of Surgery & Cancer, for her excellent support of the Division’s research.

Professor Justin Cobb, Professor of Musculoskeletal Surgery, Department of Surgery & Cancer, who spearheaded the approach to Imperial alumnus Michael Uren and the Michael Uren Foundation which led, in 2014, to a donation of £40 million – the most generous in Imperial’s history.

The Baroness Manningham-Buller, crossbench member of the House of Lords, Chair of the Wellcome Trust, and former Director General of MI5 who served as Chair of the Court and the Council at Imperial from 2011 until 2015.

Doris Pappoe, Postgraduate Administrator in the Department of Chemistry, who has helped support over a thousand research students over her30 years of service to the College.

Lisa Phillips, Senior Human Resources Manager, whose service to the College has spanned more than thirty years. Her work as a member of Imperial’s redundancy avoidance group helps ensure a consistent, transparent and fair approach to change and restructuring.

Margaret Quinn, Hall Supervisor at Imperial’s Evelyn Gardens, who has welcomed and supported nearly 17,000 Imperial students during her 28 years at Imperial.

The Outstanding Student Achievement Award will be presented to Usama Syed, a graduate of Imperial College School of Medicine. Usama’s achievements include working with colleagues to develop an app which can streamline the provision of feedback from front-line hospital staff to senior medical directors. During his time at Imperial he also founded the MedTech society, bringing together students from medical, engineering and computing departments at the College to drive healthcare innovation.

President’s Medals for Outstanding Contribution to Teaching Excellence will be awarded to Professor Martin Blunt, Department of Earth Science and Engineering; and Dr Sonia Kumar, School of Public Health

Watch Commemoration ceremonies as they happen

Watch the Faculty of Natural Sciences ceremony live from 10.25

Watch the Faculty of Engineering ceremony live from 13.40

Watch the Faculty of Medicine ceremony live from 16.55

Commemoration Day is named in honour of a visit to Imperial by King George VI and Queen Elizabeth in 1945, on the centenary of the foundation of the Royal College of Chemistry, Imperial's oldest forerunner.