Sir Paul Nurse and The Queen

The Queen and The Duke of Edinburgh, accompanied by The Duke of York, opened the &pound;650 million Francis Crick Institute in London on Wednesday.

The Crick is the biggest biomedical research institute under one roof in Europe and is investigating the fundamental biology underlying human health and disease. Imperial College London is one of its founding partners, alongside the Medical Research Council (MRC), Cancer Research UK, Wellcome, UCL (University College London), and King's College London. 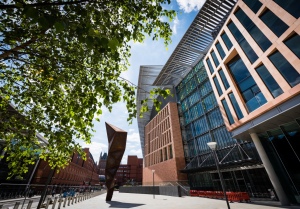 During their tour of the Crick, The Queen and The Duke of Edinburgh saw some of the state-of-the-art facilities for research, including the advanced sequencing and peptide chemistry laboratories. They spoke with Imperial’s President, Professor Alice Gast, and representatives of the other founding partners. They also met many of the scientists and staff of the Crick, along with major donors who have contributed to it.

The Crick is bringing scientists together from across disciplines to tackle the pressing health concerns of the 21st century. At full capacity in 2017, it will be home to 1,250 researchers, including from Imperial, and a further 250 support staff.

Professor Alice Gast, President of Imperial College London, said: “The opening of The Francis Crick Institute confirms London’s central place as a leader in medical research. It is an awe-inspiring space for brilliant science which will strengthen the fight against cancer, heart disease, infections and neurodegeneration. 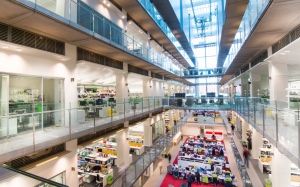 The Crick is bringing scientists together from across disciplines.

“Imperial’s strategy says that no university can realise the full benefits of its work by itself. We are proud to be a founding member and we look forward to building on our collective strengths to shape the future of biomedical research.”

As part of her tour, The Queen started the sequencing of the genome of the Crick’s Director, Sir Paul Nurse – all three billion letters in his DNA code.

Sir Paul, who is also a former President of the Royal Society and a Nobel laureate, said: “It was a delight to welcome the Queen to our new building for the Francis Crick Institute and show her some of the science that we are carrying out to understand the human body better in health and disease.”

He added: “As part of the visit, she sequenced my genome and we’ll find out the results in the coming weeks. In our normal work at the Crick, we use this type of advanced sequencing to understand more about genetic influences on disease.”

The visit finished with the Queen unveiling a plaque to mark the opening of the institute.

Construction of the new Crick lab in St Pancras was completed in August 2016. Researchers will continue moving into the new building from the Crick's legacy institutes and university partners until the end of the year.

As a world-leading centre of biomedical research and innovation, it has scale, vision and expertise to tackle the most challenging scientific questions underpinning health and disease. The aim is to find new ways to prevent, diagnose and treat conditions such as cancer, heart disease and stroke, infections and neurodegenerative conditions like motor neurone disease.

The Crick also has a strong national role. By taking a collaborative approach, training future science leaders, taking forward discoveries towards new treatments for patients and engaging with schools and the public, the Crick aims to boost UK science and help drive the UK economy.

Opportunities to get involved

-       Imperial has an attachments programme that allows people to build on existing collaborations or to kick-start new collaborations at the Crick. Applications are welcome from Imperial researchers in any discipline, and multidisciplinary proposals across the physical and engineering sciences and clinical translation are particularly encouraged.

-       The attachments programme allows Imperial staff to undertake a 1-year sabbatical, to place a research ‘satellite’ group in the Crick for up to 3 years, or to move to the Crick as a secondment (with their research group) for up to 6 years.

-       There are also co-funded joint studentships, where Imperial supervisors shape the project, with the student splitting their time between the Crick and Imperial lab.