The four categories of the President’s Awards for Excellence in Societal Engagement – Achievement, Collaboration, Leadership, and Inspirational Partner – recognise the achievements of staff and external partners across schools engagement, community engagement, engagement with research or patient engagement.

Engaging the public has always defined Imperial's role in society

The awards were announced in front of staff, students and College partners at a reception on 22 November, hosted by Professor Maggie Dallman, Associate Provost (Academic Partnerships).

Introducing the College’s societal engagement work, Professor Dallman said: “Here at Imperial our vision for Societal Engagement is a simple one – to enable people of all ages and backgrounds to share the wonder of science, engineering, medicine and business.

“This ethos has always been a cornerstone for us. Since our foundation in 1907, Imperial’s mission has been to achieve enduring excellence in research, and education in science, engineering, medicine and business for the benefit of society. In other words, engaging the public – and demonstrating this impact – has always defined our role in society.”

The inaugural President’s Medal for Excellence in Societal Engagement, recognising exceptional contribution to societal engagement, was awarded to Professor Roger Kneebone and Dr Fernando Bello, and the team behind the Imperial College Centre for Engagement and Simulation Science (ICCESS).

ICCESS uses realistic simulations to involve patients in care and research the implications of new surgical technologies. The Centre's activities have enhanced patient understanding whilst enabling clinicians to get a better insight into patients’ concerns and fears.

Professor Kneebone said: “ICCESS’s focus is on advancing human health through simulation – we use simulation to bring people together around areas that words alone can’t convey, such as operations.

“We look at the science of engagement, and to do this we have worked closely with colleagues from different fields - not only clinicians and scientists within Imperial, but also our neighbouring institutions in South Kensington, including the Science Museum, Victoria & Albert Museum and the Royal College of Music.

“Winning the medal puts us on a new level – it shows that Imperial not only recognises but honours the work that we’re doing.”

The Collaboration Award for Societal Engagement is for staff who have delivered successful engagement activities through collaborating with other departments and external partners. It was awarded to the Heart and Lung Repair and Convenience shops, led by Ellen Dowell and Professor Sara Rankin from the National Heart and Lung Institute (NHLI). 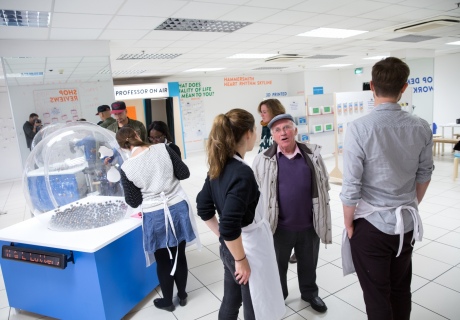 The projects saw empty retail units temporarily transformed into science pop up shops, hubs for science engagement with a local community audience. The two pop-up shops involved collaborations with over 20 creative practitioners and over 150 researchers at all levels, from students to professors. 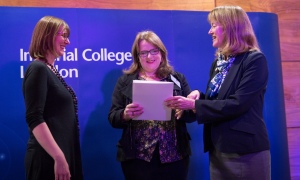 Professor Rankin said: “I’m really pleased we got the Collaboration Award, because that’s exactly what it was. We worked with so many different people, including partners from outside the College such as a theatre company and a radio station – it’s amazing to have had that recognised.

“Following the success of the pop up shops, we’re now working with the British Heart Foundation, holding some pilot engagement events in their Furniture and Electrical store in Ealing.

The Achievement Award for Societal Engagement, for staff who have taken the initiative to deliver high-quality engagement activities with the public, schools, community groups or patients, was awarded to the ‘Plastic not fantastic in our oceans’ initiative, led by Dr Erik van Sebille from the Grantham Institute. 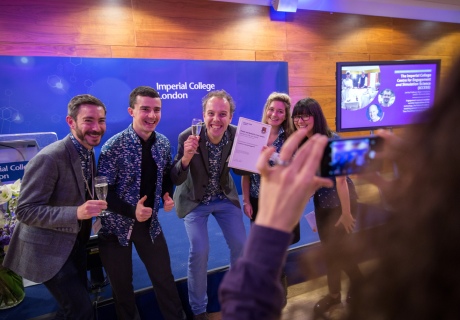 Members of the Plastic not fantastic team

Responding to the global challenge of plastics in the marine environment, the team developed an exhibit that was shown at this year’s Royal Society Summer Science Exhibition and the Imperial Festival.

The awards also recognise staff who have demonstrated an on-going commitment to societal engagement, actively supporting other staff and students to get involved. 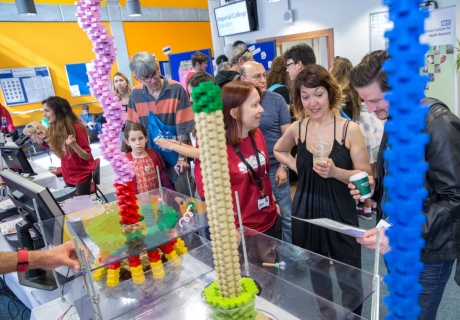 The Superbug Zone at the 2016 Imperial Festival

The Leadership Award for Societal Engagement was awarded to Natasha Martineau (Head of Research Communications) in recognition of her work expanding the College’s public engagement platforms (including the Imperial Festival), and supporting others to develop their knowledge of public engagement. 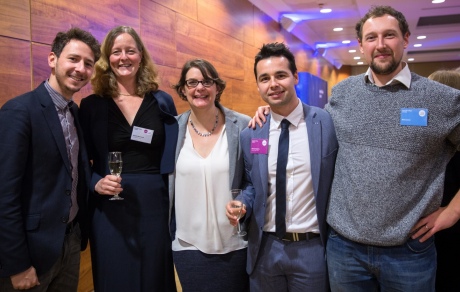 Natasha Martineau (2nd from left) with members of her team

The Societal Engagement award scheme offers one category aimed at individuals and teams outside Imperial. The Inspirational Partner Award for Societal Engagement was awarded to Native Scientist, led by Dr. Joana Moscoso and Dr Tatiana Correia. Native Scientist works with scientists from Imperial and beyond, to engage school pupils from immigrant communities in STEM subjects. 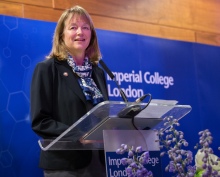 Imperial’s President Professor Alice Gast presented the winners with their awards. She said: “This celebration is an important one.  By honouring those who lead Imperial in societal engagement, we are making a very public statement about the value we place in their work. Your efforts matter greatly to us and we thank you for all that you do.

“We have done a lot together, but we have plans for so much more. Your collaboration and support is essential.”

Nominations for the 2017 President’s Awards for Excellence in Education, Research, and Societal Engagement will open on Monday 5 December. The 2017 Awards will include a new category specifically for Imperial students. Find out more