New software, developed by scientists at Imperial College London, has created virtual 3D hearts of each patient that replicate the way the organ contracts with each beat. Artificial intelligence is able to rapidly learn which features of cardiac function best predict heart failure and death. The system uses magnetic resonance imaging (MRI) of the heart together with information from blood tests and other observations.

The technology has been tested on patients with pulmonary hypertension, a condition that leads to heart failure if not treated appropriately. However, the type of treatment needed depends on predicting whether patients fall into high or low risk groups – which is often inaccurate using current techniques. 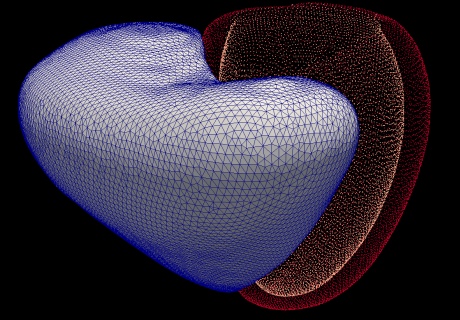 The results, published in Radiology, show that this machine learning programme is more accurate and faster at making predictions than current methods.

Dr Declan O’Regan, lead author from the MRC London Institute of Medical Sciences (LMS) at Imperial College London said: “This is the first time computers have interpreted heart scans to accurately predict how long patients will live. It could transform the way doctors treat heart patients.”

The researchers say the technology can be used in the future on patients with other types of heart disease.

Pulmonary hypertension affects up to 7000 people in the UK, and is characterised by high pressure in the blood vessels that supply the lungs. The condition puts strain on the right side of the heart and causes progressive damage over time, ultimately leading to heart failure if not treated. Up to a third of patients die within five years of diagnosis.

Treatment for pulmonary hypertension, which can include medication to allow blood to flow more easily through the lungs, can help at-risk patients to live longer.

Until now, radiologists have relied on taking time-consuming measurements of heart function by hand to identify patients at greatest risk of deteriorating. In the new study, scientists used artificial intelligence or ‘machine learning’ to predict survival in patients better and more quickly than current methods.

Using historical data from 250 patients at Imperial College Healthcare NHS Trust’s Hammersmith Hospital, the software analysed moving MRI images of each patient’s heart to replicate the way over 30000 points in the heart contract during each beat. With this information, it created a ‘virtual 3D heart’ of each individual and automatically learned which features were the earliest predictors of heart failure and death.

The goal is to see if better predictions can guide treatment to help people to live longer.

Co-author Dr Tim Dawes, of the LMS, who developed the algorithms that underpinned the software, said: “The computer performs the analysis in seconds and simultaneously interprets data from imaging, blood tests and other investigations without any human intervention. It could help doctors to give the right treatments to the right patients, at the right time.”

The technology could even be used to predict the outcomes of other heart conditions in the future, added Dr Dawes: “We would like to develop the technology so it can be used in many heart conditions to complement how doctors interpret the results of medical tests. The goal is to see if better predictions can guide treatment to help people to live longer.”

The team now plan to test the software on patient data from a different hospital to the one in which it was developed, to verify the findings. The ultimate goal is to develop software to make predictions not only about survival, but also about which type of treatment will work best in each patient.

This work was made possible by collaborations between clinicians at the LMS and computer scientists at Imperial College London.