Imperial's contribution to the Solar Orbiter mission, which will go closer to the Sun than anything so far, is ready to fly after extensive testing.

Solar Orbiter is a European Space Agency mission carrying ten instruments to measure many different properties of the Sun and interplanetary space.

Our instrument is so sensitive, it could measure the magnetic field of an MRI machine from the other side of London.

Aboard the spacecraft, launching in early 2019, will be a magnetometer instrument built by a team from the Department of Physics at Imperial.

Principal Investigator Professor Tim Horbury from the Department of Physics at Imperial said: “We live inside a bubble blown by the Sun in interstellar space. The Earth also has its own magnetic field, which creates a cavity in the solar bubble.

“The interaction between the solar wind and Earth’s magnetic field gives us the aurora – the Northern and Southern Lights – but when the solar wind is strong it can also cause problems for our technology, from power grids to satellites.” 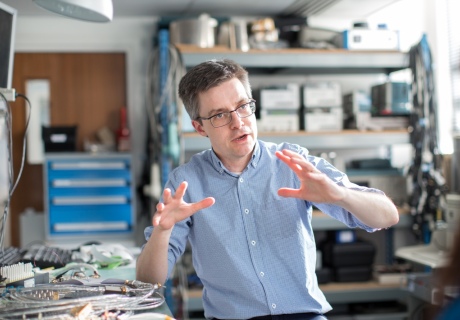 The Sun’s magnetic field is thought to be generated in a similar way to the Earth’s as it rotates, but it is much more dynamic. Every 11 years the polarity reverses, and this pattern is tied to the pattern of sunspots that appear on the Sun’s surface. Sunspots are associated extreme events called solar flares and ejections of the solar material that cause serious problems if they reach Earth.

By orbiting the Sun and approaching it at a distance of only 50 million kilometres – inside the orbit of Mercury, the closest planet to the Sun – the Imperial team’s magnetometer will be able to get unprecedented information about how the Sun generates its magnetic field and how this plays a role in the solar wind and more extreme events.

The instrument is made up of two sensors hosted within metal domes; a black box containing electronics, a computer processor and a power supply; and cables to provide power and communications to the sensors. 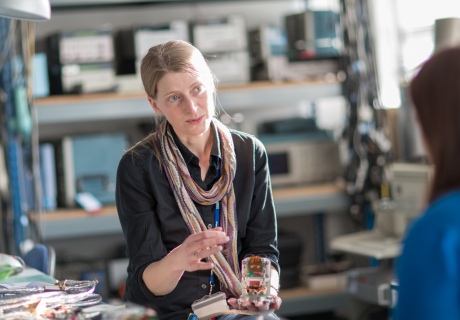 Helen O'Brien with a sensor

The magnetometer has to be extremely sensitive to detect the magnetic field from the Sun that will reach the spacecraft. Lead engineer Helen O’Brien from the Department of Physics said: “Our instrument is so sensitive, it could measure the magnetic field of an MRI machine from the other side of London.

“This means, however, that we have to work hard to isolate it from the other instruments on the spacecraft. Metal objects and electrical circuits create small magnetic fields, so we have really strict requirements on the rest of the project – right down to the screws and the paint.”

The magnetometer also has to survive some extreme conditions, including the intense vibration from the take-off, which will use a NASA Atlas V rocket. An earlier model of the instrument, which was put through rigorous tests designed to exceed the expected conditions, crumbled under the strain. 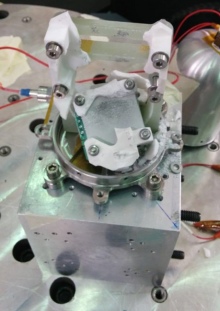 O’Brien said: “We mounted the sensors on a ceramic material that barely expands or contracts with temperature changes, so that their relative position to each other is kept stable during the extreme temperature swings the spacecraft will experience. However, this material is quite brittle, and it fell apart in the vibration test.”

Thickening the material helped to solve the problem, and as a result of rigorous testing many tweaks and improvements have been made to the design. But now, the device is finished, and it is waiting in a clean room at Imperial before it gets mounted onto the spacecraft.

In the meantime, the team are building a ‘flight spare’ – an identical device just in case something happens to the original before launch. When the instrument is mounted on the spacecraft, the team will be giving extremely precise instructions – down to the material the screwdriver is made out of, and making sure no tiny shavings of metal are left behind, which could disturb the measurements.

Once all the instruments are mounted, the whole spacecraft will go through another barrage of tests, before being shipped to Cape Canaveral for launch in February 2019. It will then spend two years getting to the Sun, and another eight collecting data. Eventually, its solar panels will degrade and stop producing power but it will drift around the Sun forever. 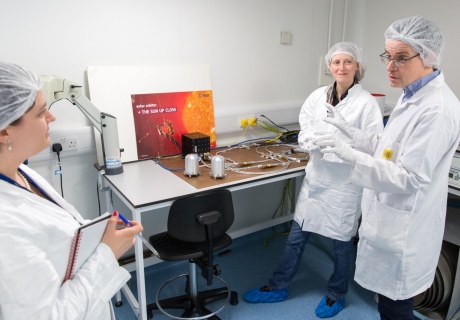 Imperial team are gearing up for their mission to the sun Profile of a comet chaser: Dr Matt Taylor Imperial team to study Jupiter's moons in first outer-planetary European mission