Imperial Festival 2017: Behind the scenes of the combustion lab Ahead of his appearance at Imperial Festival, we speak with Dr Guillermo Rein, Imperial's resident fire expert.

“There is an ingrained human fascination with flames, which is almost certainly etched in our genetic code and reinforced by thousands of years living in caves and being dependent on fire,” Dr Guillermo Rein muses when we meet in Imperial's combustion lab – also called the Hazelab. “As Asimov said ‘fire is the greatest single discovery in human history’, indeed, the first industrial revolution was actually sparked by our ability to handle and tame flames.” 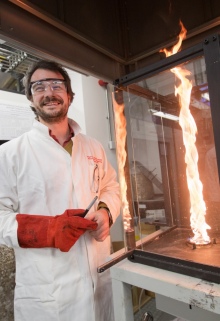 Guillermo is Reader in Thermal Energy (soon to be Professor of Fire Science) in the Department of Mechanical Engineering and his research is focussed on heat transfer, combustion and fire. The chief purpose of his work is to reduce the worldwide burden of accidental fires and protect people, their property, and the environment. Yet, he points out that this modern field of study was actually born from much more malign origins.

“World War II saw a lot of research put into developing incendiary bombs that were designed to be specifically damaging to the type of construction prevalent in enemy cities. When the war was over though, the scientists decided to use their unique knowledge to fight against fire instead of promoting it, which was essentially the beginning of Fire Safety as a scientific field.”

Many advances have been made since that time and now all buildings must have been approved by the expertise of fire safety engineer. Yet fire is extremely complex phenomenon and there is still much to learn about how it ignites, how it spreads, how it produces smoke and how it can be suppressed. Guillermo and his team attempt to answer these and other questions with a number of computer models and experiments in Hazelab.

One of the experimental demonstrations they use – dubbed Sirocco after the hot mediterranean wind – is a piece of kit that creates a tall and whirling flame or fire tornado. It consists of a dish holding a small pool of liquid fuel enclosed by an open-top chamber with asymmetric slots on the sides, which allow air into the fire. Once ignited the tall and whirl flame develops and burns much faster and fiercely than a normal flame without the enclosure. The flame itself is quite beautiful and almost hypnotic to watch, revealing on closer inspection to have texture and multiple different interwoven columns of flame. Exactly how it forms this structure though, is still a matter for research. That’s important, because whirl flames can occur in nature, particularly in forest fires or large urban fires, due to asymmetric currents of air created by other trees, hills and surrounding buildings. They can whip up powerful winds that pick up and hurl burning debris. 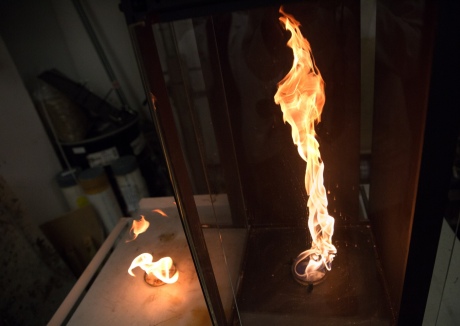 [Above: Two identical dishes of ignited liquid fuel, with the right one housed in a simple enclosure with asymetic air slots]

Sirocco will form the centrepiece of the Hazelab booth at the Imperial Festival, but there will also be other exhibits. Guillermo has long been intrigued by the role fire has played in historical events. For example he recently contributed to a surprisingly new theory about the Titanic – that it concealed a large smouldering fire among its coal reserves before it even left port in Southampton, and this might have contributed to its rapid sinking.

Now he has turned his attention to the Great Fire of London of 1666.

“The Great Fire of London has been studied a lot; certainly the human side of it − the history of the people, the drama, the politics − but virtually nothing on the physics and dynamics of how the fire spread. For us, fire scientists, it’s almost like a blank canvas. 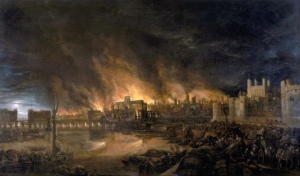 Artist's impression of the Great Fire

“The first thing we realised is that the fire was so large and came out of the buildings so easily, that it behaved more like a forest fire than a typical residential fire, and as a result the city of London wasn’t prepared for it or experienced in dealing with it. In the reports they talk about ‘firedrops’ – which are actually intense ember showers driven by the wind and what we now know to be a major mechanism of spreading in forest fires.”

To replicate the phenomenon the team constructed a new device, which they call the Imperial Dragon, which sprays ember showers in a controlled manner. They used the Dragon to perform an experiment on roofs typical of the 17th centuay. The results were quite surprising, and the charred remnants will be on show at the Imperial Festival alongside a video of the Dragon in action.

Guillermo is no stranger to communicating science to the public, giving regular interviews and featuring in TV documentaries, and says he feels an obligation to do so as taxpayer-funded researcher.

“More to the point though, I actually love it and I think I’ve become somewhat addicted! It helps that the subject really resonates with the public and people have this natural fascination and fear of fire, which provides a platform to talk about how science contributes to the engineering of fire safety. It raises our profile and also helps with learning, even with our undergraduates, who might have previously found certain modules a bit dry, but are drawn in my courses because they see unusual applications like in the Titanic case. It helps with research too, this year all of my research group has enthusiastically volunteered to help in the exhibit at the Festival, which is great.”

Imperial Festival runs from Saturday 6 to Sunday 7 May, visit the website for more details