White City schoolchildren buzzing after Spring on the Farm Young explorers from primary schools in White City learned about the importance of bees and other pollinators at a celebration event at Phoenix Farm.

Over 120 local schoolchildren came along to a ‘Spring on the Farm’ event on Friday 19 May organised by Hammersmith Community Gardens Association (HCGA), celebrating the 10th anniversary of Phoenix School Farm.

Speaking after the event, Cathy Maund, director of the HCGA, said: “We would like to thank the team from Imperial and OPAL for taking part in the Spring on the Farm event. It was great for local school pupils to find out more about pollination in a fun and interactive way, learning from the active beehives we have here on the farm.”

The children were able to get up close to the beehives at Phoenix Farm and learn more about the decline of pollinators, including bumblebees, butterflies and flies, and their habitats, as well as finding out what they could do to help the bee population in the area.  Pupils also planted seeds to grow bee-friendly plants at home, helping to provide more places for them to feed. 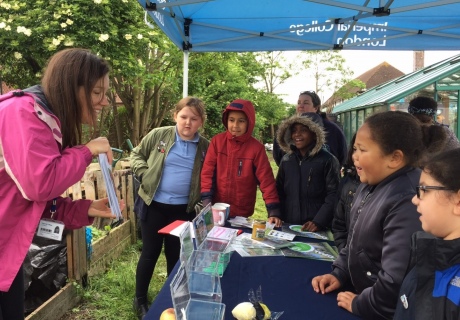 “We were thrilled to get this chance to work with pupils from schools near the College’s new campus in White City”, said Dr Poppy Lakeman Fraser, senior coordinator at OPAL.

“OPAL is all about putting science and nature into the hands of people from all backgrounds so we’re delighted to work with these schools and with inspiring community enterprises like the Hammersmith Community Gardens Association.”

Imperial has already held similar events with other local organisations – including Wormholt and White City Big Local, and Queens Park Rangers – as it develops a major new campus in White City.

As well as providing a new base for Imperial staff and students, the campus is creating new opportunities for interaction and collaboration with the local community.

If you would like to find out more about our community engagement activities or how to get involved, please email the White City Community Engagement Team on whitecity.community@imperial.ac.uk. Comment on Everything you need to know about Imperial’s COVID-19 vaccine trial: Like others, I too am very proud to have studied at Imperial - in the mid-1970's- & to see this proa…