Proteins found in the muscles of tarantulas are helping scientists to understand how genetic changes can lead to serious heart conditions.

Although spiders may appear to have little in common with humans, some of the proteins that make up their muscles are similar to those in our own bodies, including muscle found in the heart.

In a study, published today in the journal eLife, researchers have used spider proteins to uncover how mutations in a single gene can lead to two forms of cardiomyopathy, one of the most common causes of heart failure and sudden death in otherwise healthy young people.

The team, led by Dr James Ware from the MRC London Institute of Medical Sciences (LMS) at Imperial College London, and involving researchers from Harvard Medical School and the Venezuelan Institute for Scientific Research, believe the findings could help to make genetic tests for the condition more accurate.

At the heart of the research is a protein called myosin, a key component of heart muscle. Mutations in the gene that produce this protein can cause different forms of cardiomyopathy, which affects around 1 in 250 people in the UK.

Dr Ware and team were trying to understand why different mutations in the same gene could lead to these two different forms of the condition: dilated and hypertrophic cardiomyopathy.

Dilated cardiomyopathy occurs when the heart muscle becomes thin and weak, and the heart chambers expand (dilate). In contrast, in hypertrophic cardiomyopathy, the muscle thickens and the chambers at the base of the heart become smaller. Both conditions affect the heart’s ability to pump blood around the body effectively. Symptoms include breathlessness, chest pain, palpitations, dizziness and loss of consciousness.

The researchers used spider proteins as they enabled them to explore 3D protein structure in much greater detail than is currently possible with human models alone. They found that the long, thin muscle fibres in spiders’ legs enabled them to see not only the structure of individual proteins, but also how these proteins interact with their neighbours.

In heart muscle, chains of myosin proteins form thick filaments, which sit side-by-side with thinner filaments, called actin. When a muscle contracts, the myosin fibres slide along the actin fibres to shorten the length of the muscle. It has been known that some cardiomyopathies are caused by mutations that interfere with myosin’s ability to bind to actin, changing the heart muscle contraction.

However, most previous studies have focused on single myosin molecules in isolation. In this study, the models of 3D protein structure enabled the researchers to see that as well as interacting with actin, myosin molecules interact with each other and work in pairs. These interactions are particularly important when the muscle relaxes, because they improve energy efficiency. 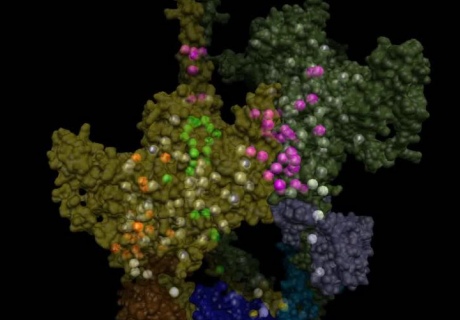 An image of the 3D protein structure of myosin. Coloured dots show where mutations have an effect

In the latest study, the team found that mutations which cause dilated cardiomyopathy typically alter the parts of myosin which play a role in contraction. Most mutations that cause hypertrophic cardiomyopathy also affect contraction in this way, and additionally affect these newly identified interactions, interfering with the heart’s ability to relax.

Dr Ware explained: “Today, genetic tests can identify the cause of these diseases in about one in three people. For other patients, the tests show a DNA mutation changes the protein, but we don’t know whether those changes are harmful or harmless. Our findings can be used immediately to refine this process and give doctors more confidence in saying whether a given DNA change causes disease.”

He adds: “We’ve also shown that over half of the mutations in myosin which cause hypertrophic cardiomyopathy lie in these critical binding regions. This shows the importance of mutations in this area.”

Identifying the genetic cause of a patient’s disease is important as it can help to identify whether they will pass it onto their children. Relatives of patients with cardiomyopathy often undergo regular and expensive heart tests.

This article was adpated from materials provided by the MRC London Institute of Medical Sciences. Around 600,000 in UK carry faulty gene that could lead to heart failure Research opens the door to more accurate genetic testing for inherited diseases Regular exercise can lead to heart disease misdiagnosis