Imperial researchers come out in force for Summer Science Exhibition Visitor to the Summer Science Exhibition

A knife that sniffs out cancer and technology for boosting signals from Mars are examples of Imperial research going on show at a prestigious event.

A knife that sniffs out cancer and technology for boosting signals from Mars are examples of Imperial research going on show at a prestigious event.

The annual Summer Science Exhibition is the Royal Society’s week-long free festival celebrating the cutting edge of UK science. Visitors are able to explore the science shaping our future and talk to the people making it happen.

Teams from imperial College London make up around a quarter of the groups that are exhibiting this year, with around twenty exhibits in total. Imperial research groups come from the Departments of Materials, Surgery & Cancer, and Chemistry, along with two teams from Physics.

Professor Neil Alford, Associate Provost (Academic Planning) and an exhibitor at the Festival, said: “There is a lot of planning and leg work involved in getting an exhibit together for the Summer Science Exhibition. It really is a labour of love. However, the outcomes are really rewarding, and like our own Imperial Festival, it gives researchers a valuable opportunity to engage with the public. On behalf of my fellow exhibitors, I’d like to welcome you to come along to this year’s event and see what we’ve been working on.”

The iKnife: Step into a surgeon’s shoes and discover how our researchers are mapping cancer's secret chemistry 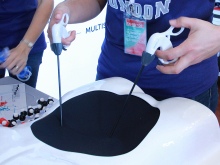 Guests attending this exhibition on cancer’s chemistry will meet the inventor of the iKnife, Professor Zoltan Takats, from the Department of Surgery & Cancer, and hear how this technology can help surgeons to remove cancerous tumours.

Using electricity, the iKnife cuts into tumours, which produces smoke. Special technology then analyses the smoke for clues of cancer.

Visitors to the stand can step into the shoes of a surgeon by performing an incision with a mock iKnife and uses a device to determine the chemistry of a sample called mass spectrometer to determine what parts of a tumour to remove. Guests can also have a go at building the network of molecules, cells and tissues that make up tumours. 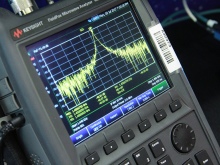 A team of researchers from the Department of Materials, led by Professor Alford, will be showcasing maser technology at the Summer Science Exhibition.

Maser technology came before laser technology, but instead of amplifying visible light like lasers do, masers amplify microwave signals.

They are currently used by organisations such as NASA to amplify signals transmitted from their technology such as the mobile science lab - or Rover - based on the surface of Mars.

Masers have been in existence for more than 50 years, but the drawback has been that they can only operate in below freezing temperatures. A breakthrough at Imperial now means that the technology can be used at room temperatures, paving the way for their wider use in society.

A replica of a maser device will be on display to visitors and they’ll be able to get up close to a replica maser crystal, which has been made by the jewellery manufacturer Swarovski.

Molecular cages are a class of materials that have permanent and accessible holes within a single molecule. They can be tailored to capture and store certain molecules by changing the size of the hole within the cage. Their uses include the removal of harmful contaminants from air and making porous liquids – liquids with holes.

Visitors to the Royal Society exhibit can learn more about molecular cages with expert guidance from researchers from the Department of Chemistry.

There are a variety of ways to get hands-on with the team, including using computer modelling to design new cages, exploring 3D printed models, and testing your new skills in a race against time to assemble a cage and capture harmful gases.

How to make a supernova

Exploding stars, or supernovas, are some of the most energetic events in the universe. The possibility of studying these events is rare, however, scientists can create miniature versions in labs with extremely powerful lasers.

Researchers from the Department of Physics will be taking exhibition-goers through the journey they take to understand supernovas in the lab and also some of the background science involved, from shockwaves to manipulating plasma, the ‘fourth state of matter’.

They will also be talking about working with some of the most powerful lasers in the world that can deliver 1,000 times the power of the entire US national grid in just a fraction of a second, over an area smaller than a pinhead.

The first detection of gravitational waves in 2016 sent shockwaves through the science world and opened up a new way for us to understand the universe. The feat took an amazingly accurate experiment, which measures distortions in spacetime of only a million millionth the width of a human hair.

Why do we need such sensitive devices to measure such massive events like black holes merging? Researchers from the Department of Physics will demonstrate the ideas behind gravitation waves and give participants the chance to listen out for black holes themselves.

They will also be talking about the next phase of gravitational wave detection – the LISA space probe, which has just been given the go-ahead to be launched by the European Space Agency in the 2030s.