A team of Imperial researchers has developed a tool which 'lights up' when it detects the chemical signature of harmful bacteria in the lung.

In a clinical first, the group from the Department of Medicine used the tools, called cell-free biosensors, to test samples of sputum (phlegm) from patients with cystic fibrosis (CF).

Biosensors are based on engineered DNA circuits, designed to detect changes in their environment, such as the presence of chemicals, or changes in pH or temperature.

These tools, which harness the biological machinery inside cells, can be used to quickly spot chemical traces of active microbial colonies in samples from the lung and could help to accurately diagnose bacterial infections in vulnerable patients.

In a small, proof-of-concept study, the team found that their biosensors could accurately detect markers of Pseudomonas bacteria – a leading cause of chest infections in people with weak immune systems or chronic conditions, such as CF – and were as sensitive as existing chemical diagnostic tests but could potentially be cheaper and easier to use.

The researchers are hopeful they could eventually develop their cell-free sensors into a range of rapid diagnostic tests which could be used either at home, GP surgeries or in hospital clinics or even in remote areas of the world with limited access to hospital diagnostics, at a fraction of the price of existing tests.

Professor Paul Freemont, co-founder and co-director of The Centre for Synthetic Biology and Innovation at Imperial, said: “The driving force behind this research is to show that these tools work and could be used to detect particular diagnostic markers associated with infection.”

He added: “By applying an engineering approach to biology, these systems could be altered to sense for any microbe we choose. The possibilities for public health and cost-savings for health systems could be considerable.”

Biosensors have emerged through the growing field of synthetic biology, with scientists tweaking living cells to respond to certain conditions, such as the presence of a chemical compound. 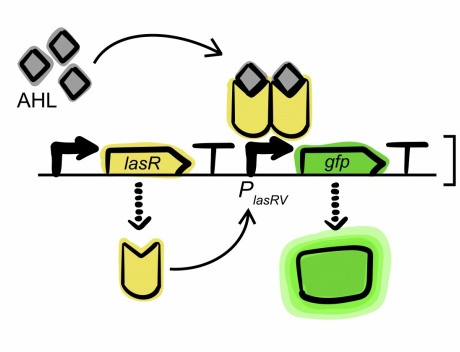 The engineered DNA circuit: when the bacterial molecules (AHL) are present they trigger the production of a coloured protein (GFP)

At the heart of the technique are lengths of engineered DNA which, when inserted into a living cell, act as a circuit. If the right signal – such as a specific chemical compound – is present, then the circuit is switched ‘on’ and the cell produces a signal in the form of a coloured output, in this case a green fluorescent protein. If the substrate is not present, then the circuit remains ‘off’ and there is no signal.

In the latest study, published this week in the journal ACS Synthetic Biology, researchers report on using a ‘cell-free’ form of sensor to test clinical samples for the first time. Instead of being contained within the membrane of a cell, the engineered DNA circuit and cellular machinery of their sensors are free-floating in a solution.

The team engineered their sensor’s circuit to respond to a molecule produced specifically by the bacterium Pseudomonas aeruginosa. These bacteria release a chemical signature in order to communicate with bacteria around them and to sense how many of them there are. As they replicate, more cells release the signature, and so the concentration of the signal increases, giving the bacteria an idea of the state of their population.

Previous studies have revealed levels of this same P. aeruginosa signature were higher in hospitalised patients than those with stable condition.

Samples taken from the lungs of patients, either with or without P. aeruginosa infection, were screened by adding them to tiny wells containing solutions of the biosensor. After four hours the samples were tested for green fluorescent protein – a sign that the bacterial signature was present.

Analysis revealed that the cell-free biosensor was able to detect the bacterial signature with the same accuracy as existing diagnostic tests, called liquid chromatography tandem mass spectrometry (LC-MS/MS). The biosensors were able to detect the concentration of the signal within a close range to LC-MS/MS.

Currently, a major limitation for the cell-free sensors is the amount of time taken to prepare samples before testing, with lung sputum samples needing to be ‘cleaned up’ with the removal of biological materials which could interfere with the results.

In addition, as the DNA is synthetic – engineered in the lab – it would need to be disposed of carefully, with concerns around potential to contaminate the environment or pass to other organisms.

A point of care test could transform the way in which we monitor patients, allowing us to treat early and personalise therapies

However, according to the researchers, the approach could offer significant cost-savings compared to the existing LC-MS/MS detection method. If suitably scaled up, using similar cell free biosensors could work out to be a fraction of the cost per sample.

Professor Jane Davies of the NHLI and an honorary consultant paediatrician at the Royal Brompton Hospital said: “Pseudomonas is the major infection in patients with cystic fibrosis and is closely linked to the severe lung disease which develops over time leading to premature death.

“At the moment, we only have opportunities to detect infection when patients come to clinics, perhaps every 2-3 months. A point of care test could transform the way in which we monitor patients, allowing us to treat early and personalise therapies.”

The group is now exploring how to take the technology forward and develop working prototypes, as well as a test to detect the signal in a patient’s urine. If the biosensor solution could be freeze-dried, this could even potentially take the form of a credit card-sized paper-based test, which would be affordable and ready for use in the field.

Loren Cameron, a PhD student in Freemont’s lab and one of the study authors, said: “Now we have shown these types of biosensors can be used with clinical samples, the next step is to refine our approach. We hope that in future, tools like this could be used to help test for the presence or severity of bacterial infections.” Ms Cameron is one of five postgraduate students funded as part of the Cystic Fibrosis Trust’s Strategic Research Centre for Pseudomonas infection.

Ke Yan Wen, a graduated PhD student from Freemont’s lab and also one of the lead authors, said: "We believe that cell-free systems are a promising platform for developing biosensors, since they are easy to use, produce a rapid response, and can be stored long-term in normal conditions.”