Chemotherapy for one type of leukaemia could be improved by giving patients a drug currently used to treat an unrelated condition, new research shows.

Acute myeloid leukaemia (AML) is an aggressive cancer that stops healthy blood cell production. Chemotherapy is the standard treatment, but improvements are needed as the five-year survival rate in patients older than 60 is only 5-15 per cent.

Since the drug is already approved for human use for a different condition, we already know that it is safe.

Now, by studying how leukaemia cells infiltrate bone marrow, where blood cells are created, researchers led by a team from Imperial College London have made a crucial discovery.

Studying mice and human samples, they found that certain areas in the bone marrow support blood stem cells, and when these are overtaken by leukaemia cells, these stem cells are lost and production of healthy blood is significantly reduced. This can cause anaemia, infection, and bleeding in patients, and affects the success of chemotherapy.

Crucially, the team also discovered that a drug already approved to treat a condition known as iron overload can protect these important bone marrow areas and allow blood stem cells to survive. Their results are published today in the journal Cell Stem Cell. 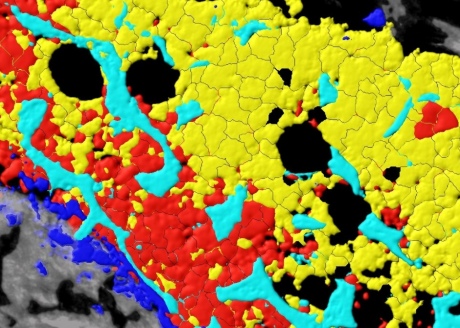 The study’s lead author, Dr Cristina Lo Celso from the Department of Life Sciences at Imperial, said: “Since the drug is already approved for human use for a different condition, we already know that it is safe.

“We still need to test it in the context of leukaemia and chemotherapy, but because it is already in use we can progress to clinical trials much quicker than we could with a brand new drug.”

The researchers are now hoping to team up with clinicians to begin human trials of the drug for AML. Understanding whether this drug is a viable option should take less than five years, as opposed to the 10-15 needed if an entirely new drug is developed.

The team conducted the study by filming the invasion of leukaemia cells into bone marrow in mice. This approach allowed them see both large overviews and incredible details of the bone marrow, revealing phenomena happening deep inside the bone marrow - a view usually inaccessible to direct observation in patients.

The group discovered that one of the spaces hit particularly hard by leukaemia were special regions of blood vessels where blood stem cells reside. These are the basic blood cells that can become all other types of blood cells, including red and white, generating billions of new cells every day of our life.

For this reason, these special blood vessel regions are vital for producing new healthy blood, and their destruction by leukaemia allows the disease to progress. The loss of these vessels was confirmed in humans by studying patient tissue samples. 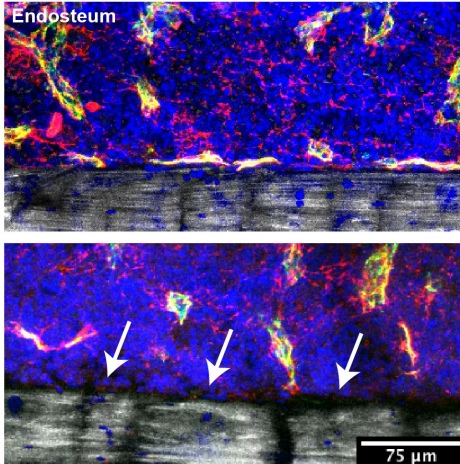 To see if they could protect the vessels, the team tested a drug called deferoxamine. The drug is used to treat iron overload, which can happen for example when a person receives multiple blood transfusions.

Deferoxamine has also been used in the treatment of myelodysplasia, a disease related to leukaemia where young blood stem cells do not mature into healthy blood cells. Other researchers who contributed to this project, and are now based at Imperial, Max Plank Munster, and Oxford Kennedy Institute, showed that this drug increases bone marrow vessels in aged mice.

Dr Lo Celso’s group now found that the drug had a protective effect on the blood vessels in AML, allowing the rescue of healthy blood stem cells. Moreover, the enhanced vessels improved the efficiency of chemotherapy.

Delfim Duarte, a physician and PhD student who performed most of the experiments published today, said: “Our work suggests that therapies targeting these blood vessels may improve existing therapeutic regimes for AML, and perhaps other leukaemias too.”