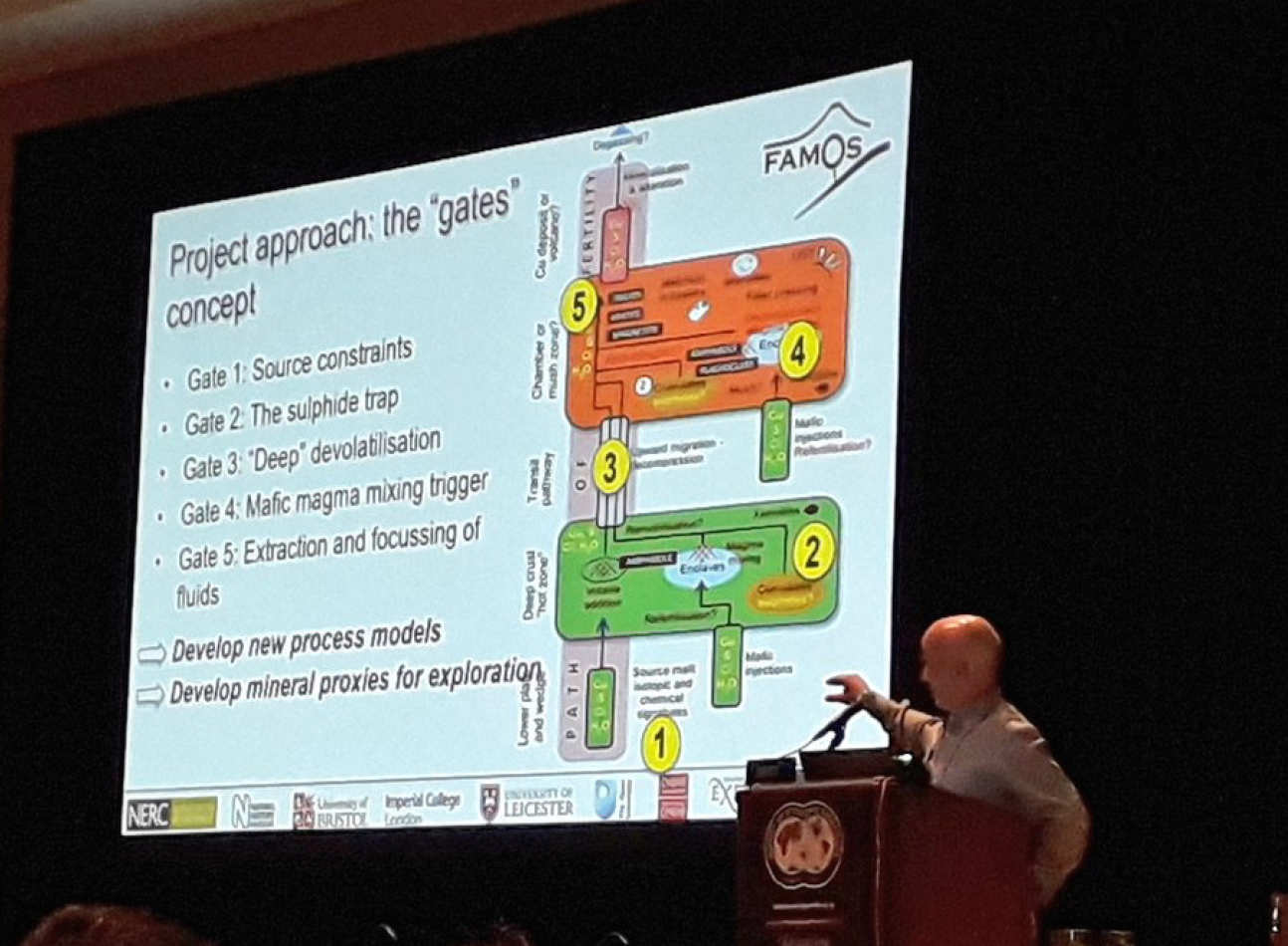 From 25th to 28th September, Jamie Wilkinson and NHM postdoc Matthew Loader presented results of an ongoing study on igneous mineral chemistry from porphyry ore systems to project sponsors Quantum Pacific Exploration, in Santiago, Chile. This was the third 6-monthly report on project progress, with the main outcomes also being reported to the NERC FAMOS project consortium. Phil Mannion and PhD students Ale Chiarenza and Jonathan Rio attended the annual meeting of the Society of Vertebrate Paleontology (SVP), held this year in Albuquerque, New Mexico (17–20 October). In addition to lunch at Los Pollos Hermanos, and resisting throwing pizza on Walter White’s house, Phil and Ale both gave talks on the K/Pg mass extinction, whilst Jonathan presented a poster on an extinct alligator relative that roamed the UK 40 million years ago.

Dick Selley gave a lecture on shale gas & oil to the Petroleum Exploration Society of GB.

Kamal Singh was an invited speaker and gave a range of talks outlining his research at the following events: the Interpore 10th Annual Meeting and Jubilee Conference 2018 held in New Orleans, USA; at the Imaging the Microstructure of Reservoir Rocks in 3D and 4D Workshop, 80th EAGE conference & Exhibition 2018, Copenhagen, Denmark, and in Brazil at the Brazilian Synchrotron Light Source (LNLS) on 25 July 2018, Petrobras/CENPES on 26 July 2018 and IBM Research Centre on 27 July 2018. Chris Jackson gave a department seminar at the Department of Earth Sciences, University of Plymouth (19th October). He talked about his recent filming experiences at some of the worlds most celebrated volcanoes, including Nyriagongo, Stromboli, and Vesuvius.

PhD student Robin Thomas visited the Swedish Nuclear Fuel and Waste Management Company (SKB) and the Royal Institute of Technology (KTH) in Stockholm, on 4th-5th October, and gave a talk entitled “Geomechanical discrete fracture modelling: 3D growth and coupled processes”, describing some of the research that he has been doing with Adriana Paluszny and Robert Zimmerman as part of the NERC-funded HydroFrame project.

The International Minerals Processing Congress (IMPC) is organised every two years in different countries across the world and this year it was held in Moscow. It continues to be the biggest and most important conference in minerals processing, with normally more than a thousand attendees. The Advanced Mineral Processing Research Group (AMPRG) had four oral presentations and one poster. Presentations from Izzy Mackay, Diego Mesa, Dennis Vega and Francisco (Pancho) Reyes were well received with lots of follow-up questions during the coffee brakes. In addition, Jan Cilliers presented at the Education Workshop and Pablo Brito-Parada at a workshop that focused on the Grand Challenges of Mineral Processing.


During the conference banquet Pancho was awarded the “Young Author Award”, a prize the organising committee gives away to the best ten pieces of work from young authors. Earlier that day it was also announced that Pablo Brito-Parada was elected as new member of the Council. Congrats to both!

Congratulations to Dr Qinghua Lei (ESE alumnus), who was selected by the International Society for Rock Mechanics and Rock Engineering (ISRM) as the winner of the 2019 Rocha Medal.

Dr Lei conducted his PhD research on the “Characterisation and modelling of natural fracture networks: geometry, geomechanics and fluid flow” under the supervision of Dr John-Paul Latham and Dr Jiansheng Xiang. On 10 October we announced winners of postgraduate prizes at a special evening reception. Congratulations to Lukas Mosser, Oscar Calderon-Agudo and Stephen Watkins. Read about the awards, winners and reception.

Ian Bastow and his US-based collaborators in Montana and New Orleans have been awarded a $1M grant by NERC and the US National Science Foundation to study rifting in southern Ethiopia and Northern Kenya.  As part of this project, the Turkana Rift Arrays Investigating Lithospheric Seismology (TRAILS), Ian will be building earthquake monitoring stations in the Lake Turkana region in January 2019.  The work will also be supported by a recently-awarded £100k Global Challenges Research Fund (GCRF), which will support investment in earthquake monitoring infrastructure and research capability of the Universities of Addis Ababa (Ethiopia) and Nairobi (Kenya).

Ian has also won a £800 grant from the Royal Astronomical Society for his ongoing research and outreach in Cyprus.

Kamal Singh’s work on imaging the dynamics of multiphase flow in carbonate rocks is showcased in the Diamond Light Source 2017/18 Annual Review (in which the highlights of scientific research conducted during the academic year 2017/18 are presented).

ESE staff Dr Philippa Mason and Prof Sanjeev Gupta have mentored musicians to create new works inspired by our Solar System, based on Holst’s The Planets. Find out more on Sound UK, or read about it in the Guardian.

Dick Selley participated in a workshop on the Newdigate earthquakes organised by the Oil & Gas Authority.

Prof Dominik Weiss and Jay Bullen were in West Bengal during October to present at a workshop entitled 'Towards a new generation of arsenic treatment plants in India.' The workshop was organised jointly by Prof Weiss and Swachchha Majumdar from the CSIR-Central Glass & Ceramic Research Institute in Kolkata, and funded by British Council India and the Newton Bhabha Fund. In this workshop participants discussed the public health crisis surrounding arsenic contaminated waters, including future strategies to overcome the current challenges in providing safe drinking water.

Following their workshop on a new generation of arsenic treatment plants in India, Jay Bullen and Dominik Weiss spent three days conducting field work, cross-calibrating two new speciation techniques for determining the distribution of arsenic between +3 and +5 oxidation states. The first was a novel chemosorbent resin developed at Imperial College, for use as a syringe filter device. The second was Anodic Stripping Voltammetry with a gold microwire electrode, an electrochemical technique, with sub-ppb detection limits, following upon work by Dr Pascal Salaün and his group at the University of Liverpool.

In collaboration with colleagues from Portugal, Spain, and France, Phil Mannion initiated a new palaeontological fieldwork program in the Paleogene of Portugal, as part of a Royal Society grant. A short reconnaissance trip yielded fossils of mammals, crocodiles, birds, turtles and fish from an approximately 55 million year old site. A longer trip is planned for Spring 2019. The Imperial Student Chapter of the Society of Economic Geologists (SEG) ran a trip to Namibia on the 2nd to 13th September. The field trip was attended by six Imperial students (Emily Brugge, Jonathan Coad, Jordan Griffiths, Chetan Nathwani, George Nicholas and Jay Ward), two external students, five industry geologists and one academic. The trip visited nine mineral deposits across Central and Western Namibia of different commodities and stages in development. Student attendance at a highly subsidised rate was possible due to generous funding from society grants and industry.

Kamal Singh had the great opportunity to visit the newly-built fourth generation synchrotron light source in Campinas, Brazil and learn about ultrafast three-dimensional imaging at the nano- to micro-meter scale, particularly useful for investigating the dynamics of multiphase fluid flow in rocks at reservoir conditions.

Alistair Boyce and Mitch Liddell, PhD students supervised by Ian Bastow, both passed their PhD vivas with minor corrections and have both now taken up post docs at the Universities of Cambridge and Alberta, respectively.  Congratulations Drs. Boyce and Liddell!

Congratulations to (Dr!) Alex Coleman of the Basins Research Group (BRG), who successfully passed his viva with no corrections (4th October). Alex’s PhD, which was co-supervised by Chris Jackson and Oliver Duffy (UT Austin) was entitled ‘Extensional Strain in Salt-Influenced Basins’.

A number of alumni visited the RSM recently representing BP, to present career opportunities to our students.